Before this starts, know this: We — we as in HUMANS — are on the cusp of a moment. A moment that, should it occur, should even a glancing version of it occur, will produce a reverb that will demolish the lithosphere into, oh, I don’t know, about 10 billion pieces, if I had to guess.

Shawn “Jay-Z” Carter and Aubrey “Drake” Graham, the two most visible rappers on planet Earth, have almost inexplicably and without (at least publicly knowable) reason ended up on the precipice of an interstellar rap battle.

Drake, horns-of-fire eyebrows and all, called Jay-Z’s art-reference rap “corny” in an interview. Jay-Z, especially offended and surprisingly charged by the accusation, swooped down from the ionosphere on the back of his sun dragon and, eager to smite, fired exploding chain saws at Drake in a verse on a song called “We Made It.” Here they are:

Sorry Mrs. Drizzy for so much art talk
Silly me rappin’ ’bout shit that I really bought

And so now the world waits.

Because we are on the cusp of a moment.

Every year for the last decade during the days between November 11 and December 20, I have attempted to teach middle school ESL students about all of the whole of the everything of the entirety of outer space, from its birth to its (hypothetical) end. This, as one would expect, is a bit of a task.

Sometimes it’s for reasons you expect (because that shit is hard, bro). But sometimes it’s for reasons you do not. The best: One particularly enjoyable student asserted that, given that our understanding of the cosmos beyond Mars is almost entirely theoretical, it was irresponsible of me to completely disregard the plot of Killer Klowns From Outer Space, a movie on Netflix about aliens who look like Earth clowns and wrap people up in cotton candy and then suck their blood. “If nobody knows what’s out there, how can you say with certainty that there isn’t a planet dense with a population of clowns that want to murder me?” is a polished version of her position. “Well … it’s just … I mean … I don’t know, man” was my exact rebuttal. (I watched Killer Klowns From Outer Space. It’s terribly creepy. Don’t watch it.)

Still, during that segment of the curriculum, the one thing we go over that every kid learns is something called the Hertzsprung-Russell diagram. Here is the exact one I have for them in class: 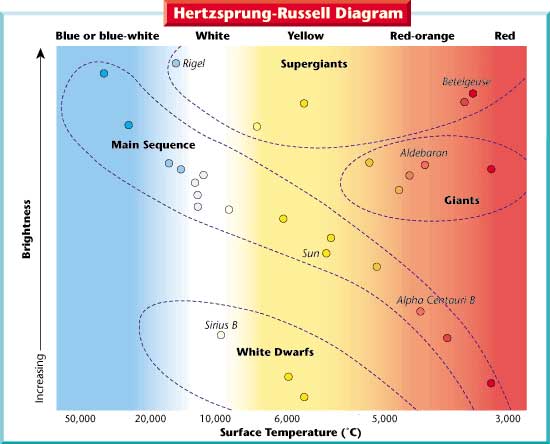 A general explanation: The H-R diagram plots stars based on brightness vs. heat. There are four main groups: the supergiants, which are the biggest and, on average, the brightest stars; the giants, which are a little smaller though still impressive; the main sequence stars, which are regular, ordinary-size stars; and the white dwarfs, which are just remnants of stars and not real actual stars anymore.

Now, in class this particular discussion would be followed by an activity in which the students are given characteristics of stars found in the known universe and then asked to place them where they belong on the chart. But since this is not class — this is Grantland — I present a variation. 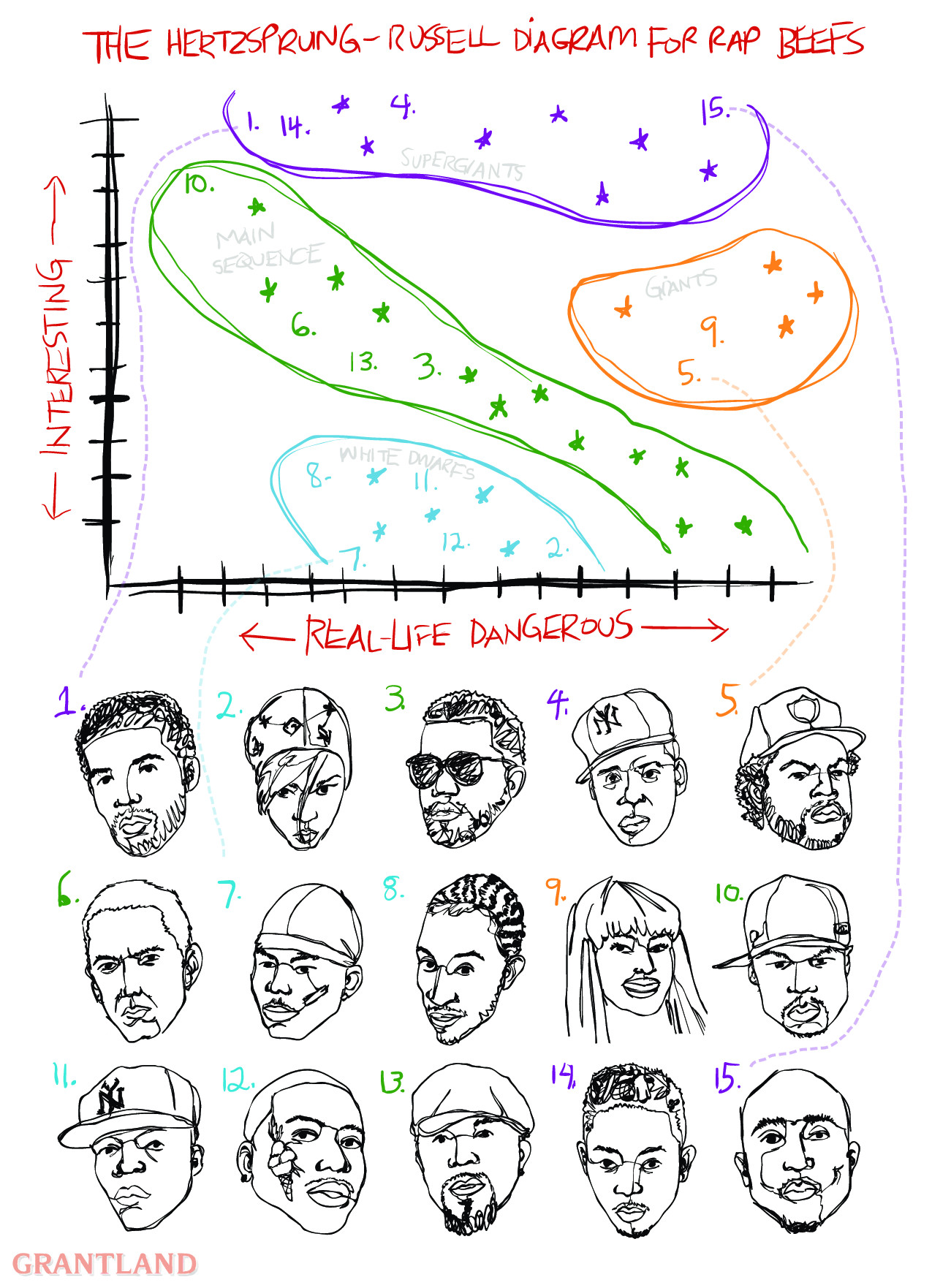 It’s the same as the normal one, except it’s different.

Important: The beefs listed here are not all the beefs that have ever existed in rap, same as the H-R diagram doesn’t plot all the stars that have ever existed. The charts are used as reference, a guide for you to refer to when considering the parameters of, say, 2007’s Gillie Da Kid vs. Lil Wayne debacle and how it measures next to, say, 1992’s P.M. Dawn vs. KRS-One shenanigans.

The numbers scattered in the H-RDFRB correspond with the faces underneath it, and the faces represent the winning side of whichever beef it was that he or she was involved in. Explanations:

1. Drake vs. His Feelings: Top tier. Probably the most interesting rap battle of our generation, which, depending on how you process the world, is something you will consider very advanced or very disappointing.

2. Lil’ Kim vs. Foxy Brown: Lil’ Kim wins this one because I actually had to Google “is Foxy Brown alive” while researching this. (She’s alive, FYI.)

5. Ice Cube vs. N.W.A: They argued over money. Ice Cube recorded “No Vaseline.”

6. Eminem vs. Benzino (and The Source): This one almost certainly would’ve fallen into the the supergiants category in 2002. But Eminem the brand has swelled to such an alarming size that his moves are barely even interesting anymore and Benzino is Benzino, so this one plummets down into the cellar.

7. Nelly vs. Chingy: Mostly because I just wanted you to have a good baseline for what a very, very, very bottom-level white-dwarf rap beef looks like. (Note: In 2004, this beef was definitely a main priority for me. I’m saying, do you even know how many times I watched the “Batter Up” video, bro?)

9. Nicki Minaj vs. Gucci Mane: This one rates this high on interest because Gucci was on Twitter telling everyone he had sex with Nicki Minaj and that he had proof of it and for just a few moments somehow it kind of seemed like he was telling the truth. Know this: If Gucci Mane ever in any capacity proves that you had sex with him, he wins. That’s the most vicious blow. One time, one of my sons uppercut his twin brother in the wiener. This would’ve been worse than that. If he would’ve actually somehow produced a video or even a picture of him and Nicki Minaj engaging in intercourse, we would’ve had to put her in a rocket ship and shoot her toward a corner of outer space.

10. 50 Cent vs. Ja Rule: What many consider to be the greatest takedown of the modern era. It was definitely in the supergiants category while it was happening, but it falls out here because 50 is probably, like, only the 40th most popular rapper right now.

12. Gucci Mane vs. Face Tattoos: To crib a line from a 2004 Demetri Martin comedy special: This is a good example of how you can be a winner and a loser at the same time.

14. Kendrick Lamar vs. All the Guys He Mentioned on “Control,” But Mostly Drake Because Drake Was the Only One With a Higher Perch: Oh, man. Rap nerds had hella boners when this song came out.

Five New(ish) Beefs That Belong on the Diagram

Lil Wayne vs. Metaphors (main sequence): If Tha Carter IV has fewer than 200 of those stupid “I got presidential concentration / Call that a Ford Focus”–style lines, then that’s a win for Wayne.

Nas vs. Evolution (giant): Has any rapper ever gripped more desperately to a time period, to what he or she at one point represented, than Nas? Nas is a total bore now. His fight against evolution is history’s longest war.

Wale vs. Everybody on Earth, I Guess (white dwarf): I just don’t get it. Wale seems like a decent (albeit tightly wound) person. Why does everyone hate him? I interviewed him at a concert once. He was nice. T-Pain was there. I talked to him, too. T-Pain is way more of a dick than Wale.