The corner of Highland Avenue and Hollywood Boulevard is a particular kind of Los Angeles hell. On the pervasively mundane Walk of Fame, families of bedraggled tourists light candles for Michael Jackson. Out in front of the Chinese Theatre, SAG-card holders loaf around shilling for paid photo ops while dressed up as dime-store cowboys and wilted, unconvincing Batmen. And the Madame Tussauds wax museum promises a dispiriting sight of one of our greatest artists. “Now in Hollywood for a limited time: Tupac.”

But above the intersection, there is a Dave & Buster’s. And on a recent, scorching weekday afternoon, this cool, dim branch of our nation’s reigning emporium of good, clean fun is being torn apart by the young Vince Staples.1

Mentally, we’re a world away from Long Beach, Staples’s home, the streets and deaths of which are so evocatively rendered on his ambitious, blistering, double-album debut, Summertime ’06.2 Practically speaking, on a good day, we’re just a 45-minute drive away. But none of that matters to Vince right now. What matters to Vince right now is that he is whipping our asses in Pop-A-Shot.

“Oh, he hot now,” Staples — in black jeans, black denim jacket, and an artful pair of the kind of boots Luke Skywalker might favor — shouts out, between sinking basketball after basketball in the mini hoop. “Oh, he hot now!” For the third time in as many rounds, he’s soundly beaten both myself and his manager of four years, Corey Smyth, an industry veteran who’s worked with Talib Kweli and Dave Chappelle. Seeing that this time he’s practically doubled our scores, he turns to crow.

We move on to the first-person shoot-’em-up Time Crisis, during which Vince makes a confession: When he was a kid, this very video game made him want to be a cop. For, like, two weeks. “I told my mom. She said, ‘Don’t ever say that again.’” Walking away after decapitating a few bad guys, he clucks to himself, quietly: “That’s messed up. You’re not supposed to shoot people.”

Courtni, his gregarious publicist, shows up, assuring her own dominance in Skee-Ball: “You don’t want these problems!” she shouts. True to her promise, she goes up big on Vince. With two balls left, he needs to land one in the 10,000 hole to win — the real tricky one, in the upper, upper left corner. Coolly, without a word, he sinks it on the first try. As Courtni faux-fumes, he shrugs, barely cracking a smile.

“Some people were born for certain things. I was born for victory.” 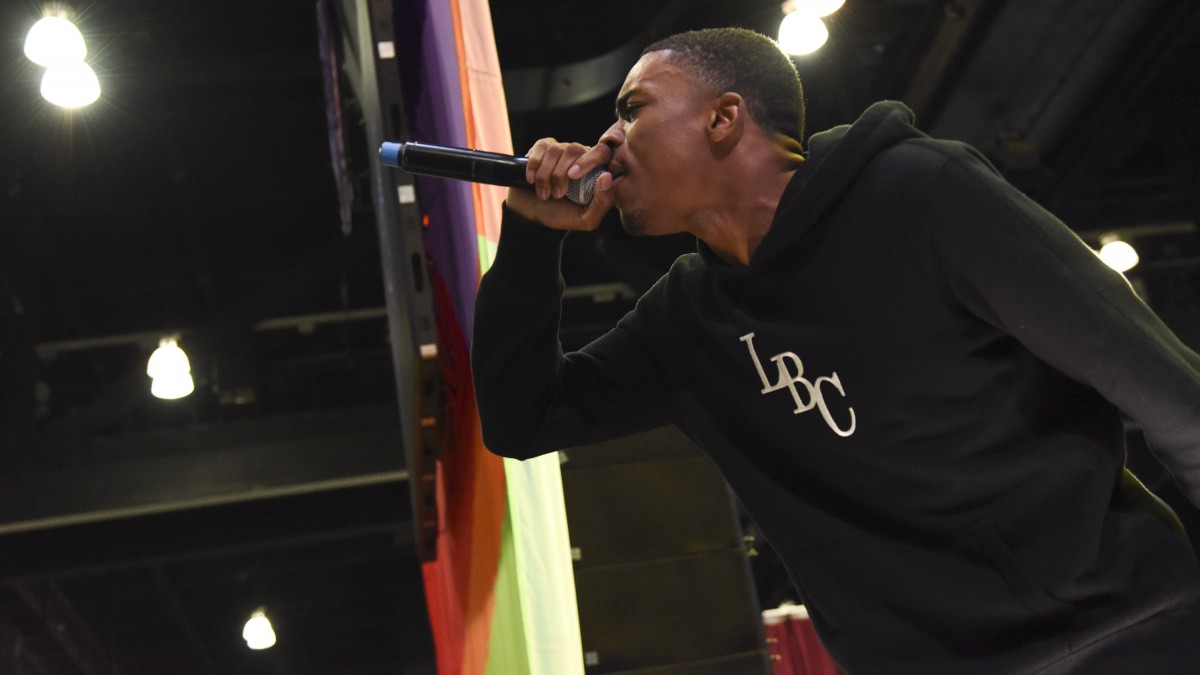 During the media cycle for Summertime ’06, Staples has turned out to be a thoroughly compelling presence. Police brutality, the LGBT movement, the NBA’s collective bargaining agreement? It doesn’t matter. Lob questions at him and he’ll go at it.3 A day shy of 22, he can still be said to be precocious. A conversation with him can feel — in as pleasant a way as this can be interpreted — like you’re the substitute teacher being braced by the wiseass in the last row.

Especially when it comes to the Clippers, who he loves, and Chris Paul, who he hates. Charmingly, he’s managed to spread the anti-CP3 gospel on various ESPN properties, including SportsNation and, best of all, Grantland’s own NBA After Dark.

“Just being a hundred percent honest, [starting out] I did not care about music,” he says 15 seconds after we sit down. “Not even a little bit.”

The time in question was the early ’10s, and Staples was an aimless teenager hanging around L.A. kids with big rap dreams. Almost as a lark, he’d punch in, usually not bothering to execute his ideas in full. “Like, 48-second songs,” Smyth recalls. “That was Vincent’s favorite shit back then.”

His friends would end up all right; eventually they’d become known to the world by the aliases Mac Miller and Earl Sweatshirt. But Staples’s own skill and potency, as displayed on a string of mixtapes, was evident, too. In 2013, No I.D. — the quietly ubiquitous behind-the-scenes operator best known for mentoring a baby-faced Kanye West — signed Vince to Def Jam. And through a gang of bangers, he became a commodity.

“Hands Up” was fearless agit-prop: “North Division tryin’ stop my blackness.” “Blue Suede” laid a fine patina of anxiety onto West Coast hardcore hip-hop’s classic skreeeeeee: “New shoes with the blue suede / young graves get the bouquets / hope I outlive them red roses.” And yet, throughout the rise, Vince stayed ambivalent. Goddamn: The album’s out and being fully fawned over, and Vince is still ambivalent.

“I always treated it like it was a job,” he says. “I was never late or nothing. I just didn’t care. I don’t like attention. And that’s 90 percent of why people strive to do what we do now. Attention. Or the money. Which they’ll be rudely awakened by. We don’t get no fucking money. We don’t even get to own our own songs nine times out of 10.”

This is, today at least, his primary point of interest: The way musicians get built up into idols; the way fans hang on their favorite rappers’ every word or wardrobe choice. And in his opinion, it’s the reporters who are responsible — mindlessly, callously constructing idols. They ask Kendrick Lamar to weigh in on Ferguson but don’t canvass the communities of St. Louis County for opinions, he laments. They say they care but never donate to the funeral costs when another kid is killed in the streets. Ultimately, though, he’s not as interested in journalism as he is in a more personally existential concern. “It’s like, what is a rapper? Who are you? What do you do for me? You make songs and you disappear in five years. If that. You do nothing.”

I feel that he’s baiting me. Much of the excitement around Staples’s arrival is his willingness — and ability — to swim in deep waters. More than a decade since he was an industry also-ran, Run the Jewels’s Killer Mike has developed a loving new audience by speaking his mind and doing it beautifully. Staples is just barely of legal drinking age, and, amazingly, already embracing his platform.

Didn’t you ever hear anything in rap music that you loved that affected you?

He scoffs. “Why would I look up to Young Jeezy? ’Cause he made money? I don’t care about money. What has he ever said?”

OK then. I go back to the infallible ones. Didn’t you ever listen to Public Enemy?

“Never. I would never do that.”

“Never! I’m 21 years old. My mom was [listening to that]. Why would I listen to N.W.A if I’m not listening to my parents? Public Enemy would mean nothing to me when I was growing up. N-​-​-​-​s wasn’t marching in Long Beach.”

He’s not putting me on. Not necessarily, at least. Staples wasn’t a hip-hop nerd growing up; even the historical weight of his legendary label, Def Jam, doesn’t mean that much to him. He says he never listened to Straight Outta Compton, at least not actively. Yet more than once, he’s expressed a fondness toward Young Dro and the summer of 2006’s fleeting, but perfect, “Shoulder Lean.”

That said: Of course he sees hip-hop as a vessel. The album is dedicated, implicitly, to those he grew up with in Long Beach. On Instagram, next to a rendering of the murky waters of the album’s cover art, he’s listed their names matter-of-factly:

Jabari, Chris, Shard, Tom, Richy, Tyson, Tony, Shelly, Phil, Marcel, Brandon, Steve, Jaron, Tay. Too many to name, too much to forget. Some lost to prison, some lost to Forest Lawn, some turned snitch. Some still here but it will never be the same. Bandanas, Stealing Levis and Nike Sb’s. Derringers and Sidekicks.

On the album itself, he channels his childhood a bit more obliquely; the menace he felt enveloping him when he was growing up lurks on nearly every track. And that acknowledgement, on its own, can serve as a dizzying gutting of the glorification of gang culture. Some rappers ride for their set, wearily or otherwise; some offer a direction, a voice at the front of the pack. Vince knows full well that simply invoking his long-ago friends’ presence has punch. He just wants to tell you how it was.

The next stop of the day is the greenroom of Revolt TV, a small music channel owned by Puff Daddy himself. In a few hours Vince is slated to perform. But for now he’s engaged in that tried-and-true show business tradition: waiting around.

Offering him some complimentary Cheddar Jalapeno Cheetos, Courtni wonders if he’s ever had them before. “Yeah. I live by Mexicans. You don’t know enough Mexicans.” Scrolling through Instagram, he spots Drake in a full bright-yellow sweatsuit standing with Andre 3000. “Look at Drake color-blocking. How can you not love hip-hop?” Hearing that the Revolt taping is at capacity — and, presumably, trying to get under Smyth’s skin — he asks, “Can I tweet out, ‘Not everyone can get in but I’ll be outside kicking it with the homies signing titties and Swisher guts’?”

It’s clear: The trappings of the rap stuff are silly to him. But that, he can laugh off. It’s the people who take it seriously that Vince worries about.

“We ask artists these things because we’re not comfortable with our own opinions,” he says of the political discussions that continuously swirl around him. “I feel like my opinion matters less than zero — it means nothing more than the next. Two years ago I was Mac Miller’s friend. Three years ago I was Earl Sweatshirt’s friend. Four years ago I was just that dude who hung out around Odd Future. I was that random unknown rapper that nobody cared about.”

So he waves off the delusions of grandeur. And yet, so far at least, he stays in front of journalists addressing the tougher issues.

“The reason all these things are happening,” he says of the deaths of Mike Brown, Eric Garner, and Walter Scott, “yes, it’s because of racism, yes, it’s because of classism. But it’s all because we don’t value people. In general. Whether you don’t value black people, white people, or poor people — you’re not valuing a person appropriately.”

The music of the previous generation changed lives. God bless those dinosaurs for still stomping around. But Nas by now is long since fully formed. He can never again be what Vince Staples is: a roiling cauldron, spilling over, figuring it out for the first time. In its recklessness and despair, his music feels true. Even better: It feels thrilling. Even better: It feels like veins pumping young blood.

At the end of the day, Vince would deliver a buoyant performance to a herded-in group of hip teens. They bopped and Snapchatted with great interest. Upstairs on a balcony during “Señorita,” two cross-cultural best friends in bucket hats moshed their hearts out. “Bounce! Bounce!” Vince would call out with a big smile, happy, in this instance, to play by the traditional rap rules.

But before he takes the stage, word gets in to the greenroom: Puffy’s been arrested. Apparently, police say there was an altercation at the grounds of UCLA, where his son plays football. Apparently, there are reports that Puffy assaulted an assistant coach or a trainer or something for being too harsh on his boy. And he did it with a kettlebell?! Apparently, Puffy’s being held in campus jail as we speak. Hearing the news, Vince can’t help himself. With all the winking sincerity he can muster, he finally gets overtly political. “What?! Let’s go, march! Free Puff! Free Puff! Why we in here? This is important!”