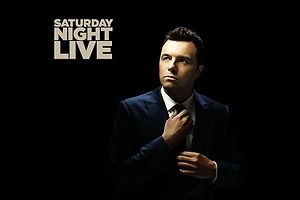 There are at least 8,910 reasons why people hate Seth MacFarlane. Among them: “It is quite a feat to stuff oneself full of so much bullshit,” “all he has to do is steal a bunch of memes off the Internet, reference a bunch of obscure movies, and be offensive without any social commentary,” that he is “a man who makes me want to throttle my television,” and “arguabl[y] racist,” and finally, profoundly, just because “he ignorant.” Pulitzer Prize winner Tom Shales hates him, perhaps most of all. But whether you object to MacFarlane on the basis of his joke-snatching or the simple fact that he looks like he sells computers at Best Buy, you cannot fault the guy on his Marty McFly impression. (You can fault him all you want for a Farrah Fawcett joke, though. Too soon! Perennially!) And so, like a ray of brilliant sunshine piercing through the thick gray clouds of giggity-giggity-crooning, MacFarlane’s opening monologue of the season premiere of SNL was redeemed for 1.5 seconds.

The rest was sort of like Sybil, the Musical. Which, hey! Is not a bad idea, especially if Elaine Stritch is available (only one person, by contrast, hates Elaine Stritch, and he or she appears to be an SEO bot). But despite that, this was not a bad season opener. In fact, MacFarlane was mostly smooth and unruffled, and did a pretty good job as the first host of a show that’s seen a few notable departures between last season and this one. And now I will crawl into my underground shelter, where the grenades you cast at me for saying so will bounce off the steel surface and land in my neighbor’s yard. And they have young children. So think twice, assholes.

This episode was predictably political: With the election looming, SNL has replaced Fred Armisen’s Obama with a hammier approach by Jay Pharoah. I have always liked Jay Pharoah, and last season I could feel his jitters more acutely than I did last Saturday. His promotion to resident commander-in-chief impersonator has to be reassuring for him, and allows Pharoah to loosen up a little bit; however, his debut in the opener (a sketch during which Obama acknowledged the fact that the country had fallen out of love with him a little bit, but brought out a series of cutaways to “secret weapon” Mitt Romney singing “Old MacDonald Had a Farm” to a room of stone-faced voters and trying to high-five the one who had tragically, somehow, lost his arms), while embodying a few more technical Obama traits vocally and facially, still came across a bit soft. This is not an impersonation (nor, perhaps, a president) that’s going to lend itself easily to LOLs: Pharoah and the writing team are going to have to think up new ways of milking aloofness for humor other than studding his speech with labored, gravelly ums.

Sudeikis’s Romney and Taran Killam’s Paul Ryan, on the other hand, shouldn’t have suffered for lack of material, but the only spear tossed in Ryan’s direction was a brief scene in which he lied about his sit-up rep record. Sudeikis’s Romney has never been anywhere near as good as his Biden, but I was disappointed by Killam’s Ryan because there could be so much there. Perhaps as Pharoah gathers steam, and if the writers push their sketch boundaries beyond the podium, there might be some good material ahead. I still think that Nasim Pedrad could play Paul Ryan, by the way. Paint her a six-pack and she’s good to go.

An Obama campaign commercial (“I’m Barack Obama, and I approve this message. But I’m not real proud of it”) skewering Bain Capital was a more nuanced election-season offering: Romney’s personal vendetta against Raymond McCoy (Kenan Thompson) — a worker who Romney stalked with layoffs all the way to an Orange Julius franchise — and Dan Whitehead’s (Bill Hader) ailing wife (he gave her herpes via handshake). MacFarlane’s first sketch appearance was in an installment of “Sex After 50,” during which brusque producer Roger Brush (Armisen) takes over for an absent, and presumably more gracious, female host, entreating guests to loudly proclaim their sexual problems into a microphone and then shaming them with answers that frequently circle back to his own testicles. This sketch, as always, was kind of a throwaway, so let’s zoom past it just slowly enough that you can hear Brush advise MacFarlane’s impotent 55-year-old character to prop his penis with a popsicle stick. Bill Hader, who introduces the guests and holds the volume-impaired microphone up to their embarrassed mouths, steals this scene with his creepy caramel voice (“He’s saying he can’t get his penis hard no matter how hard he tries”), and especially after the departures of Kristen Wiig, Andy Samberg, and Abby Elliott (this one was unanticipated — she left the cast in August), I’m glad to see him here. New cast members Kate McKinnon (who started late last season) and Tim Robinson both made appearances, but it’s hard to judge someone’s comedic prowess when they’re caught in the Brushfire.

What followed was something I’ve been looking forward to for a few weeks. We knew it was coming: it’s “Eastwood and Chair.” Hader does a great Clint Eastwood, and this skit basically wrote itself. The next sketch, for whatever reason, used the janky plastic frame of a slow day at Lids to house the beautiful picture of Bobby Moynihan as Psy, before the real Psy showed up. MacFarlane did his best playing a bleach-tipped mall bro who wielded power over a Psy-summoning button by the register, which I suppose is saying something because committing to the bizarre construct of this one had to have been a task. He had much more to play with as the corny teacher of a puppeteering class haunted by the PTSD of student Anthony Peter Coleman, formerly Private First Class, and his puppet likeness “Tony,” who smokes and describes the horrors of what happened the “rebel village five clicks down the road” while MacFarlane attempts to steer the topic back to puppet introductions like “I’ve got a sweet tooth!” Maybe it was the ease with which MacFarlane wore his feathery almost-mullet, or it might have been the dead-on earnestness of his take on the bumbling theater geek, but I liked him here. I did. Stop with the grenades. The children next door are cherub-cheeked and adorable and currently inches from my bunker.

Then we took a break for the soulful stylings of Frank Ocean (“Thinking About You”), wearing an outfit that prompted my husband and I to pause the program to have a heated argument about the merits of geometrical neon eagle shirts for around an hour and 45 minutes. He appeared to be (metaphorically) sweating blood during this jam, and I felt kind of like I was trapped in a hot, dark room listening to a loud recording of “Lilac Wine.” I thought that it was good without enjoying it whatsoever. SNL musical guests do that to a person sometimes. “Weekend Update” featured visits from Honey Boo Boo (Vanessa Bayer) and Mama (Bobby Moynihan) that sort of missed the mark other than the sound bite from Moynihan of “cat skeletons,” which I will use as my answering machine; a very promising debut from Second City alum Cecily Strong as Mimi Morales, a Get Out the Vote volunteer from Florida, with her Dominican boyfriend (Pharoah, great eyeball acting); and MacFarlane as Ryan Lochte. MacFarlane gave Lochte’s take on the fall TV schedule, and it was probably his best sketch of the night. Drinking from a juice box and shuddering with the discomfort of not being submerged in water, he awarded “swimmies” to programs like “Monkey Hospital” (Animal Practice) and “Goon” (Go On — honest mistake, billboard’s at fault). This role took advantage of MacFarlane’s vocal range without allowing him to venture into masturbatory territory.

Also fairly successful — well-written and, though it hinged on a single joke, not as draggy as some of last season’s hoary hangers-on (Gilly) — was MacFarlane’s stuttering drill sergeant who wavers between wanting honesty in response to his question, “Do I stutter?” and punishing his underlings for their candor. This fell into the “could have been worse” category, I think. Nobody’s really champing at the bit to poke fun at stuttering, and it would have been a trap to play up the actual word-flubbing too much. It’s not that MacFarlane was subtle, but he didn’t go so big as to make the skit more offensive than it inherently was. The next offering was no good: a Steve Harvey Show signature style makeover given to MacFarlane at his girlfriend’s (Bayer) suggestion, leaving him in a bald cap, giant mustache, and electric-blue suit as he participated in jokes about dinner at Mahogany (R&B music from the ‘70s! Soul food! Oof) and won a trip to Senegal to see a screening of Think Like a Man. Nope! Didn’t like this one! Let’s never revisit it ever again!

MacFarlane’s penultimate sketch, on a blind date with Nasim Pedrad, poked fun at the monsters of humanity who use the phrases “I’m all,” or “I’m like” to snatch the opportunity to use silly voices and one-liner pop-culture references in attempts at humor. Oh, wait. I see it now. This was not horrible, and indeed might have been pretty good, but for the fact that it was 300 minutes long. Aidy Bryant breezes through this one, says five or so words, and then departs — she was given the least air time of all the rookies, and it concerns me greatly that it was so teeny-tiny.

More Frank Ocean (“Pyramids”) — this time with John Mayer making guitar face and an arcade game interlude (why didn’t Lana del Rey use this tack? It looked relaxing), a very brief capper of an Amish commercial for wooden spoons with Tim Robinson and MacFarlane (mostly consisting of reading a www address: double-valley, double-valley, double-valley, time freckle), and we’re out. Is it possible that Seth MacFarlane is a lot less easy to hate when he’s performing other people’s material, as opposed to, uh, referencing it in his own? Stripped of the cutaways, the un-punchlines, and the cribbed Simpsons scripts, he could have been just some guy who hit the jokes right and didn’t struggle with the cue cards (the drill sergeant sketch was the only one where you could see his eyes tracking the words). I’ll give him the benefit of the doubt: I don’t think this provided viewers with the 8,911th reason to hate Seth MacFarlane. If you’re looking for it, it will probably arrive on September 30 with the eighth season premiere of American Dad.