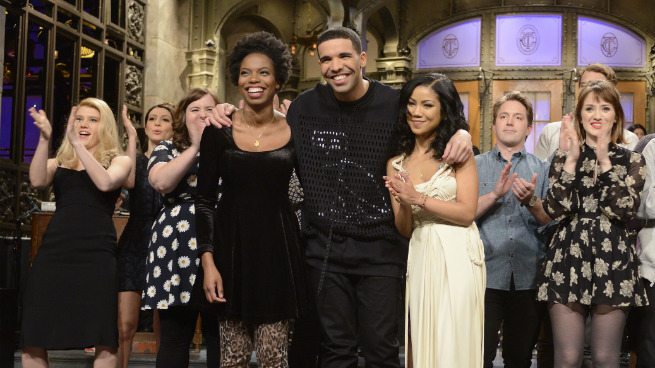 After a month’s vacation, SNL returned this week with Drake pulling double-duty as host and musical guest for the first time. Drake’s charms — his sensitivity, his sweaters, his champagne-pours — are so well documented and smothered in crushed-out awwws that a person can feel inclined to harden his or her heart against the artist formerly known as Aubrey Graham. He gets a lot of earned credit for his music (and, you know, playing Jimmy Brooks on Degrassi: The Next Generation), but then he also gets an extra heap of it just for being Drizzy. Maybe that’s why the sketches that appealed to Drake’s swooniness directly — the accidentally sexy dad, the bad-boy poet in detention — didn’t pack the same punch as seeing him play Lil Wayne as Steve Urkel or engaging in wizard cosplay. Despite a few misses, it was a great episode and a warm welcome for new cast member Sasheer Zamata.

It looked like we were in for a pretty tepid cold open with “Piers Morgan Live,” but there were a couple of treats inside. After a tame appearance by Chris Christie (Bobby Moynihan), we caught a rare glimpse of the host before the monologue: Drake’s A-Rod is suing “steroids, for being inside of [him]” and his iPhone for autocorrecting his texts to read “My butt = [EMOJI OF A STEROID NEEDLE].” It probably wasn’t an impression he’d been keeping on file (though he did give good duck face) and he seemed to be working out some jitters, but it played. Honestly, though, it’s hard to even remember A-Rod, because Kate McKinnon’s egg-tossing Justin Bieber followed him, and with every fluid shrug and “What did I just say?” silent giggle (“I don’t know, my brain is broken”), she nailed it.

It’s nice to see a cold open venture beyond the stage, like when Drake took us back to his bar mitzvah (again, because for some reason we are fixated on it), an event that, he explains, blended both sides of his family for the first time. This not only allowed for Vanessa Bayer to draw on her expansive experience as Jacob the Bar Mitzvah boy in the role of Drake’s mom, but also for rapid-fire exposition for the uninitiated (grandpa, I told you, he invented YOLO but he’s sorry about it) and a satisfying rap that pulls in Kim Kardashian, Lenny Kravitz (near-rhyme Manischevitz), and the line “I eat nova with Hova / knishes with my bitches.”

Sometimes I just ache to know who wrote a sketch, and wish there were an easy way to find out. If there’s a hard way to find out, don’t tell me. I want an easy way, like an email alert or a watermark. This is the case with “BET’s Hip Hop Classics: Before They Were Stars,” because I want to know who is responsible for mashing up Felicity and Eminem (Taran Killam), and who cast Rick Ross (Kenan Thompson) as a Teletubby (ouch). I like your work, man. Because of Drake’s outlier first career as an underpaid teen drama series star, it seems very appropriate to host an impressions dump with a more interesting construct than we usually get, and it’s so well executed: Hearing Eminem scream into Felicity’s ear that her “INTERNSHIP IS IMPORTANT” and seeing Drake as Weezy fight, and win, against being upstaged by Thompson’s uncannily accurate Reginald VelJohnson, was enough. But we also were treated to the Barbados “reboot” of Blossom (Zamata, giving exactly as many fucks as Rihanna would about being stuck in the vogueing intro), Jay Pharoah’s 2 Chainz terrifying Disney teens, Jay Z (Drake) building a volcano with Mr. Wizard, and a really weird, really wonderful scene from The Wonder Years with Flavor Flav as its narrator.

Let’s just glide on past the Nancy Grace segment that seemed to leave the audience a little cold: Noël Wells played Grace, ever the advocate of the baaaaabies, as the issue of Colorado’s marijuana legalization was tackled. McKinnon showed up as the Walter White of the pot bakery racket, and Drake handed out a pretty good Katt Williams impression (“Nancy, please don’t trip on me, baby”) aided by a green velvet blazer and a wig that begged for petting. “Resolution Revolution,” a pretaped short that doesn’t really get moving until the resolvers (Killam, Pharoah, and Drake) get past their guilty pleasures of sugar, alcohol, and inflatable dolls and get to the real goods: LARPing in capes and hats. The mumbled congratulations between players was my favorite: Hey, dude, “you were resilient.”

Confronting Drake with endless estrogen was probably inevitable, but like I said, “Slumber Party” didn’t do it for me. The girls of SNL, aged 13 and prepped for talking about cute boys with Gatorade-stained pouts, were transformed into women with the majesty of the host’s (Zamata) dad — or at least one girl was, Aidy Bryant. She, we learn, was in a Vicodin coma for years and is actually 25, which may explain why she’s set on fire by the sight of “the realest man [she’s] ever seen,” who delivers snacks and tries to groove to the boom box melodies of the party. The elder slumber partier has a dad who’s “78, and he looks like a hamburger with eyes.” There’s something uncomfortable going on before Bryant humps a floor pillow, but I feel like we should award extra points for conviction, especially on Bryant’s part. It’s not you, girl. It’s the sad, sad coma-horniness thing.

Drake segued into musical guest with “Started From the Bottom” and “Trophies,” lit in red and totally captivating. It’s kind of strange to see these songs performed months after Nothing Was the Same was released, but Drake seems to anticipate that and won’t let your attention slide. Later, when he busts out “Hold On We’re Going Home” (the song that was ruined/reinvented forever by a meme,) he swaps out the red light for a blue one and adds Jhené Aiko to the equation, flirting with her so shamelessly that you fall for it before thinking, Actually, that’s a great way to deal with radio fatigue. Smart or just organic, it doesn’t really matter.

Besides Arianna Huffington’s (Nasim Pedrad) twisty-turny pronunciation of penises (penisiess), the highlight of “Weekend Update” was Bayer as Jacqueline Bisset during her long and winding road to the microphone at the Golden Globes. After her initial descent to the desk proves too, uh, leisurely, the anchors are forced to check in with her later — and when she finally sits down and composes herself, the exit music begins to play. It kind of says something about an event when SNL makes a joke by making it shorter and playing it down.

If you’ve never had the fine privilege of attending “Indiana Jones Epic Stunt Spectacular!,” well, I’m sorry. Sue your parents. Drake is given the honor of playing the emcee at the interactive Disney Raiders of the Lost Ark theme park attraction, which means he’s strapped into a headset and loud polo shirt and made to grapple with an audience member named Rahat (Pedrad), whose limited English causes her to get pummeled with boulders and spill her Tupperware of rice everywhere. While this one wasn’t going to sweep the funny awards, it was certainly a great way to show off Drake’s skills — no cue-card peeking and tons of energy carried him through.

Then it was time to head back to detention with Miss Meadows (Bayer), the poetry teacher with David Brent–style vocal affectations. After a few bons mots from the scholastic poets (Bryant’s “Guess Who’s Ballin?” features the line, “Doritos! / Doritos! / Doritos!” and Thompson’s “Hell Yeah” combines Raven-Symoné’s “before she was gay” with the beautiful themes of pantslessly reclining on water beds), Drake attempts to seduce Miss Meadows with rhymes about mature women (“Chardonnay and calcium chews / Baby I’m falling / You got a new blouse from Chico’s? / Baby that’s ballin”).

The meat of “Mornin’ Miami” is like an apolitical film adaptation of the scrolling text at the end of the “Fox & Friends” segment, and maybe that’s why I like it. The three anchors (McKinnon, Drake, and Moynihan) basically die between the cuts hyping their week’s intros, glumly shifting in their seats and shutting each other up mercilessly whenever anyone tries to speak. “Wet potato contest” and that pesky Jeanne Tripplehorn death rumor (“Jeanne Tripplehorn is back from the dead to tell us how we were wrong, and she was never dead in the first place”) stuck out, but maybe this one is too dear to me to explain why the payoff of learning that B.F. was a nickname for “Burt Fingerblast” is so satisfying. I don’t know! It just rings! I also can’t explain why the appeal of the Beck Bennett/Kyle Mooney video shorts has worn off for me; in the latest installment, they play a pair of friends who can’t get through a conversation without Mooney emerging as the victor because he already knows whatever Bennett is going to say. Mooney slips and dies, leaves his body as a ghost, and chats with Bennett from above as they work out their differences, then returns — at Bennett’s request — to his “cute body,” which is still the body of a know-it-all.

For the most part, the show was great. We were swangin’. And when Drake gave his good night thanks, he congratulated Zamata on her first night and then went right into a fumbling triple-hug. For Drake-hards, it was more of the same lovable Drizzy, but he worked as though the buzz didn’t exist, as though he was still proving what had gotten him from the bottom to here.