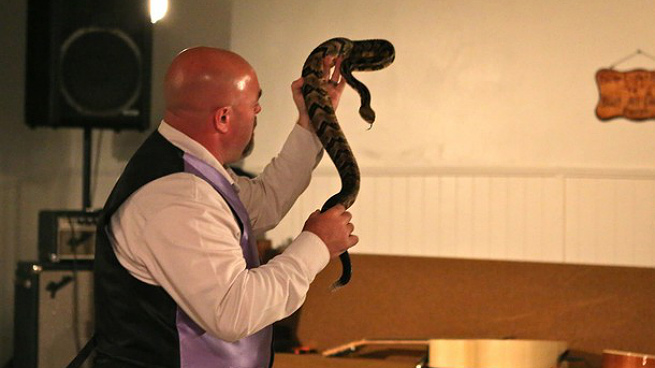 Pastor Jamie Coots, star of National Geographic docureality show Snake Salvation, died over the weekend from a fatal snakebite. Snake Salvation, which began airing toward the ends of last year, followed Coots and fellow Pentecostal pastor Andrew Hamblin as they practiced the tradition known as “snake handling,” a religious ritual native to parts of Appalachia. Pastors handle snakes in tribute to Bible passages that suggest the faithful will be able to “take up serpents” and possess the “power to tread on serpents and scorpions.” National Geographic released a statement on Coots’s death: “We were constantly struck by his devout religious convictions despite the health and legal peril he often faced. Those risks were always worth it to him and his congregants as a means to demonstrate their unwavering faith.”

Snake handling is controversial, dangerous, and sometimes illegal, depending on what state you are in. There are about 40 snake-handling churches in the country, mostly Pentecostal or charismatic. Snake handling is illegal in Alabama, Kentucky, and Tennessee. Because it is potentially illegal, it is generally conducted in home services. The law rarely intervenes unless something goes wrong, but Coots was targeted by a sting operation in 2008 and had 74 snakes seized from his home. The sting operation was instigated because a woman died from being bitten by a rattlesnake in 1995 during a service in Tennessee through Coots’s Full Gospel Tabernacle in Jesus Name.

Snake handling, like speaking in tongues and healing the sick by laying hands on them, is a traditional Pentecostal practice in which entertainment value is part of its effectiveness as a preaching technique. Coots was a third-generation snake handler and had been bitten by snakes eight times before the fatal incident, including one bite that took off part of a finger. He was bitten while doing the service at his church Friday night in Middlesboro, Kentucky, but he managed to finish the service. Paramedics arrived at his house later that night, but Coots refused any form of medical treatment, citing his religious beliefs. He died early Saturday morning in his home.

As a reality show, Snake Salvation was a fascinating glimpse into an underground subculture rooted in an older way of life. The attention brought to the practice by the TV show also put its stars in danger of being prosecuted for their beliefs. The show focused on the day-to-day workings of the church, the family’s snake-capturing adventures, and their dealings with the law. While the National Geographic show shone a light on the secretive religious movement, it could not sugarcoat the hazards of the job. The movement’s founder, George Went Hensley, who introduced snake handling into the Holiness movement around the turn of the twentieth century, also died from a snakebite. To Coots’s family and followers, his willingness to risk his life to handle snakes is a testament to his faith. While there was not a second season planned for Snake Salvation, National Geographic has decided to air a special in tribute to Coots, thanking him, his family, and his congregation for allowing them to film this remnant of the old, weird America.