What about my boy Scott Templeton? Scottie boy! The intrepid Baltimore Sun reporter who conjured maudlin newspaper gold out of thin air — you want a wheelchair-bound kid sitting outside Camden Yards on opening day? Boom! How about fabricated nights under the overpass with Baltimore’s down-and-out population, cowering under the specter of an (also fake) serial killer who targets the homeless? What, you say? Templeton, along with Jimmy McNulty’s season-long manic episode and David Simon’s positively tumescent self-righteous streak, submarined the final season of the best TV show ever made? Well, you know what? You’re wrong, idiot face. I am loud and I am right! Did you even watch The Wire? Yeah, Templeton made up his stories and got caught, but he got the Pulitzer anyway! Can’t you see he won THE GAME? He’s more trill than Stephen Jackson firing his biscuit outside an Indianapolis strip club. Templeton FTW. Can’t believe we left him out our damn Smacket. Smmfh.

Wait a second, I need to read this: 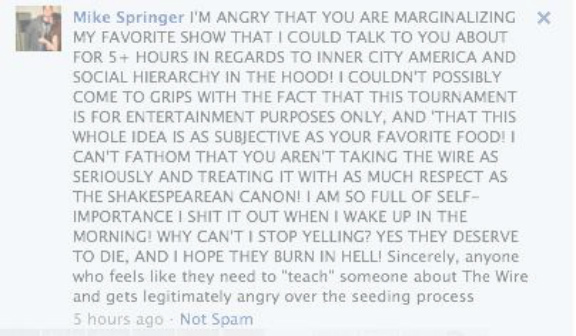 Thanks for the reality check, Springer. Look, people, The Wire is the greatest television show ever made. Serge Malatov and Ziggy Sabotka got thrashed in the voting and in the comments of our first round, but I hate to see even the minor characters go. As we get deeper and deeper into the bracket, the decisions will only get tougher and less fulfilling. In the Round of 16, was anyone happy to see Marlo bow out or Bunny Colvin banished back to quiet retirement on his porch? The hell with it — we lost eight characters yesterday, and I want to take a moment to remember the remaining six of them. Lester Freamon just didn’t want it enough to upset Stringer — Cool Lester Smooth has got his tiny armoire side business and a lovely reformed stripper waiting on him at home. He’s no Hungry Man, and even Hungry Man fell in line behind String. Carcetti, you smug, womanizing prick, I already miss your Slick Willie ass. Bubbles, you could’ve bought my vote for a red fedora anyday, and Wallace, I don’t care how good you are in Friday Night Lights and Chronicle — you’re still Wallace. Snoop, there’s no shame in letting Michael get the drop on you, and you know you still look good, girl. And Cutty, man, we all know that if you still had it in you, you’d beat Omar’s skinny ass, and it’s because you lost that edge that we love you.

Looking ahead to the Wire Elite Eight, the hard choices only get harder. In Omar and Michael, we’ve got a duo of stick-up kids. How do you like yours — O.G. or New School? Charismatic or stoic? Omar’s “Indeed” or Michael’s cold eyes? Bunk will likely get his first serious test from Jimmy McNulty. Yes, it’s partner versus partner, and only one makes the Final Four. Don’t be surprised if the lovable Bunk gets bounced by the closest thing the Wire has to a main character. That’s what’s great about the Bunk, though. He could give two shits about your bracket. He’ll tie one on tonight, chew on his cigar, puke in a wastebasket tomorrow morning, and go back to being natural police. It’s Westside versus East in Avon and Prop Joe, Barksdale’s towers versus Joe’s superior, Greek-sourced product. Expect Joe to arrive overdressed and ready to defend himself with wit: “Look the part, be the part, motherfucker.” But Avon’s got no flex to him — he’s just a gangster, I suppose — so Joe might as well just close his eyes and breathe easy. Finally, we got Bodie Broadus, Adebisi’s bitch from Oz, trying to pull off a major upset against Stringer Bell. With all his heart, Bodie will be a sentimental favorite, but even if he’s one smart-ass pawn, he’ll need to be damn lucky to make the Final Four over String.

Tomorrow’s results are gonna be worse than today’s. We’ll be losing four characters who I feel like I know and maybe even like better than some of my friends. But as a certain Acting Commissioner who never even made it into the bracket said: “This is Baltimore, gentlemen. The gods will not save you.” 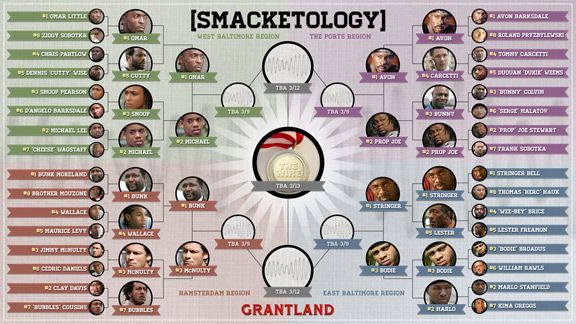