Here are two tips, one for you and one for Hollywood:

1. Sometimes, an uneven television show is worth sticking with.

2. Comic-book shows should be fun.

Both apply in the case of the CW’s Arrow, which just had its Season 3 premiere Wednesday night. It’s a show I was in on, then regrettably out on, and am now back on board with. Arrow is also something of an object lesson for similarly themed comic-book action IPs like Gotham (or Agents of S.H.I.E.L.D., or even The Strain). If a creative team is clear-eyed about what’s not working and nimble enough to focus on what is, a borderline bad and worryingly cheesy show can become a really entertaining one.

Arrow is an adaption of DC Comics’ Green Arrow, which is the nom de tights of its hero, one Oliver Queen, a billionaire playboy turned left-wing bleeding-heart/social-justice vigilante. In the comics, Green Arrow’s signature run of stories actually happened in another character’s title. Starting with 1970’s Green Lantern no. 76, comics legend Dennis O’Neil (with pencils by Neal Adams) paired the titular space cop with the earthbound and streetwise Queen, in an attempt to reverse Green Lantern’s slumping sales and stave off cancellation. The series was rebranded Green Lantern Co-Starring Green Arrow or, as it’s more commonly known, Green Lantern/Green Arrow.

Green Lantern/Green Arrow was revolutionary. Most superhero books of the day mainly featured stories about caped-up and masked heroes punching criminals in the face. By teaming the galactic law-enforcer Green Lantern with the liberal Queen, GL/GA sought to explore the socioeconomic forces — poverty, racism, unchecked greed — at the root of crime. It was an inspired pairing, essentially interstellar William F. Buckley and vigilante Noam Chomsky.

In the opening pages of issue no. 76, Green Lantern “saves” a fat-cat slumlord from being pelted by garbage on the street in front of one of his properties. As Lantern is subduing one of the man’s attackers, Green Arrow shows up to explain that the slumlord was being littered on because he’s getting ready to kick his tenants out, in order to raze the building for a parking lot. Godwin’s Law was broken by page 5 of the issue, quickly followed by a #NotAllGreenLanterns moment on page 6. 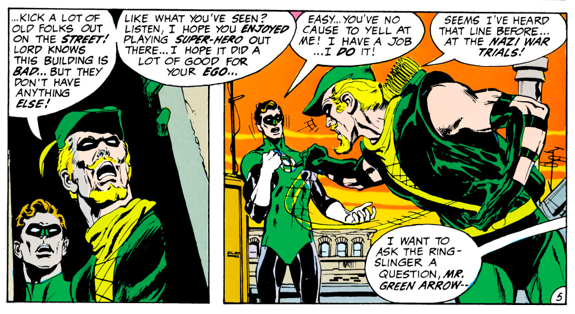 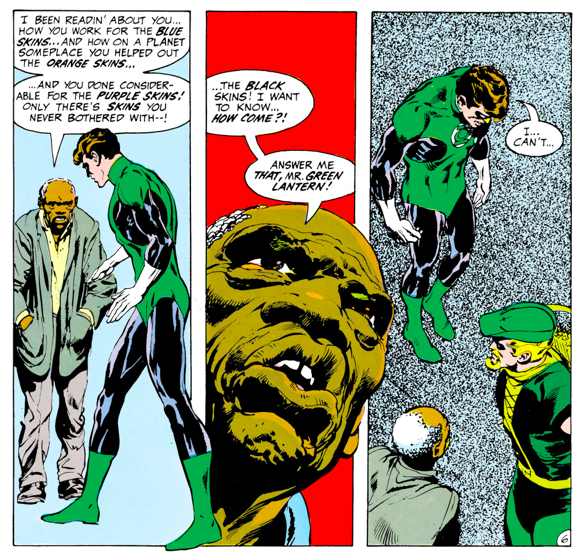 Pretty amazing stuff, right? Makes Batman’s methods seem fascistic. Later issues tackled drug addiction, the environment, social conformity, the justice system, politics, and overpopulation. The series explored these weighty topics with varying degrees of competence, but that shouldn’t diminish how ambitious the attempt was. At that time, comics weren’t anywhere near as culturally accepted as a medium as they are now.

With that history in mind, I was pretty keen to check out Arrow. I did so, binge-style, last summer, after the first season had aired. It was disappointing. The dialogue was frequently trope-heavy. (During one episode, Detective Quentin Lance, essentially Arrow’s Jim Gordon, screams, “I need an ambulance — NOW!” into his walkie-talkie, as if anyone calls ambulances for later on.)

The cast was too attractive — distractingly so. Seriously, Starling City, Arrow’s fictional setting, had the world’s hottest police department and DA’s office. Oliver (played by Stephen Amell) seemed to have more “will they or won’t they?” chemistry with his sister Thea than with his ex-girlfriend and Season 1 love interest Laurel. Additionally, some of the actors were just plain not good. As a result, the soap-opera-style story lines made it feel like you were actually watching a soap opera. The show’s tone was muddled, trying to tell the story of a dude who runs around literally dressed like fucking Robin Hood with Christopher Nolan–style grit and realism.

After about 12 episodes, I was out.

Bad dialogue, bad casting; these are things that television shows do not usually come back from. That being said, there were also things the show did well, even from the start. Amell was and is great, and appropriately chiseled as Oliver Queen. The show used flashbacks to show how Oliver, trapped for five years on a mysterious Pacific island, went from callow, fair-haired, born-on-third rich boy to the weary, humane, ass-kicking ninja he was in Starling City. The action scenes — gunfights, hand-to-hand combat, and copious archery — were solid, as good as anything you’d see on network television.

Midway through Season 2, I started to hear that the show had gotten better and had hit an unforeseen gear. That feedback, combined with an appearance by DC deep-cut faves the Suicide Squad (like the comics version of the Dirty Dozen, but slightly more depraved), intrigued me enough to jump back in.

There is still the occasional clunky line, and the cast is by and large the same as it was, but I found something surprising: The show had become really entertaining.

Poor chemistry was allayed by giving the offending parties fewer scenes together. Soap-opera elements were recalibrated and romantic arcs carefully shelved. Compelling characters had their parts beefed up and backstories fleshed out. The character of computer expert Felicity Smoak, originally planned as a glorified comics-nerd Easter egg, was played with such Aaron Sorkin–babble alacrity by Emily Bett Rickards that the showrunners called an audible and turned her into a core character.

Oliver’s stalwart bodyguard Diggle, played by David Ramsey, perhaps the best actor on the entire show, became the focus of several episodes, including the aforementioned Suicide Squad outing. The action scenes, always a strength for the series, have only gotten stronger. And the tone is unapologetic, embracing its comic-book roots.

Watching Fox’s Gotham, another DC property about a crime-ridden city that will one day be home to another maladjusted crime-fighting billionaire weirdo,1 is a lot like watching Arrow during that uneven first season. Gotham just hasn’t figured it out yet. Which isn’t the same as saying it won’t.

This one with a rubber fetish and repressed S&M tendencies.

The way each show handles its Easter eggs highlights the differences between Arrow and Gotham. Gotham seems insecure about its audience, and really, really, really wants to make sure viewers don’t miss the clues. Multiple ancillary characters note Oswald Cobblepot’s loping, egg-rolling-down-a-hill gait and — while practically winking at the camera — quip that he walks “like a penguin!” Selina Kyle tells everyone to “call me Cat.” Edward Nygma can’t stop mentioning riddles. YOU KNOW, BATMAN STUFF.

Arrow is packed to the gills with Easter eggs, but there’s never a wink; either you get it or you don’t. Batman villain Harley Quinn pops up in the Suicide Squad episode, as a tangle of bleached hair and a Brooklynese bleat emanating from inside a prison cell, but no one remarks on it. It’s just a moment that passes. Gotham would’ve handled it by having Jim Gordon shout, “Hey, that’s Harley Quinn!”

Tonally, Gotham, quite logically, is going for the gritty — and objectively lucrative! — landscape of Frank Miller and Christopher Nolan. Which is a fine idea, as long as your protagonist isn’t doing stuff like spilling important details about an active double homicide to a child, or handcuffing a teenage Selina Kyle to a railing in an alley (literally called “Crime Alley”) in America’s most dangerous city while he goes down into the sewer.

Gritty realism has a different belief-suspension mechanic from comic-book action. It’s pretty hard to be a gritty crime drama when you have a killer murdering people with balloons and going by the name “the Balloonman,” which results in Gordon saying to the commissioner, “There’s at least two more balloons out there,” super-seriously, because, you know, murder.

But then again, maybe all Gotham needs, like Arrow did, is time.