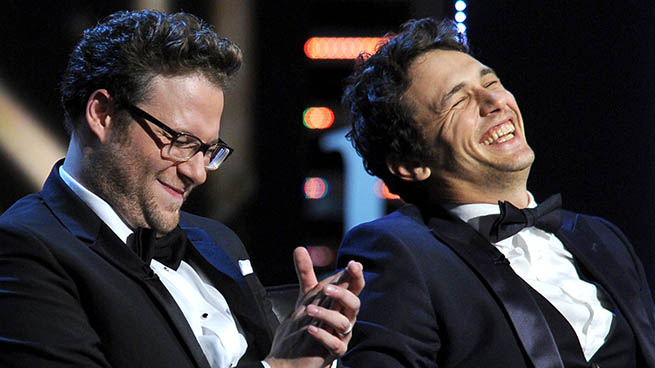 Good news! If you saw Pineapple Express in theaters, you’re legally entitled to a refund, because you got DUPED. Quizzed on Watch What Happens Live about high-profile pals he has and hasn’t smoked marijuana with, Seth Rogen revealed that Paul Rudd’s a yes (“lots of times”), Sarah Silverman’s a yes (“many times”), Jonah Hill and Snoop Dogg are yeses, but James Franco is a no — because he doesn’t indulge in that kind of super-artist-destroying behavior. (Franco did tell Rolling Stone last summer that he hasn’t smoked “in decades,” but, still … that refund. Please.)

With Tha Carter V (allegedly) drawing near, Lil Wayne is re-upping on the threat/promise to make it his last record: “I personally plan on this being my final solo album, yes, and it’s definitely the final Carter album.” Except: “25 to 35 million would get me to do another solo album after this.”

Nickelodeon is going to do a Kids’ Choice Sports Awards now, too.

Lena Dunham: “I don’t know if I’m going to want to act anymore. I’m always relieved on the days I don’t have to. I’d rather give parts to other women than be the woman having the parts.”

This is Tame Impala covering Michael Jackson. [via]

CBS renewed 18 shows in one fell swoop. Among them: NCIS, Person of Interest, CSI, Hawaii Five-0, Elementary, The Good Wife, 2 Broke Girls, The Millers, Mike & Molly, Mom, Two and a Half Men, and The Amazing Race. No word on The Mentalist, The Crazy Ones, or Intelligence yet.

Seth Grahame-Smith, who wrote Abraham Lincoln: Vampire Hunter (both the original novel and the screenplay), is directing a remake of Ray Bradbury’s Something Wicked This Way Comes.