“Archaeology is the search for fact … not truth.”
— Indiana Jones

The late Jeffrey Boam is the sole credited screenwriter of Indiana Jones and the Last Crusade. Boam was one of those talented, can-do-anything ’80s Hollywood script stars — his credits include The Lost Boys, Innerspace, Funny Farm, and, no stranger to sequels, Lethal Weapon(s) II and III. But he didn’t really write the third installment in the Indy franchise. “Tom [Stoppard] is pretty much responsible for every line of dialogue,” Steven Spielberg said in 2009. Stoppard is arguably the world’s greatest living playwright, so it’s no surprise that he gifted Indy with a mind-gem like the above. It’s a useful mantra for Sequeltology. This is math, not an emotional guidepost to your heart. It’s a daily, tabulated, categorical, ruthless manifestation of What’s Fact Now. And the fact is, you guys hate Rocky Balboa. 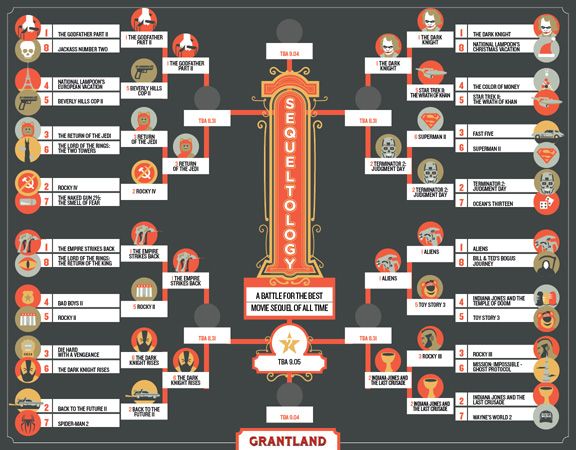 Sylvester Stallone’s pugnacious Philly fighter is the most iconic sports movie figure ever, and yet he never stood a chance yesterday. Pitted against a George Lucas–imagined troika of terrors, Rock took jabs, body blows, and, in the case of Rocky II, a quaking right hook that no one could get up from. Both Star Wars entries coasted past Sly’s shy guy, but it’s what Crusade, the Sean Connery–laced return to form for the action-adventure franchise, did that shocked most of us at Grantland. More than 10 years ago, your Fearless Leader wrote, “I always thought Rocky III was the most polished of all the Rockys, with the best storyline, the best performances, the best villain (a transcendent performance from Mr. T), the best theme (Survivor’s “Eye of the Tiger”) and three stunning plot twists (Mickey dying, Rocky getting knocked out, and Apollo surfacing out of nowhere to train Rocky for the rematch).” So what happened to this series in the minds of Facebook-using Americans? Is Rocky dead in your hearts and minds?

It’s hard to say how something this venerable, this likable, this replayed on TNT ad infinitum could be so diminished in the public consciousness. If there is a place where a Rocky movie should kick ass in a poll, this is probably that place. Alas, it’s all bats, aliens, future robots, and Machiavellian crime syndicate patriarchs from here on out. And with the exception of sixth-seeded The Dark Knight Rises, there’s a lot of chalk on our board. Only Toy Story 3 put a scare into one of the four no. 1 seeds — a giant mother xenomorph nearly had her birthing tube detached by Buzz Lightyear’s laser cannon. There are a few explanations for that near-upset — recency, Randy Newman, this scene tearing your soul into a million pieces, Pixar’s unimpeachable genius! (Grantland™ is a registered trademark of The Walt Disney Company) — but I’m going to go with Tim Allen. Never underestimate Tim Allen.

The dominance of the top seeds is not such a bad thing, really. There are few arguments reasonable people can make against, say, a T-800 riding around on a chopper while saving mankind’s one true hope from a liquid-metal killing machine. But the lesson is clear: This bracket is not a quest for truth. The truth is that Tom Stoppard wrote a movie. The fact is that Jeffrey Boam wrote a movie. You want the truth? Look inside yourselves. Or vote for today’s Elite 8. Your call.