Ah, Frank the Driver. It’s been 13 years since The Transporter, and I’m still not over him. I remember our meeting like it was yesterday. I remember us. He was balding and stubbled and gymnastically muscled. In the climax of The Transporter, he took out dozens of goons with only his legs. On an oil slick. With no shirt, because his shirt was a weapon, too. And me? I was … I was … Well, at first, I was all, This man can’t act — he’s like a charley horse with a driver’s license. Then I saw him beat up one human trafficker (or enabler of human trafficking) after another, and thought, Acting. Then I made that air sound that in Teenage Girl means, Whatever. It totally doesn’t matter. Watching him in motion was like watching Gene Kelly stomp a puddle or hug a street lamp.

The one-man-wrecking-crew movie was toast back then. But he was making a croque monsieur. Technically, Luc Besson was cooking it — he wrote and produced, and Louis Leterrier and Corey Yuen directed. Now he’s making the same dish with a different Frank, and compared to the original — the only Frank — he’s stale bread. I’d never seen Ed Skrein until the other night — apparently, he has a couple of rap albums. But Besson seems eager to restart this series, which ended after three increasingly less awesome installments. Transporter Refueled all but skywrites “Jason who?” with a witch on a broom. Skrein is tall and svelte. When he speaks you don’t know whether he’s spinning records at 1 a.m. or starring in an action movie.

The plot is still funnish, but with a bigger-than-usual dose of Besson’s notional feminism. A quartet of rogue prostitutes — Loan Chabanol, Gabriella Wright, Tatiana Pajkovic, and Wenxia Yu — hire Frank to drive his Audi (still an egregiously placed product) for the heist they’re pulling on their ex-boss (Radivoje Bukvic), an Eastern European dirtbag who assumes control of sex work on part of the French Riviera by mowing down the black dudes and the black women they pimp. It’s rat-a-tat-tat, and a van door opens and out pour skinny, scared-looking young white women. He keeps for himself the lightest-skinned young woman of the previous operation. As an adult (Noémie Lenoir, model), that woman becomes his sex toy and sidekick, and can be counted on to look great, suppress her ethnicity, and ask ridiculous questions. Here’s one: “Do you think the West Africans from ’95 are back in the skin game?” Honey, you’re dancing for the man who murdered them!

With almost anybody else’s movies, you’d be appalled. But Besson has perfected pretending to be stupid. You put up with his shenanigans — Camille Delamarre (Transporter 3, Brick Mansions) directs them once more — because his is a moral universe in which almost everybody’s a different flavor of bad. Speaking of which, it appears Besson knows that Skrein might be no one’s cup of tea; he’s just a cup but with the water and bag and sugar cube on the side. So he’s given this new Frank a charismatic, actorly sidekick: his father, Frank Sr., who’s played by the Irishman Ray Stevenson. Dad’s a newly retired spy who seems to welcome being part of this caper, since it lets him fake being a pilot and lands him in bed with two of the girls. The only way to explain how a man this exuberant produced a son this dull would be if the mother were a sack of flour.

There aren’t enough showpiece numbers for Skrein, at least not of the quality that Jason Statham has had. This Frank does somehow fly feetfirst from a Jet Ski into an SUV, but that’s basically the leap-through-the-transom move from previous Besson productions. Delamarre and the stunt team come up with some perfectly impossible action sequences, like when Frank has to get the Audi beneath a runaway jet whose interior looks like a private plane but whose exterior seems very Airbus. With Riviera police in pursuit, he manages to drive that Audi, scot-free, through a busy airport. It’s hard to say whether this movie is a greater indictment of female exploitation or of French security.

As ready as we should be for a tale of sex workers in revolt, watching these four burn up apartments and steal fingerprints and make out with each other in discos, not to mention hack computers and poison bad guys and flee the scenes of crimes in blonde wigs and gas masks, is like the Robert Palmer girls making an Ocean’s movie for Cartier. (Or maybe it’s just that Taylor Swift’s Besson-meets–Hong Kong video for “Bad Blood” with less accidental comedy.) And who’s this movie even for? If what’s onscreen is any indication, the ideal audience won’t even be at the theater this weekend. They’ll be busy being sex slaves. 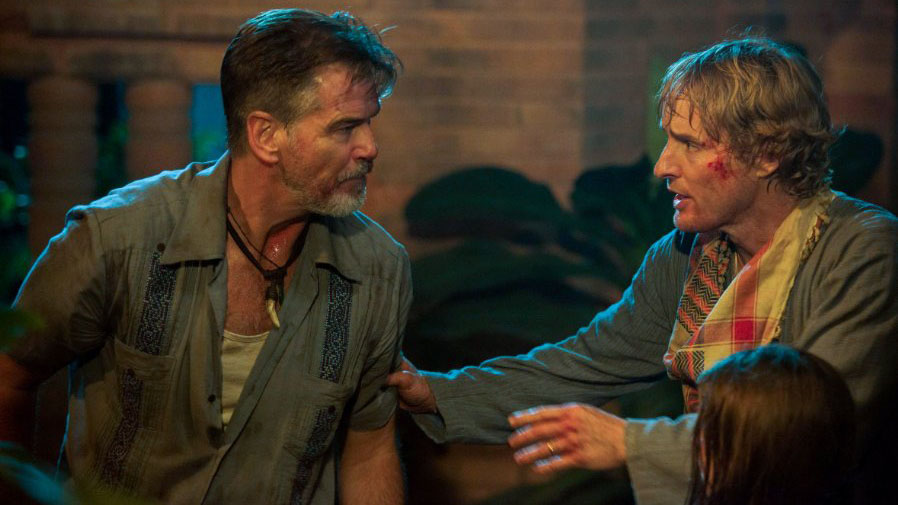 One of my favorite things to do at the Cannes Film Festival is wander around and see the ads for movies pursuing money or distribution. They rarely look good and are always a surprise. Like, who had the idea to put Bruce Willis, Josh Duhamel, and Rosario Dawson in the same firefighter movie and then call that movie Fire With Fire? Cannes is raining movies just like that; movies like Transporter Refueled and No Escape. I’m not saying these films were necessarily shopped there (even if Refueled is actually set in and around Cannes!), but they’ve got that Cannes hotel-room-deal, straight-to-streaming flavor. Except they’re at the megaplex right now.

No Escape is bare-bones, shameless, and too obnoxious to stay suspenseful for long. If you saw this movie when it opened last weekend, it’s because you saw that clip of Owen Wilson heaving a little girl from a roof. That’s why I went. He has to do it twice. This is another one of those bad-things-happen-to-white-people-on-vacation-someplace-brown movies. The previous edition was 2012’s The Impossible, in which a tsunami destroys Thailand but all the camera cares about is Naomi Watts and Ewan McGregor and the actors playing their kids. These movies always have misleading titles, too. We Thought We Were Going to Die But We Didn’t Because We’re White would be far more accurate.

This time, Wilson’s character, Jack, takes his wife, Annie (Lake Bell), and two daughters, Lucy (Sterling Jerins) and Beeze (Claire Geare), to some Southeast Asian country, where he’s about to start doing some engineering work. It looks like Thailand, but, given the geographical miracle that ends the movie, should be Laos or Cambodia. They’ve arrived at their hotel just in time for a xenophobic coup. Hundreds of machete-wielding madmen sack the hotel and kill everybody they can. “I’m an American,” screams an American before he’s shot in the head to huge cheers. Jack sees this and knows he’s got to high-tail it to the American embassy.

The movie fails to cough up one local worthy of even a decent close-up. When the ideology of the rebel psychos is translated to English, we learn that it’s Jack’s company that’s got them all riled up. Some of them are carrying a banner that has his face on it. But all he has to say about that is, “I thought we were the good guys!” Case closed. It’s off to fleeing tank blasts and using the corpse of an Asian male to shield them when the lunatics start combing the blast site, looking to slay survivors. Jack kills one of them. Annie kills another. They all cover their faces with scarves and hats to blend in while heading in the opposite direction of a rebel street celebration.

Director John Erick Dowdle made last summer’s so-so found-footage spelunking horror film As Above, So Below. He shares screenwriting credit with his brother Drew here, and this new movie is really just another sort of horror. Things are intermittently harrowing. Pierce Brosnan’s sexy English fighter (who was also at Jack’s hotel) arrives for day-saving and comic relief. When Wilson points out some blood on Brosnan’s head or clothes, he says, dashingly, “That’s not mine.” This grizzled, superficial, off-Connery version of Brosnan should be the only one the movies have. He’s far better than he needs to be. So is Wilson. Seeing him lose his shit is something new. And Bell goes for emotional calm in the early scenes, but then can’t seem to tell how seriously to take the climbing and running and the pretending, in an emergency, to be Southeast Asian. But in this movie, that kind of uncertainty registers as cavalier. After what should be a devastating emotional climax between the family and the rebels, Owen asks everybody, “Where’s the Beeze?” as if he’s back making romantic comedies with Kate Hudson and Matt Dillon.

They’ve called this thing No Escape, but escape is all it is: relentless defiance of physics, death, and propriety. There’s a pornographic, anti-traumatic aspect to survival in these movies, with all the slow motion and fearless determination and mortal taunting. “If we die here tomorrow, it would have been worth it,” says Annie to Jack. But that’s just it, lady. In the movies, you never have to.