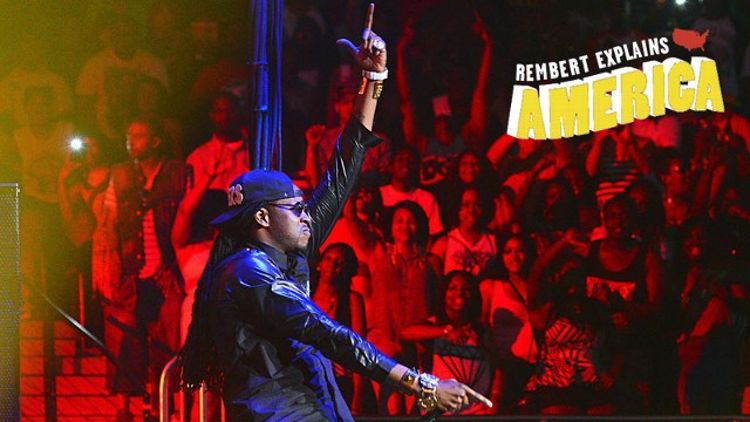 Ain’t nothin’ like Atlanta. You don’t know what the fuck you gonna get. This is the most nastiest, dirtiest, ugliest, most beautiful, wonderful place in all of America.

It sounds silly to admit, but I actually well up with pride when, driving in another state, I see signs directing travelers to my city.

Like the “let me just push through Alabama and Mississippi” light at the end of the Southern tolerance tunnel that it may or may not still be, to me it’s simply home, the greatest imperfect place I know.

It’s the same subtle pride I feel whenever one of my sports teams is featured on television, a rapper mentions a local reference in a song, someone texts me that they’re passing through the Hartsfield-Jackson airport, or even when I see my city’s name bolded and in a larger font than other cities around it on a map. It comes and goes, but for a split second it couldn’t be realer.

These were the emotions I welcomed as I neared the end of a six-hour drive from Memphis to Atlanta. Rarely had I needed to rush somewhere on this trip, but time was of the essence this Saturday afternoon.

When it comes to radio stations hosting concerts, especially within the hip-hop sphere, most know of the supreme example: New York’s Hot 97 and Summer Jam. Though the rise of the festival culture (and the decline of radio’s influence on music) has lessened the cultural significance of the event, it’s still something people care about. NPR’s Frannie Kelley discussed the event and its 20th-anniversary edition, held earlier this month:

Summer Jam is useful because, between the talent and the audience, it’s a snapshot of hip-hop right now.

If anything, it’s a barometer. A chance to check the temperature, look back on the past year, perhaps catch up on things bubbling under the surface, and prepare yourself for what’s to come.

Knowing that, as a past attendee of Summer Jam, this was part of my excitement for the Atlanta equivalent, Hot 107.9’s 18th Annual Birthday Bash. Who, exactly, was Rich Homie Quan? Would the people of Atlanta care about 2 Chainz now that he’s bigger than Atlanta? Will the Migos be there?

These were my Atlanta music questions, but my desires were purely selfish, a bouillabaisse of missing my city and its nasty, dirty, ugly, wonderful, beautiful antics; wanting to surround myself with tens of thousands of black people that I sorely needed to see after a weeklong tour of the rural East Coast; and finally attending an event that I’d spent my entire adolescence wanting to attend.

Plainly, this wasn’t an event a 26-year-old native should be dying to go to. At this point, I was supposed to be over Birthday Bash. My Birthday Bash heyday should have been ages 15 to 18. But it wasn’t.

My story is common. The kids I grew up with were definitely going to Birthday Bash every year. My friends from school: not so much. It’s a story of black and white, South and North, public and private. This is sometimes referred to as “growing up in a segregated city.” For me, much of growing up was straddling both worlds. Unfortunately, Birthday Bash was a failure of pulling it off.

Some eight years after leaving the city, however, I was back and finally ready to check it off my list. It was embarrassing, and I was ready to feel like “the old man at the club,” but I didn’t care.

En route to Atlanta’s Philips Arena, I thought about my first trip to Summer Jam. Outside, I was expecting people without tickets to be as entertaining as the ticket-holding contingent inside. I was not wrong.

The quarter-mile walk from parking lot to entry included street teams, mixtape handouts, one really good freestyle, perhaps a third of the downtown police force, and men and women alike dressed to impress and/or depress, depending on your definition of “beautiful.” The “Jack Boyz” were there, a group of guys that had shirts that said “Jack Boyz,” as were Migos fans (easy to spot with their Migos shirts) and, of course, @kid_cash96, easy to spot out because he’s some guy in a shirt with @kid_cash96 written on the back.

It was a level of self-promotion and advertising that would even bring Money Mutual Montel Williams to his knees.

I loved it. But not in the condescending way people unfamiliar with the event like this describe it, like they’re watching an episode of the Discovery Channel. I loved it because no one cared. Everyone was here because it was the place to be. And spirits were high.

By the time my friend Michael and I walked in, it was 8:30. Yes, we were 150 minutes late. He, like me, was someone who should have been to many a Birthday Bash, but had never gone. So we just sat in the atrium of the arena, in no rush to get to our seats, downing a few hot dogs and taking it all in.

After a few minutes, we walked to our seats.

Our timing was perfect. We’d missed full sets by Trinidad James and French Montana and arrived for the Hustle Gang showcase, which would be followed by headliner 2 Chainz and any other surprise guests that were slated.

While we waited, however, the resident DJ pulled a move that really played to the strength of a crowd, and in turn, a city. In this instance, the DJ plays a track and the entire audience is expected to sing or rap along. This was perhaps most famously portrayed in Fade to Black as the crowd recited “Mo Money, Mo Problems” word for word. When done properly, this act often eclipses the actual performances.

In a show of the crowd’s regionalism, the two finest examples of this were DG Yola’s “Ain’t Gon’ Let Up” and Pastor Troy’s “Vice Versa.” These two songs, though not widely known beyond the city, incite powerful, emotional reactions from those who love them. And that’s only amplified when tens of thousands of people are reacting at the same time.

After the medley, an unremarkable B.o.B. set came and nearly went, before a legend hit the stage.

On paper, Dro is not a remarkable artist. But he is one of those guys who comes around and is so undeniably from a place (drawl, content matter, references), he’s almost irrationally embraced to the point of mania, à la Cam’ron in Harlem.

Out of the mainstream spotlight since his 2006 hit “Shoulder Lean,” he’s in the midst of a comeback with a track titled, for the censors, “FDB.” When Dro walked out on that stage, however, in an all-white suit, it was as if he’d never left. The applause and shouts were lengthy and loud.

The crowd seemed to respect that he was back. And that he’s maintained his high, “no off days” standards for formalwear.

It hasn’t seemed to matter, in Atlanta, how T.I.’s recent albums have fared. Something has allowed for him to keep hip-hop pole position for almost a decade. His only real downtime occurred while he was incarcerated. If T.I. is free, he’s on top in Atlanta.

I later learned that T.I. was contractually forbidden from performing a full set at Birthday Bash due to his tour with Lil Wayne. But he doesn’t even really need to perform to receive deafeningly positive feedback. He just needs to shout out where he’s from, make some bold declarations about his status as king, maybe do a hook, and then he’s out.

At the end of it all, after the Hustle Gang artists were finished performing, T.I. had just one more thing to say:

And just like that, Birthday Bash belongs to me. Nigga.

And then he walked off. Easily the loudest cheer of the night.

This was amazing. Birthday Bash was fantastic. Everyone was acting perfect. And then I looked over to the left:

Yes, that was a guy waving a wad of money around while his neighbor, an older gentleman, held his head in his hands.

Of course it’s socially irresponsible. And, most likely, that’s all the money in his account. And, by the end of the night, he’s easily getting jumped for 80-90 percent of that cash.

BUT IT’S BIRTHDAY BASH. I GET IT.

Scanning the crowd and feeling the energy in Philips Arena as two lifelong Hawks fans, my friend and I could only speculate what a game would be like with this type of crowd.

Or simply with people standing up. That alone would be a revelation.

In preparation for the main event, 2 Chainz, the crowd again carried the burden of rapping along to whatever the DJ played. We did not disappoint. Around this time, I realized my note-taking was almost nonexistent and I’d fully slipped into high school house-party mode.

And I didn’t fight it.

There’s a beauty to forgetting you have a job to do. At this point, I just hoped to remember as much as I could, because there was simply too much fun and nostalgia swirling through the space.

2 Chainz was the perfect headliner for a cameo-heavy show, because in 2012, he did songs with all of us. Every single one of us.

What happened, however, was an emotional roller coaster of a set.

When you see 2 Chainz onstage and hear “Beez in the Trap,” you’re waiting for the moment that Nicki Minaj walks out. But she never did.

When you see 2 Chainz onstage and hear “Bands a Make Her Dance,” you’re waiting for the moment that Juicy J walks out. But he never did.

When you see 2 Chainz onstage and hear “Spend It,” you’re waiting for the moment that T.I. walks back out. But he never did.

And when you see 2 Chainz as Tity Boi onstage and hear “Duffle Bag Boy,” you’re most certainly waiting for the moment Lil Wayne comes out and sings that Magnolia Projects yodel of a hook. But he never did.

I had never been disappointed with a 2 Chainz performance. But, time and time again, you could feel the crowd swell up with excitement and then become deflated when he finished a track, sans guest, and simply yelled “TRUUUU.”

And then the music to the Drake-assisted “No Lie” began. At this point, I was sure he’d have no guest —

He came dressed like a bar mitzvah crasher and I loved every minute of it. Despite the string of false starts, 2 Chainz successfully headlined Birthday Bash by bringing out Mr. Dada Supreme himself. It was a great moment. That, and the three minutes of glitter that capped his set:

As Mr. Chainz wrapped it up and the crowd began to exit to the sound of the 107.9 DJs thanking a list of sponsors and telling out-of-towners where to party, I gave my friend Michael a hug. This was a great day for us grown-ish men.

What Birthday Bash represents is a slice of Atlanta that was once a larger piece of the city’s pie. But Atlanta is changing, mostly for the good of the city. With that said, though, I’m glad this slice still exists and that, for the first time in a while, I got a taste.