“Reddit, help me find some peace in dying young (I’m 23),” began the post by Kim Suozzi on the r/atheism board on August 17, 2012, under the username “pizzarules1000.” Suozzi had been posting about her illness, a form of brain cancer called glioblastoma multiforme, for a few months (in addition to posting adorable pictures of her cat to r/aww). “Today is my 23rd birthday and probably my last. Anything awesome I should try before I die?” she wrote on AskReddit. A fairly recent college graduate who had studied neuroscience, Suozzi posted MRI scans and pictures of herself to prove she was not a scam artist or a liar, and she asked for recommendations of Boston-area activities she should try. Redditors suggested playing with puppies at an animal shelter, skydiving, rock climbing, making art, eating a cheeseburger on a doughnut bun, doing volunteer work, seeing the Blue Man Group on mushrooms (“pretty magical”), and surfing, among other things. People offered Suozzi the use of their homes and to show her around their cities, should she find a way to visit them. One person offered to get her “super duper high.”

Suozzi posted a video blog about her situation and canvassed Redditors for help fulfilling her dream of being cryonically preserved. “My prognosis looks pretty bleak at this point,” she wrote, “and though I am hoping to exceed the 6-10 month median survival, I have to prepare to die.” Suozzi’s interest in futurism was sparked by reading Ray Kurzweil’s The Age of Spiritual Machines in a cognitive science class at Truman State, which prompted her to also read Kurzweil’s The Singularity Is Near. Kurzweil’s books, beginning with his influential tome The Age of Intelligent Machines, forecast “the Singularity,” a hypothetical future event when artificial intelligence will surpass human intelligence. Kurzweil predicts 2045 as a soft date for that happening. Kurzweil is currently a director of engineering at Google.

Silicon Valley has become a hotbed for futurology, with adherents ranging from Elon Musk, whose company SpaceX has the long-term goal of colonizing Mars, to the founders of the nutrition substitute Soylent, whose winky slogan is “Free Your Body.”1 “Futurology” is an umbrella term that encompasses the beliefs of both kooky conspiratorial types with hilariously janky web domains and actual geniuses like world-renowned theoretical physicist Michio Kaku. Futurists share a common belief that the bleeding edge of science exists in a zone that might seem crackpot now but will prove prophetic later. Believers refer to such successes as splitting the atom as proof that all big scientific leaps were once considered impossible science fiction. Some credit sci-fi author H.G. Wells with founding the discipline because of his turn-of-the-20th-century predictions about the year 2000, some of which even came true. Futurology lumps together a wide array of disciplines, many of them related to the idea of transhumanism — the process by which humans will be integrated with AI through nanotechnology, cybernetic implants, and thought-controlled robotics. Some of the fields are in primitive stages, while others are moving along at a surprisingly rapid pace. The desire to overcome one’s meatbody and be uploaded into a permanent robotic avatar is part of transhumanism; “Free Your Body” could be the slogan. Merging with the machines seems a little like a Revenge of the Nerds fantasy about defeating the jocks by getting your superior intellect uploaded into a sweet new mecha. But not all futurology is optimistic — some predictions are for disaster. The hope of extending life is a central tenet, though.

From taking pleasure in food?

In a sense, life extension is like a nonbeliever’s version of heaven, an atheist’s dream of eternal life facilitated by scientific innovation. To the faithful, death is just another disease that will eventually be overcome by the power of science and the intellectual capacity of the human mind. Many cryopreserved patients passed away from fatal diseases that they hope science will eventually find cures for. Cryonics is supposed to allow all of us who happened to be born too early for the eradication of all diseases, including death, to wait for a cure while being preserved in giant Dewar vacuum flasks.

There are debates about what is actually preserved by the cryonic vitrification process, which no longer involves freezing but rather a glass transition. Human corpses are placed in giant containers that are topped off with liquid nitrogen, transforming fluids inside the body into a gel-like state. The original freezing process involved producing ice crystals in the body, a problem the vitrification process avoids. But how well cryopreservation actually preserves vital cell structures, particularly in the brain, is a matter of debate.

Right now, cryonics is mostly an idea — and not only because no one has ever successfully been rejuvenated. It’s relatively new. Robert Ettinger, the “father of cryonics,” conceptualized the process in the early ’60s. He died in 2011 and remains cryopreserved at Michigan’s Cryonics Institute, with the bodies of his first and second wives.2 He cofounded the Immortalist Society, a charitable organization dedicated to life extension, in 1967. The field’s growth spiked in the early ’60s but slowed until the late ’80s, when it was rediscovered and championed by a new generation of burgeoning techno-futurists.

Ettinger’s mother, Rhea, was the first person to be preserved at the institute.

The number of people who have gone through the process remains fairly low. (Prospective patients can cover the process through life insurance.) Alcor, the biggest name in cryonics, has only 134 people in cryopreservation. Ted Williams is by far the most famous, although Larry King has talked about signing up. Nearly 100 of the patients stored at Alcor’s Arizona facility are severed heads; only the brains are preserved. There are also at least 33 pets. Alcor patients hope that in the future, the technology to restore corpses to life will exist, and that Alcor will still be in business to revive them. Cryonic vitrification takes place after the subject is dead, because otherwise it would be considered murder.

Cryonics proponents refer to what we normally call “death” as “information-theoretic death” — the idea that death is irreversible. Clinical death, on the other hand, will become a reversible state when the tech catches up with what the mind can conceive. Cryonics supporters know the odds are not good. They put it this way: With death, there is a zero percent chance of resuscitation. With cryonics, there is at least a chance, however infinitesimally small it might be. They are aware that most human beings are unsettled by the idea of life on Earth after death for philosophical reasons. Will what comes back from death really be “you”? Or will a version of you cobbled together from your dead DNA with future technology be like Frankenstein’s monster, even if your brain is placed into a cyborg that perfectly resembles your old body? Or what if the technology turns out to involve mind uploading — the idea of taking the brain’s cell structures and information, essentially putting your personality on a new device? Mind uploading is still just hypothetical, but some transhumanists hope that the conscious mind will someday be able to exist on mechanical systems for as long as eternity. They say mind uploading makes some people uncomfortable because they don’t want to consider their brain and personality equivalent to a computer program, a series of executed commands that merely happens to run on an imperfect system called the human body, doomed to decompose. 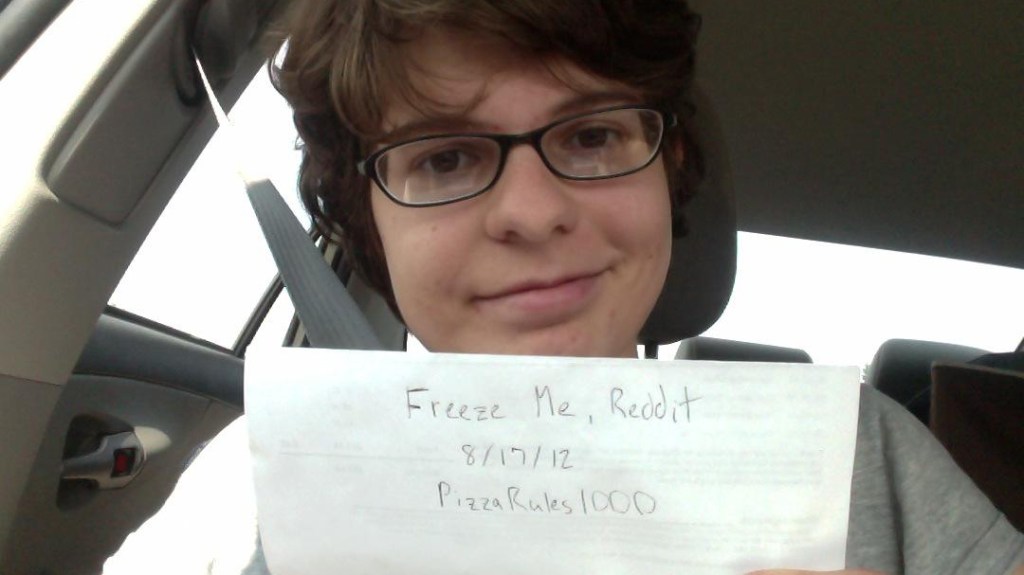 It’s easy to look at life extension as a kind of extreme narcissism, but it’s almost impossible to see Kim Suozzi’s request that way. An extremely smart young woman whose life had barely just begun when she received her diagnosis, she had exhausted all the options mainstream science had to offer. Doctors had told her that even experimental surgery on her brain stem would be pointless. The tumor would just grow back. She broke the news about her desire to be cryonically preserved to her Christian parents, who were upset about what it might mean for her “soul.”3 Suozzi’s dream to be around for the Singularity seems kind of modest considering all the historic milestones in her own life she was randomly destined to miss. She wrote, “I wish I could give a particularly compelling reason why I deserve another chance at life, but there’s not much to say. I’m still just a kid, and hadn’t even finished college when I was diagnosed. Unfortunately the most interesting thing I have yet to do is get a terminal disease at a young age.”

She decided not to tell them she was agnostic.

Suozzi initially raised $7,000 through Reddit before the Society of Venturism began to help with fund-raising. Alcor, which now charges $80,000 for neuropreservation, ultimately agreed to provide arrangements. Some people called it a folly, telling Suozzi to accept the inevitability of her brutally unfair death. But most Reddit posters saw it as an act of extreme hope from a rationalist who had reached the limits of rationality and wanted to keep pushing on. She signed off one post, “Live again or die trying.” The next year, Suozzi’s boyfriend posted an update, letting the board know that Suozzi had gotten her wish.