When it comes to “men with guns,” Antoine Fuqua is Hollywood’s filmmaker laureate. Since 1998’s The Replacement Killers, Fuqua has been making muscular, dark, often morally complex action films and thrillers. Equally adept at war movies (Tears of the Sun), cops and robbers (Training Day, Brooklyn’s Finest), swords and shields (King Arthur), and blockbuster fare (Olympus Has Fallen), Fuqua is a throwback to the two-fisted, pugilist filmmakers of decades past. Existing somewhere on the line between art house and cineplex, Fuqua is one of the more compelling and underrated directors working today. I talked to him about his new film, The Equalizer, which sees him reteaming with his Training Day star, Denzel Washington; the influence of Westerns on his work; and what it’s like to film a shootout in a home-improvement store. Warning, there are some mild Equalizer spoilers to follow.

When you look at your filmography, you’re part of a tradition of directors like John Frankenheimer, John Huston, and Robert Aldrich — bare-knuckle, genre movies that had a lot of intelligence and heart. Can you talk a little about where you see yourself in that line of directors?

Wow. Those are some great names that you’re mentioning. I would say I am a student of those guys, more than anything. I hope I can make something that will influence another filmmaker to want to make movies, and continue on the journey of making some tough films, with some moral dilemmas, and redemption. I guess that’s where I kind of fit in.

After a while, you have to filter out all their influences. You find your own heart. Oliver Stone, [Martin] Scorsese, those guys that have it. I remember Oliver telling me once, “You gotta find your Salvador.”

He was right. That was Training Day.

The Equalizer is set in Boston, but it feels more like The Outlaw Josey Wales than The Town or The Departed. You deviate from a bunch of guys walking around with wild Boston accents, and the usual Boston crime tropes.

I just felt like that’s such a cliché to do that. When you’re really dealing with Boston, as a whole, there’s different people, from different places.

What kind of research did you do on the influence of the Russian mafia on the East Coast?

Click here for all of our interviews with fascinating people from the worlds of sports and pop culture.
I read a lot of books, saw a bunch of documentaries, and spoke to a few different people — a couple agents, undercover cops — who deal with that world. Boston’s got its secrets. Any city that has a port has places where you’re going to get that.

How many people did you look at before you were settled on Marton Csokas for Teddy, because he’s really an all-timer in the sadist category?

He’s a trip man. He had a presence about him — a certain way to him. We had him come in and do a screen test with Denzel, to see how they looked together. Denzel was already sold on him, but I wanted to see him with Denzel. A lot of people can drown against Denzel, because of his size and presence. Marton was right there. 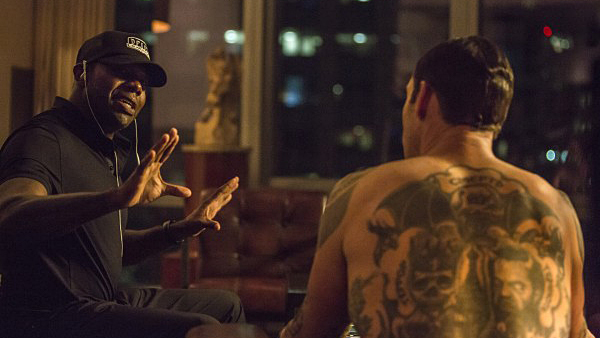 The tattoos shot, when he lifts himself up out of the chair, was a really interesting moment where I feel like the movie takes a breath and makes you realize what a mythical bad guy he is.

Yeah, that’s the idea. Like it’s coming over the city. That idea that evil is taking over. [Washington’s character, Robert] McCall is trying to even the playing field, and then this thing comes. That’s the idea with that shot — the world is turning upside down, you know.

The climax of the film takes place in a home-improvement store. So, you get the script and you come across the pages that basically say “Shootout in a Home Depot.”

The first thing that comes to my mind is, Ahhh shit. OK, more work — I gotta figure this out. But then you get excited, because I know Richard Wenk, the writer, we get along very well, so I said, “OK, Richard, let’s start laying this out like a real urban warfare.” I start talking to my guys — Navy SEALs, special forces guys — and I start to lay out a scenario with them. Then it becomes like kids in a sandbox. “What would you use?”

Coming from a realistic point of view, they say, “Well, there’s a lot of sand.” Then they really start talking and then you start making it fun, asking, “Well, what would you use?” Because the shelves are so wide and you can’t get in between them and you don’t want to be seen, and then you talk about different tools and you just become like a big kid. It’s fun, you know?

Have you ever been to a Lowe’s or Home Depot since you shot the final action sequence? I would imagine you can’t look at one of those places the same way anymore.

No, not at all, man. Now I walk around one of those places, and I feel like someone is going to arrest me. I look around at all the stuff in there like a weirdo, picking up things and saying, “Oh, this is cool.”

I would just think you would be in a Lowe’s, grabbing a hammer, and someone would say, “Can I help you with that?” And you would be like, “Yeah, can you kill a Russian with this?”

“You’re going to want this nail gun, man.” Looking over your résumé, what do you think it is that draws you to stories that are, for lack of a better term, men with guns? Does it have an inherent drama in there that you respond to?

The movies I grew up with, like Commando, Predator, and Lethal Weapon — those were hard R, action movies. I’m not thirsty for blood, but they take the edge off a lot of the action movies by making them PG-13. How much does rating impact the way you finish your product?

I think it affects it completely. I think that from the first frame you shoot, it affects it. I’ve been there before, with King Arthur, where I was making one movie, and I had to change directions during that process. It affects everything you do — your tone, the violence, the pace, everything for me. But now, when I first read the script, I talk to my agents and ask, “What is the rating?” I need to know, and I need it in context, because I need to know what movie I am making. Because I’ll start dreaming about the movie in a certain way.

You dream about movies?

Yes. You go in a zone. “I don’t even remember doing that shot.” That kind of thing, that happens a lot.

You almost black out.

Yeah, you do. That’s why filmmaking takes so much of your energy. I sleep maybe three or four hours, tops, when I’m making the movie. And then I’m editing on the weekend. It consumes me completely. I’m just in it.

You’ve worked with Denzel a few times now. What was something he did in this film, in his performance, that surprised you?

He always surprises me. The funny thing is, the first day of shooting, he was being really quiet. It was just interesting to watch him, because he just says so much with his form and movement. I could just keep rolling on him, sitting there, eating, and then he would stop and do something and it was always interesting for me. That’s the sign of a great actor, where they could still hold you. You don’t have to say everything, you can just do it. Behavior!

I read an interview with you back during Brooklyn’s Finest, and you said something about doing a couple of studio pictures to be able to go back and do something that you have complete control over. So I was curious about what you have coming up. I’ve seen rumors about Magnificent Seven and Narco Sub.

I’m doing The Magnificent Seven with Denzel. I’m starting in March of next year. You know, you can control any movie as much as you can control the movie. Even an independent movie is a business. The thing is staying true to your vision, staying true to what the movie is about. It doesn’t matter if you win the battle; you just have to win the war.