Archer, FX’s improbably, delightfully long-running animated spy comedy, premieres its sixth season this Thursday, January 8, at 10 p.m. Executive producer Matt Thompson chatted with Grantland this week about the divisive fifth season (“Archer Vice”), the show’s willingness to execute joy-buzzer handshakes on its own network’s prestige dramas, and how weird it is to him that people want to talk about this show in the first place.

The Archer Vice season bitterly divided our office. As you move back to more familiar territory, is there a particular part of that season you’re fondest of?

I like every single bit of it. I’m really proud that we put out a country music album. Because we fucking wanted to? Like, that’s crazy. I think the whole thing was a great, grand experiment/vacation. I’m also glad to be going back to regular work, you know? Like, you went and saw your friends in Europe for the summer, and now you’re gonna go back home.

So Vice was the bridge of your song, and you’re up to the key change now.

Click here for all of our interviews with fascinating people from the worlds of sports and pop culture.
Very much so. It’s a key change, but the song didn’t really and truly change. These characters are hyper-examples of human beings — the craziest, the most hedonistic, the weirdest — [but] you still believe, “Oh, that is so [that person].” They haven’t stayed static. They have done things and had experiences that have changed them.

But at the same time, the show’s done the same thing. Even though we went away and sold cocaine for a season, it’s still recognizable. This is a show about Archer. He’s a spy. He’s in dangerous situations. People are gonna die, and he’ll become a slightly better person and a slightly worse person.

Which are not mutually exclusive movements on this show.

They’re not. The first episode of the season, we see him running away from being a father, and running towards being a good father.

For our readers waiting for it to air, this episode includes Archer physically running away from being a father, right, not just emotionally?

The first episode of the season finds him just on a bender. Takes off, goes to the other side of the world.

How are you gonna play with the late-stage sitcom trope of introducing another baby into things? 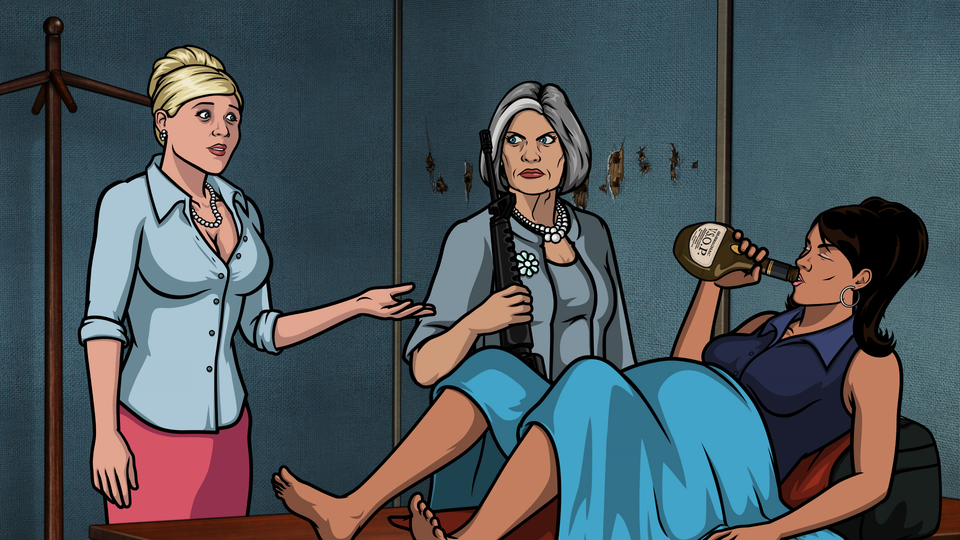 I think the single best moment that this show has ever had was the last episode of last season. Archer’s being introduced to his baby, and his ears are ringing, and he’s saying, “Did I have a stroke?” and then the baby gives him the one finger “wait” signal that Archer’s been doing to everyone for seasons. It just blew me away. I end up watching each one of these like 50 times, and the first time I saw the storyboards from this, I was like, “The entire show has led up to this one beautiful moment.”

Going on from there, it’s not about the baby. It’s about Archer as a man and a father, and it’s about Lana as a woman and a mother, and what it means to their relationship. And it makes for an interesting dynamic. The baby is a tool that deepens your understanding of these characters.

Lana, I think she gets tired, dealing with whatever incompetence. We consciously go at that a couple ways this season. We’re going to meet her parents, being played by CCH Pounder and Keith David, whose voices have such commanding presences, and they’re playing these liberal professors out in Berkeley. So that takes her out of her element. And later in the season, you’re going to see her as the object of romantic affection, and how she deals with that. So it’s a little bit about trying to break her away from just yelling.

So you’re not just abandoning the events of Vice as the characters return to agency life, which allows for things like returning Christian Slater as “Slater.” Was he an easy sell?

Christian’s hilarious, and a true fan of the show. You talk about continuity — I’m always surprised when somebody says, “Didn’t that happen in like Season 2?” and Christian will know. We’ll forget. When we first started talking to him about his character, it was like, “We want to call the character Slater,” and he was like, “If you don’t call the character Slater, I’m gonna be mad at you.” “Can he look like you?” “God, please!” He was just so cool with it. 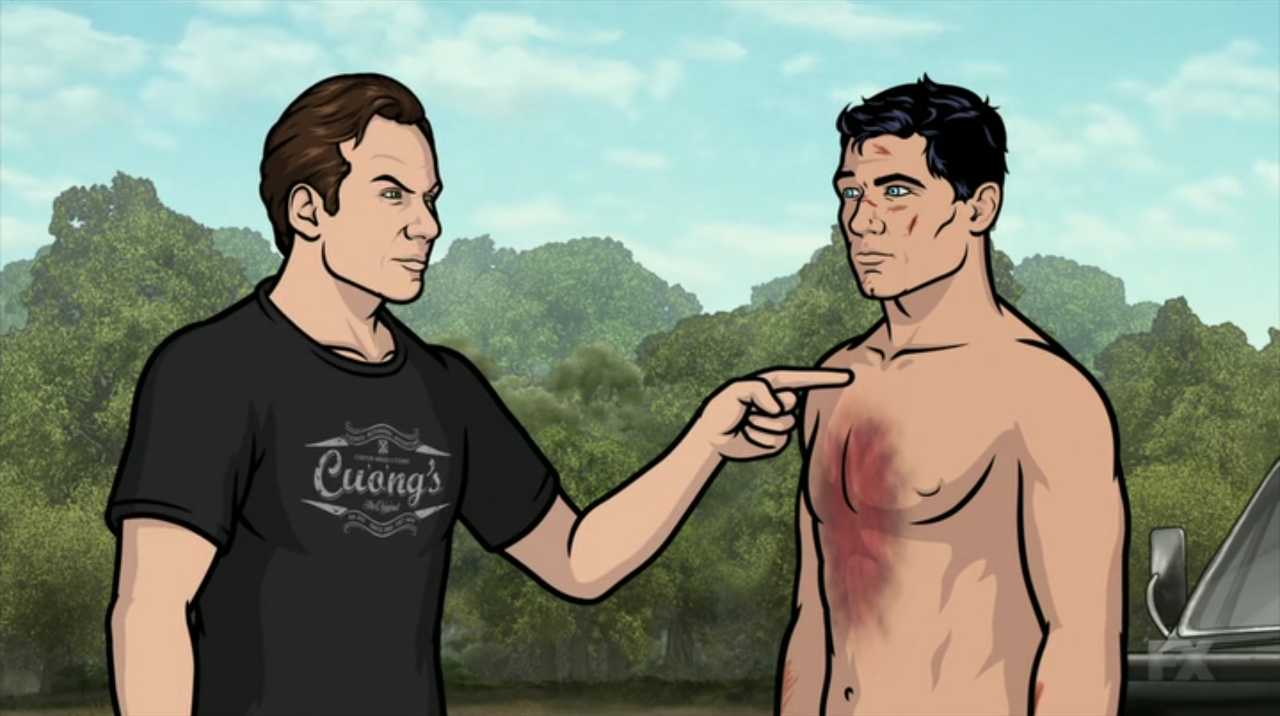 Speaking of early seasons, after the Honeypot gang popped back up last year, any more early recurring characters we should look out for?

We’re doing something like that again this year. We don’t like to talk down to our audience, and we don’t always necessarily fill them in. You don’t have to know, for the episode to work, but it helps. We’re doing the same thing this season with one of my favorite characters from Season 1, Conway Stern. He comes back early this season, and that starts off with Archer screaming, “REVENGE RAMPAGE!” and going for his throat.

Archer works really well when there’s someone who’s just as good, or known to be better than him, to play against, and that’s something that was missing from last season. All my favorite episodes, for example, usually have Barry in them, and he’s back this season as well. Also in that same episode is Allison Tolman, from Fargo, playing Pam’s sister.

Was following up Pam’s arc from last season a challenge? You’re in kind of a literal “how do you keep her down on the farm?” situation with her.

It was tough. I really did like what she did, and I liked that she got addicted to cocaine and was always eating it, and that was great, but we wanted big Pam back. She’s a better character as a full-figured lady.

And probably better in a fight in an alley.

I would agree with that. When you go to the movies and see some skinny Hollywood lady land a one-punch knockout, I’m always like, “Really?”

Now that you’ve achieved the Kenny Loggins guest star plateau, where do you go? Or are you at peace?

Same thing goes for an episode we’re animating right now with Matthew Rhys, who’s the lead on the show The Americans, but he’s a Welshman. We live in Atlanta, but we get to go to these L.A. parties every once in a while, like two a year or something. And whenever we go to these things, we always end up at the bar with Matthew for some reason.

And we’re at the Super Bowl, on the bus with all the Fox actors, and we’re waiting for Rupert Murdoch’s bus to be ready. And so Matthew decided he would entertain the bus, and he got up and told this story about Welsh separatists from the 1970s planting bombs, trying to blow up English governmental things, and he portrayed them as kind of bumbling guys who never get anything right. So, for the very first time, we’re getting a credit before an episode written “by Adam Reed after a rousing tale by Matthew Rhys.” And Matthew gets to play a Welsh separatist. He’s playing a character from Wales, but he’ll keep doing an American accent, and everyone will go, “That’s the worst accent I’ve ever heard,” and then he’ll put on a wig like he does in The Americans and he’ll go, “No, no, this is how I look, I’m an American,” and everyone’s like, “No, you’re terrible, no one will ever believe that.”

With production design being such a vital part of the show, was it creatively rejuvenating at all to go do something different for a season?

You want to talk about a bad business decision — there’s a reason why the Simpsons live in their house and wear their clothes. And we just decided you know what, screw it, we don’t need any of this stuff. That’s a very expensive, dumb thing to do. There’s a reason cartoons don’t do that.

What sets our show apart is, it does have a sexiness to it, and you’re seeing them go to exotic locales, and we aren’t just sitting in a living room, you know? It feels like a big, expansive, beautiful universe. It was really enjoyable to do it. At the same time, we are back. But in the very first episode, you’re going to see that we’re not just going to go back to the same old office as before, and there’s a really funny way that we treat that in the opening episode.

Which is where you work in jettisoning the ISIS name.

You’ll see it rollin’ out, like in the background, movers just getting it the eff out of town. Jon Benjamin’s got a really good joke: “We decided that we wanted to name it something that people hate less, so we’re going with AIDS.”

What freedoms did the two-season renewal grant you?

It’s the no. 1 thing that has allowed this season to look slightly better than past seasons. The third or fourth episode of the season is a big heavy nod to an old Clint Eastwood movie called The Eiger Sanction, where they go up and they climb this snow-covered mountain. And there’s this beautiful-looking avalanche. And that avalanche is a direct result of them renewing us for two seasons at once and giving me the wherewithal to have the money and to have the crew be more stable. It got better-looking. There’s a couple moments like that.

You’ll have been doing this show for the better part of a decade even if it never goes past this extension. Does the longevity of this thing ever just smack you in the face?

It’s nuts. Adam Reed and I have been making cartoons together since, oh my god, I don’t even know anymore. Nothing has been on the air this long or been this successful. The other thing is, we do live and work in Atlanta, where you’re not necessarily inside some industry thing. My friends are not people that work in Hollywood, so we’re not used to people saying, “Oh, what a great television show!” You’re talking about your kids and sports mostly. It’s unusual, so when we run into it, we’re like, “Oh, shit, this is our sixth season!”

Spotting Sealab and Frisky Dingo callback moments on the show has become its own Internet pastime. Do you ever get burrowed so far down in your own mythology for a joke that you get concerned for your own safety?

No, but there are definitely jokes, throughout things, that people wouldn’t know unless they knew us.

What’s the narrowest possible audience you’ve aimed a joke at on this show?

On our first show, Sealab 2021, there was this crazy delusional captain who was the leader, Captain Murphy. And in our Archer world, there was a leader of an underwater laboratory, and that Captain Murphy was played by Jon Hamm. He dies, and water rushes through, killing everybody, and in one or two frames of the background is an old character that the old Captain Murphy loved, Bucket Head Wendy, which is basically a bucket and a mop with a woman’s face drawn on it that he would talk to and was his girlfriend. It was for the 10 people that made Sealab to enjoy.

Last question, and this one has been burning me up: Have we really seen the last of Brett?

You know, Brett, who’s played by Neal Holman, our art director and producer who’s been with me for 15 years of me and Adam making cartoons, and I tell you, the day we killed Brett … that poor bastard. He was so sad.

Brett’s dead. He’s all dead. Good-bye, Brett. “He died doing what he loved … getting shot.” That’s a pretty great out line. 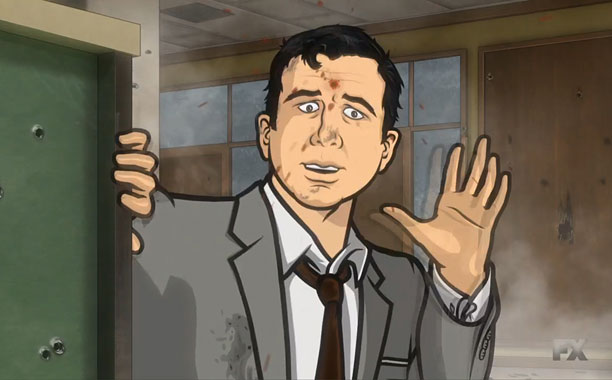