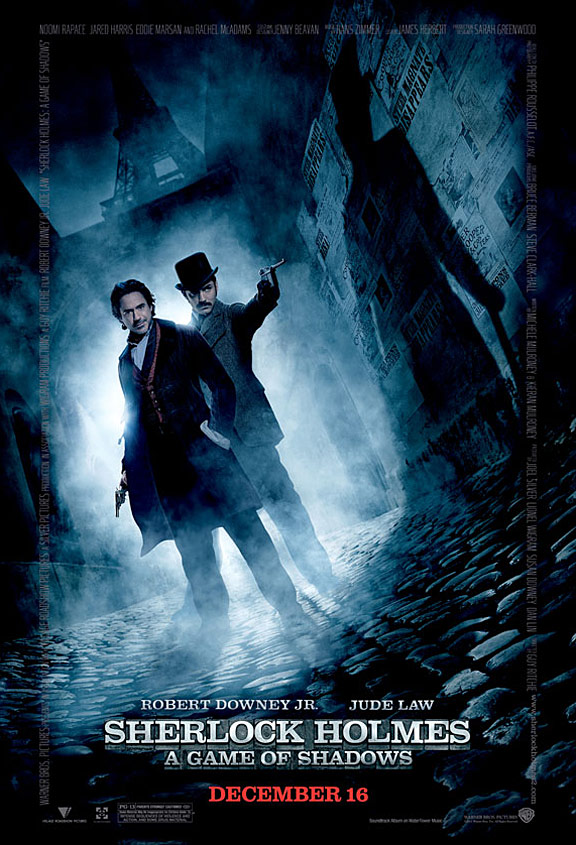 Sherlock Holmes: A Game of Shadows

What the art says: Warner Bros. needs to spring for a new tripod. Looks like one of the legs on this one broke. How else to explain the gratuitous diagonal angle? They might also want to invest in a printer that prints in more colors than just blue. Still, this poster isn’t half bad. The ominous Moriarty shadow is a nice touch, but Jude might want to turn to his right. He’s pointing his gun in the wrong direction.
What the text says: Nothing unexpected about the text here except for the way it’s snaking a path around the edge at the bottom. That was a bad idea. 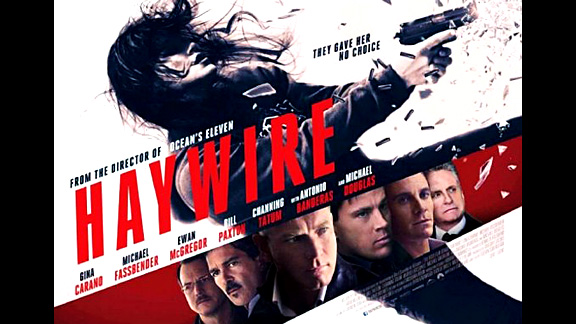 What the art says: That other poster was a bit too arty. This is the second one-sheet Relativity has released for Haywire and it eschews the moody, subtle approach in favor of the well-worn action-movie cliché of a diagonal gunman falling to the ground. Or gunwoman, in this case. That woman, for those who can’t see through her hair, is Gina Carano, a former MMA fighter whom moviegoers have probably never heard of. That’s why it doesn’t matter if her face is covered with hair. Think that would happen if Angelina were the star? Speaking of hair, that’s some poor mustache placement on the gentlemen. Both mustaches on the left? Can we get some balance, please? One last thing: Why use a painting of Michael Douglas when they’re using photos of everybody else?
What the text says: Steven Soderbergh’s name still can’t quite sell a movie. One day you’ll see “From Steven Soderbergh” on a poster, but that day isn’t today. As for the actors, Carano is the star so she gets top billing. No surprise there. You know what is a surprise, though? Fassbender’s billing over three actors with more recognizable names.
Tagline: “They gave her no choice.” On the first poster: “They left her no choice,” which was definitely better. This is a strong, ass-kicking woman, right? She doesn’t need anyone to give her anything — especially choices. 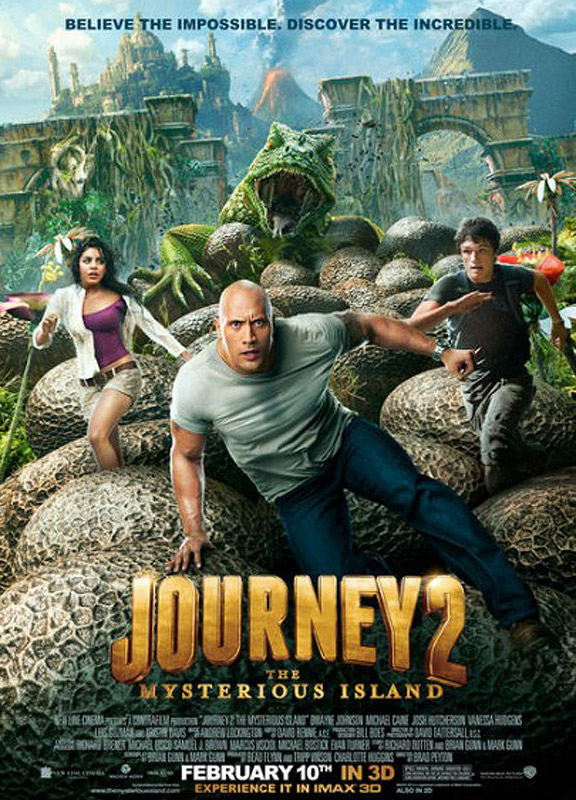 What the art says: It seems almost nit-picky to complain about bad Photoshopping on a movie poster, but this one is just too much to let slide. Look at this extra-large version, with special attention to the bottom of the actors’ legs. They’re cut off! How are they running from this lizard without legs? If that’s what this movie is about, then we’re in. It’s not, though. Here’s what we’ll never understand: If there’s a scene in a movie where this actually happens (and there is — it’s in the trailer), then why not just take a picture of that and use it on the poster? WHY NOT?
What the text says: Nothing about the actors or the director. (Talk about a missed opportunity — this is the guy behind Cats & Dogs: The Revenge of Kitty Galore!). Just a title and tagline. About that title, though: Are we crazy or did we total miss Journey 1? Ohh, this is a sequel to Journey to the Center of the Earth, starring Brendan Fraser. Well, that’s confusing.
Tagline: “Believe the impossible. Discover the incredible.” This sounds like a motto a college football team adopts for a season and plasters all over T-shirts.