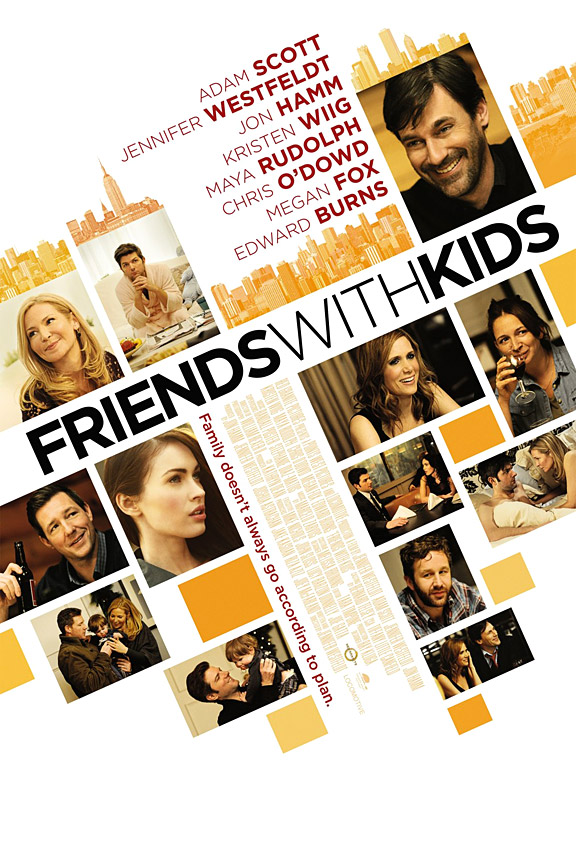 What the art says: Oh, it’s American Love Actually starring Jon Hamm and Megan Fox! Along with myriad funny friends! Watch the trailer and you’ll see that’s not it at all, though. The leads are Jennifer Westfeldt and Adam Scott, whom you can spot on this poster with one of those old-people page magnifiers. Hamm and Fox are just the prettiest people in it. The overall design of the poster — faces in boxes, skyline in background, boozing — reeks of pandering. It’s as if the studio assumes comedy fans will come for Kristen Wiig, Maya Rudolph, and Scott, so it needs a generic rom-com poster to rope in the brain-dead popcorn-munchers. But hey, New Year’s Eve is approaching $150 million worldwide six weeks into its run, so it’s hard to knock that hustle.

What the text says: Adam Scott’s nose might be too pinched to carry this poster, but at least he gets top billing. As for the tagline, blah. Here’s a new rule for movie studios to follow: If your tagline can be applied to at least a dozen other movies or any pro-life group, think of a better one. 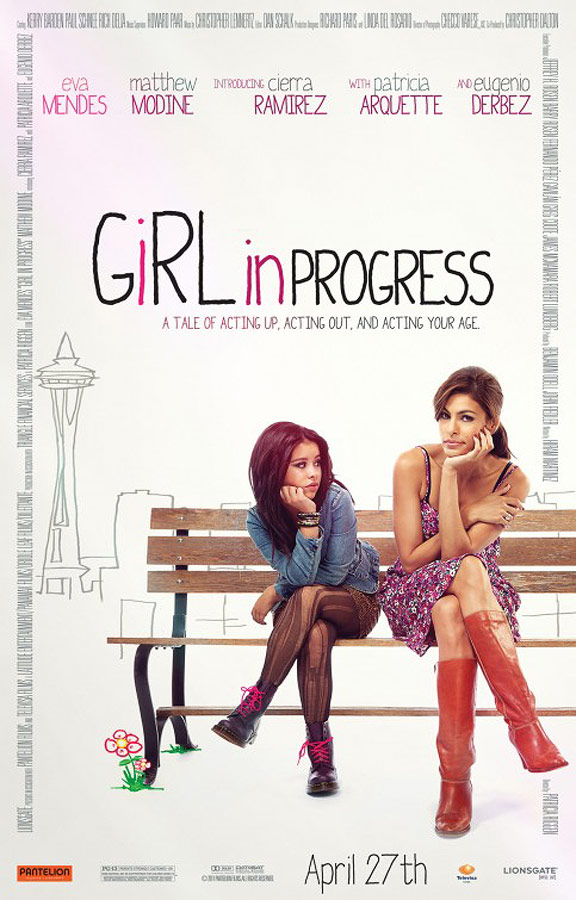 What the art says: These two ladies are going to have a crummy start to their relationship. But after some misunderstandings and maybe even a betrayal of trust, they’re going to realize they’re much more alike than they thought! Watching trailer to confirm … CONFIRMED. It’s not just the heads on hands and that look from the little one giving the plot away; it’s the bench. The classic bench poster pose almost always spells rocky relationship followed by love and reconciliation, though it’s usually used for a romantic comedy. See: Laws of Attraction, Must Love Dogs, French Kiss.

What the text says: We’re supposed to know who Eugenio Derbez is. Typically the “AND” billing is reserved for a big star who has a small role. The biggest thing this dude has done is ¡Rob!. We’re just going to assume he’s the Clooney of Mexico. Great job, Eugenio’s agent! Meanwhile, the font wants you to know how cute this movie is, in case the cute kid and the cute Mendes and the cute drawing of the Seattle skyline didn’t get that point across. It’s almost like the little girl wrote it herself. And with two different colored pencils. 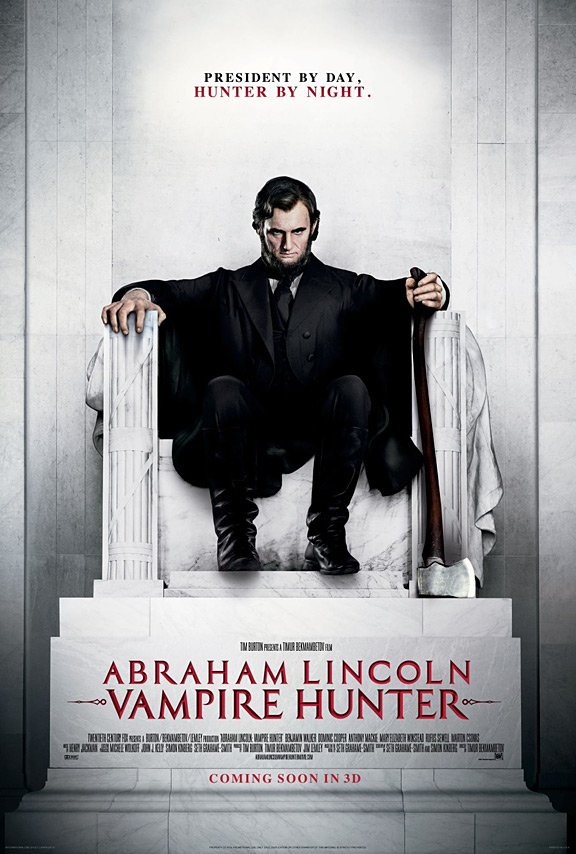 What the art says: The real Lincoln Memorial should be in color. And include an ax. Imagine how many more visitors that drab monument would get if the Great Emancipator looked ready to lop off the heads of blood-sucking hellions. As for what it tells us about the movie, not much. But with a hyperliteral title like this, it doesn’t have to. Maybe we can glean something about the movie’s CGI by the poster’s design. We hope not, though. A vampire-hunting president with cartoon hands would just be weird.

What the text says: Tim Burton fans have excellent vision. That’s the only way to explain the minuscule type used for his name. See it? It’s right above the title. Why it would be pulled from that jumbled mess of text at the bottom and not made bigger is a mystery on par with this. And then there’s the tagline — “President by day. Hunter by night.” — which deserves credit for out-literaling the title, no mean feat. You win, tagline! 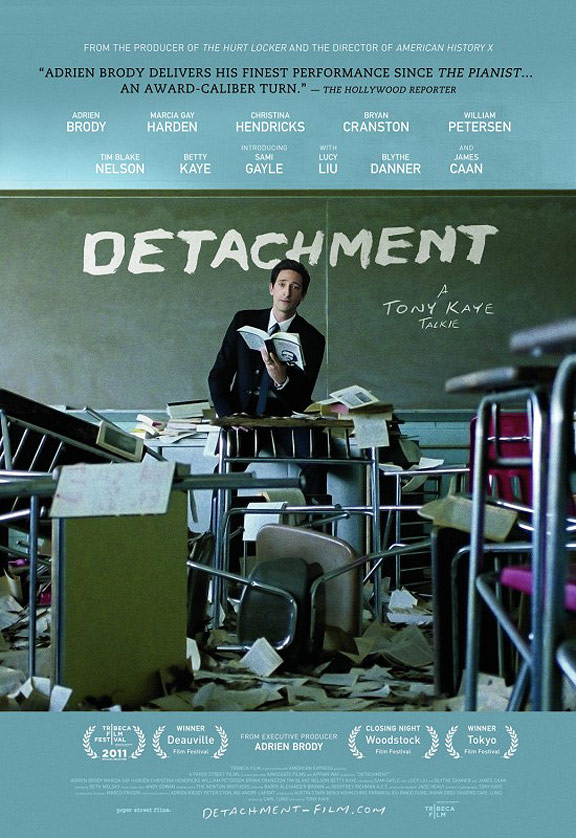 What the art says: Adrien Body is a bad teacher. Not only does his classroom look like he just had a parent-teacher conference with Mr. and Mrs. Taz, but the guy’s reading to a bunch of empty desks. With the exception of the mess, this is pretty much Teacher Movie Poster 101. Put the star in front of a chalkboard, write the name of the movie on the chalkboard, and boom, you’ve got yourself a Teacher Movie Poster.

What the text says: First off, damn, that’s a lot of text. Way up top, there’s billing for the producer and director tying Detachment to two movies that couldn’t seem more different. Then the billing. Not many surprises there, except for maybe Christina Hendricks winning the battle of AMC stars over Bryan Cranston. Down at the bottom are all its awards, which must mean something to someone somewhere. But the most noticeable bit of text is on the chalkboard. “A Tony Kaye Talkie.” Oy. It comes across as overly cutesy for a movie that looks overly serious. And it’s pretty damn self-indulgent. Sorry, Tony, but you’ve made one movie that anyone’s ever heard of. You’ve got to at least make a spectacle of yourself at NBA games before you can get this pompous. Right, Spike?