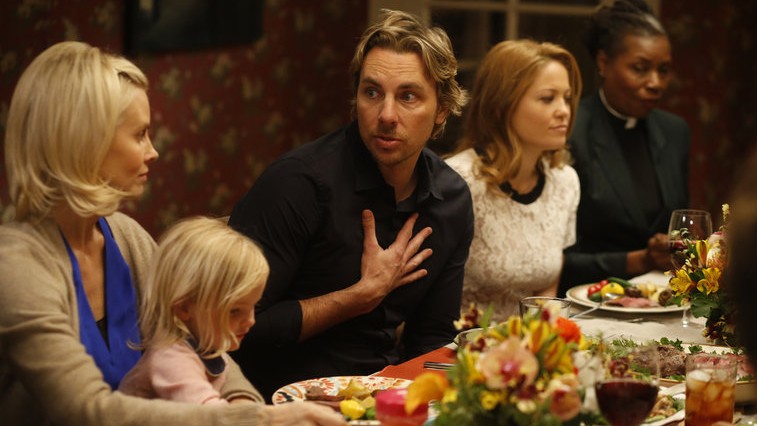 Is there any movie or television show in the history of moving images that does not benefit from a momentous dinner scene that forces the characters to confront their lingering issues? There’s a reason the dinner trope is so prevalent. It always works, and this week’s Parenthood is no exception. The entire clan assembled at the grandparents’ house, and each of the siblings aired a grievance. Parenthood is finding a unique comedic rhythm, though thankfully that is not at the expense of the tears.

Crosby and Jasmine’s daughter’s baptism occurred this week, which meant every character was saying the baby’s name over and over. Aida. That’s her name. Aida, as in the opera. Aida, as in there is no explanation for why they would pick such a bad name. Jasmine suggested it with no primer on why, and Crosby accepted. What a horrible name. Perhaps the writers said, “We imagine this fake child having a name that was never popular but reached an extremely modest peak in the 1960s. I suppose now that Haddie has been banished, another weirdo name had to be introduced.” This episode served as a reminder that for all its strengths, the Parenthood writing staff cannot be trusted to name children.

Erstwhile Parenthood fan David Jacoby recently pointed out that there has been a marked difference in Drew’s appearance. When did this guy develop such defined cheekbones? Now that he is armed with a less-Bieberesque haircut, Drew is suddenly the hot, comic relief of Parenthood, paired with an increasingly valuable roommate. Berto (the roommate) slept with Drew’s former flame Natalie, rightfully assuming that Drew had no claim since he had spent the last month engaged in a final dalliance with Amy. Perhaps guy code would dictate that Natalie was off limits to Berto, but he can’t be bound by rules. The Natalie situation led to a dispute between Drew and Berto over ownership of Gatorade and almond butter. In Berto’s defense, who hasn’t sneaked a few schmears of his or her’s roommates nut butter? Nick Krause was essentially playing his Descendants character, but what a delightful character that is. Ultimately, the roommate tension drives Drew to Amber’s apartment, where they get drunk and high together. Everyone wins, including us viewers.

Jason Katims says there are no rules in his writers’ room, but it does know when certain plotlines are more emotional. Last night, Zeek drops in on his estranged son-in-law, Joel, and it’s hard to imagine that the writers didn’t count on this provoking a few tears. Following Aida’s (ugh) pre-baptism dinner, Zeek shows up at Joel’s apartment to deliver a speech about how Joel was still part of the family. (The unannounced pop-in seems to be a Braverman special. Crosby did the same thing earlier in the episode, and Amber popped in on Drew last week.) Sam Jaeger recently spoke about how much he enjoys working with Craig T. Nelson, and he was probably alluding to this scene, though he couldn’t say so at the time. The Braverman patriarch adds gravitas to every scene he’s in, save for the scenes where he’s intentionally going for humor. We’ve only seen Joel interact with Julia and his kids over the few episodes, so I welcomed Joel’s tête-à-tête with Zeek. Yet for all the power he brings, Zeek Braverman is more of a caricature than any other member of the family. He often delivers a soliloquy that leaves the other characters speechless, or he swoops in to save the day, but his relationships are relatively shallow. We accept his marriage as fact, which is why Camille’s disengagement from it is jarring. He’s more of a constant deus ex machina than a fully developed character.

While we wait for the explanation of why Joel moved out, Julia begs him to fight for their marriage. I feel like she is acting as a mouthpiece for the rest of the us. Why isn’t Joel fighting for the marriage? WHAT HAPPENED? With five episodes to go in Season 5, we haven’t seen Sonya Walger in awhile. Joel sits in his trailer-office, listening to Julia’s pleas over the phone. As the camera pulls out and we can see the entire office, I waited for Pete to show up. An affair for Joel may be too simple of an explanation, but the frame, with him sitting in the dark office, seemed incomplete. There is something missing, and it’s the void that makes Julia’s phone call all the sadder. Her turmoil is senseless.