So how’s your Oscar Travesty bracket looking? Are you crushing it? Can you just about taste the victory ribs you’re going to order from Chili’s with that gift certificate up for grabs in your office pool? I wouldn’t know about that — the Grantland office has nothing riding on our individual predictions because we figured it was a little pointless if we all predicted the same final winner. While it’s true that there was a particularly contentious pre-tournament debate, most of that hair-pulling and mean-tweeting was about the seeding of everything else; we were largely interested in where exactly everything else would fall below that 1-seeded front-runner from 2005 we figured would win it all. But now, with everything we took for granted lying in a heap of flaming wreckage on an ethnically diverse block in South L.A., it’s time to reassess what we thought we knew about how much everybody hated Crash.

Let’s just rip off this Band-Aid and face our failures head-on. 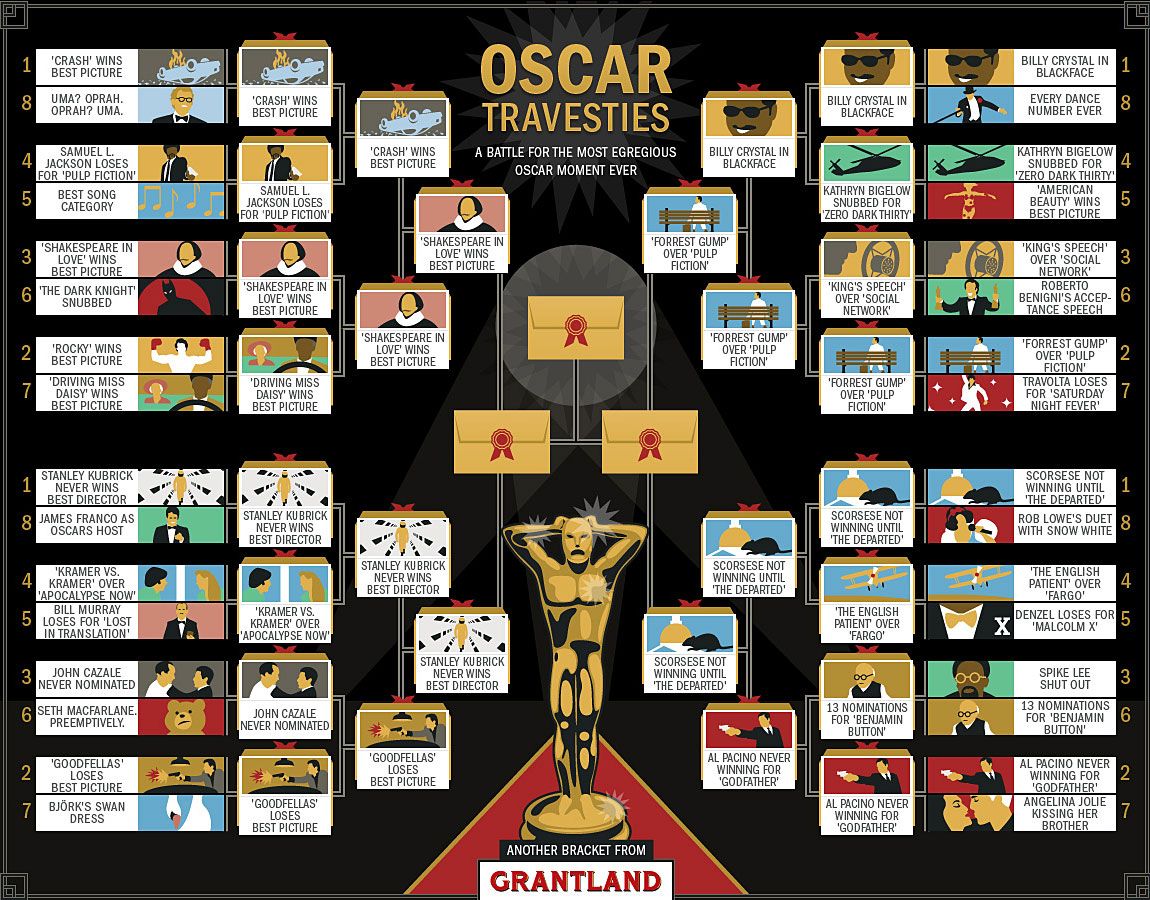 There are backlashes and forthlashes, and things that come back into style, and things that make us remember how young and foolish we were to have liked them at one point, but which we can still appreciate in a sort of “look how far I’ve come” way. Crash was different. Crash was supposed to be that rare bird, a true example of Objectively Terrible Art. And this was a great and beautiful thing: Our shared hatred of Crash as a people could come in handy with everything, from solving roommate disputes to making friends at a party to wriggling out of speeding tickets.

But now we’re sending a message I’m not entirely comfortable with: “Hey, guys. You know, Crash was not actually that bad.”

Has it been too long? Do we need a refresher? Here.

Yo, Racist Tony Danza, chill: You are no longer the wackest thing in the universe.

Speaking of forthlashes, I’m loving the retroactive Dances With Wolves reappraisal going on in the comments. If you don’t find yourself vehemently defending something you hadn’t really thought about since 1991, then it’s not a proper bracket. I’m just hoping the revival grows into an all-out post-ironic Tumblr subculture with its own nichey music genre. Now if you’ll excuse me, I’m off to go lay down some #wolftrap tracks.

I can’t tell if this is a vote against Forrest Gump or a show of support for Shawshank and Pulp (if there were a category for most posters sold at college campus back-to-school sales, one of these guys would have inevitably won, so take solace in that?), but it is definitely a vote for blackface. Congratulations, jerks. Way to stick it to Forrest and his mama and his feather and Lieutenant Dan. I suppose Gump had it coming; there’s little that makes our film industry, nay, our culture at large look worse than a sappy, heartstring-tugging film about perseverance of the human spirit being declared our favorite film.

Actually, I suspect Shawshank is the emotional peg more than Pulp Fiction in this particular contest, if only because last week I was witness to a 120-strong e-mail chain inspired by Alex Pappademas’s less-than-charitable words about everyone’s favorite prison-rape bromance, which managing editor Dan Fierman was all like “let’s put this on the blog!” about and Mark Lisanti and I were like “Yeah, this is hilarious!” until people actually started making vague threats to each other’s pets and/or Criterion Blu-ray collections. Lesson learned: People get very upset about The Shawshank Redemption. Which is great news for the freshly forgiven Billy Crystal, who is currently making a bulk order of shoe polish on the off chance that he’s asked back for 2014.

This time we had two irritating historical facts go head-to-head, with Scorsese coming out on top. Honestly, both of these seemed too whiny to me to be travesties — unlike, say, Stanley Kubrick, both men have Oscars, just not the Oscars we would have preferred them to get. Seems a little My Super Sweet 16 to me. But I know better now than to question our voters’ loyalty to the films they had posters of on their dorm-room walls. It’s gonna be a tough Final Four, Marty-heads. Time to start the Forrest Gump forthlash if you want any hope at all for the finals.