Mad Men creator/showrunner/secret-hoarder Matthew Weiner is notoriously suspicious of the media spoiling his work, and his notes accompanying the precious few advance screeners he allows have become the stuff of legend. This year’s electronic press kit, in fact, includes a thumb drive containing an individualized video in which Weiner menacingly scrolls down each critic’s Facebook page, dropping offhand comments about “what a shame it would be” if “something totally accidental” happened to any family pets appearing in their timeline, and then “liking” a photo of a blank tombstone. Going into the first half of the show’s final season, he’s never been more dead serious about preserving the integrity of his vision for each Sunday-night broadcast.

But has the unquestioned master of paranoid spoiler prevention finally slipped up? Or, more likely: Has he left us a giant clue to decode, because it’s impossible to imagine a single detail evading his meticulous, pet-threatening oversight?

Let’s examine the seemingly innocuous photo above from last night’s premiere party in Hollywood. Do you recognize the subject? Of course you do.

And he’s graduated from wispy mustache to full-on muttonchops. This can’t be accidental. Mad Men hasn’t wrapped forever, so it’s not a personal style choice.

We’re meant to see it. We’re meant to notice that young Marten Weiner — Matthew’s son, but you knew that already, and you also now he auditioned for that part, fair and square, #nonepotism — is displaying facial hair 100 percent identical to that of one of the most beloved fictional characters of all time. Here, we’ll make it easy for you: 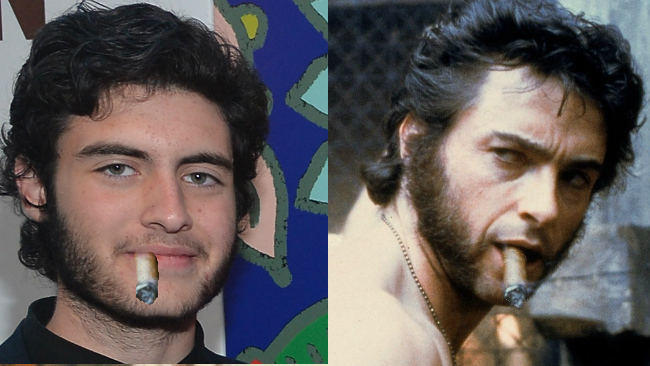 It’s all starting to make sense.

It’s all happening. We’d bet all the adamantium nickels in the world on it.

If you’ll excuse us, we need to get the dog to a safe house. Exposing the truth is always a dangerous game and we’d like to keep the collateral damage to a minimum.

(BTW, Sally Draper is Jean Grey and Pete Campbell is Cyclops. But that will become apparent much later. We’ve said too much.)