[Previously on Mad Men Power Rankings: Don chats with an understanding passenger on the red-eye … Roger has some friends over … Peggy tries to boost office morale … Kenny stays busy in his new position … Pete eats a pastrami sandwich.]

There are many ways the discerning Mad Men fan could choose to see Don Draper’s situation at the start of this final season, some decidedly less charitable than others. One could find him a pathetic oversleeper who snoozes the alarm at 7:30 and finally rises at 12:34, just to lounge around his apartment watching episodes of the Little Rascals, and who dresses only to attempt to bribe his secretary — who is reluctant to take his “car fare” because it makes her loyalty feel wrong, bought cheaply — to deliver office intel. One could focus on the hash marks that record his day drinking, and the roaches skittering out of sight, as if even they are disgusted by how he’s spending his time, turning up their noses at the disheveled, boozy figure caked in Ritz dust they’re now forced to live with. One could see him as a man caught in a dumb and easily discoverable lie by his truant daughter, who’d rather play along with the deception than be put in the embarrassing position of exposing it, because there’s nothing worse than having to tell your own father you know he’s full of shit. (Except, of course, walking in on him while he’s drilling the neighbor. Hair spray forever smells like betrayal, and that’s a place no teenage girl wants to be.)

One could look at him like that, sure. Fair enough. Are you taking anything for the jaundice in your eyes? Is it fun going through life with that yellow tint around everything? Maybe you should get that looked at. The world is not supposed to seem as if God Himself urinated all over it.

Let’s try this version of events on for size: Don — on a totally voluntary leave from his job because of an ill-timed bout of extreme honesty, and can’t we all use a little more of that in the office? — has become an early champion of the radical Three-Minute Workday productivity system, which allows him to hyperefficiently pack eight hours’ worth of office time into a brief face-to-face encounter with an assistant or proxy pitchman. This frees him up for all-day brainstorming sessions, or relaxed lunches with colleagues, or impromptu road trips that unexpectedly deepen the father-daughter bond. No one ever goes to one’s deathbed saying, “I wish I had spent more time pretending to be busy in small rooms adjacent to my colleagues.” But in one’s final moments, one does often enjoy a flashback to that moment one unburdened oneself to a loved one over a patty melt and an impish suggestion of dine-and-dash. Working just three minutes a day facilitates exactly that kind of radically fulfilling lifestyle. You can have it all, and Don Draper knows it. Now let’s get out of that three-minute suit and tie and get back to whatever high jinks Spanky and Alfalfa are up to on the tube — whoops, all out of whiskey and crackers, have the secretary bring some by later.

Don and Ed lock eyes across the sandwiches they’ve ignored in favor of their highball glasses. Don absently stirs his drink with his finger, anticipating an imminent punch line.

“So she’s sitting there on the conference table, Indian-style in a dress and boots like some kind of perverted kindergarten teacher, and she says … well, shoot, I’ll be damned if I remember what she said.”

“Oh! She accepted his death gracefully. I think I may have skipped a beat there.”

“Speaking of stories, Don, there’s one going around. About you.”

“One about a Hershey bar and a whorehouse.”

Don lifts his finger out of his drink. It’s immediately grabbed by a third man standing above them.

“I see a sheep and a wolf,” the new man says. He takes Don’s finger in both hands, raises it to his chest, taps it there gently as he speaks. “But which is which?”

Ed’s eyes flash annoyance. He did not expect this interruption from Jim.

“Are you taking lunches now?” Jim asks, still holding onto the finger.

“We’d love a chance to tell you how handsome you are.”

Ed reaches across the table and pulls Don’s other hand to him, gripping two fingers.

“Boys,” Don says. “I’m not even on the market. Noncompete. Partnership. You get it.”

Ed and Jim release Don’s fingers at the same time. Don reaches for his glass and takes a swig.

“Ed here was just telling me a story, Jim.”

“Was he? He always has great stories.”

“But mine are better,” says Jim. He turns and walks away. “I’ll tell you one sometime.”

There will come a time in this final season (have you heard it’s the final season? It is, sort of) when we’ll be forced to let go of what we thought we knew about where this whole thing is headed and slowly begin to accept that Matthew Weiner’s grand design may not include a significant body count. The Internet’s stubbornly obsessed entrail-readers, for example, will realize that Don’s not plummeting to the oblivion of that opening-credits sidewalk, nor will Megan meet her doom at the hands of the Manson Family, deliberately suggestive T-shirt choice be damned.

The definitive character rankings for each episode of Mad Men.
Accordingly, we will reserve the right to go back through the Power Rankings archives — housed in a secret tomb guarded by the angry spirits of the Previous Bobbys — and delete all entries of the largely moribund Sally Draper PatricideWatch. We will admit that it is increasingly unlikely that Sally, slow-burning, murderous schemer and onetime mutilator of defenseless Barbie dolls, will take her father’s life.

But that will not happen today. Not on the day Sally plays hooky to go to a funeral, when she admits that she contains potentially homicidal multitudes by revealing, “I’m so many people.”

“I love you, Daddy.” Are we buying that nonsense? Just because Daddy admitted his deception when forced to by circumstance, and then tried to ply her with a sandwich and low-level criminality? That’s really what brings them closer together?

Go back and watch that scene frame by frame.

When they get up from the table, Sally’s knife is missing.

Let us know. This is a promising theory; we feel pretty good about it. Much better than the T-shirt thing.

3. Joan Harris and Dawn Chambers (last week: 6 and not ranked)

There’s a new office for Joanie, upstairs with the boys in Accounts, away from the constant complaints and petty, secretary-shuffling demands of seemingly everyone else in the firm. She’s made her choice, and that choice is to get the hell out of Personnel Dodge and promote Dawn to her old gig. They both win big. (Especially Dawn, who began the episode as Don’s double agent and emerged the beneficiary of the middle fingers Joan extended toward intractable asshole Lou Avery and inveterate racist Bert Cooper. She’s got it much better than poor Shirley. Somebody should buy Shirley some very well-labeled flowers immediately.)

So now we know Pete Campbell’s predicament: He’s a cursed weasel-specter trapped in some wretched plane of existence that’s not Heaven, Hell, or Limbo, one where no one can feel his existence or hear the rattling chains of his eternal frustration. Forget last week, when the world was all sunshine and fresh-picked California oranges and pastrami sandwiches with the coleslaw packed right inside them like some goddamn left-coast miracle; that was just some transitional world he was floating through en route to the one where he gets no credit for new accounts he’s won, where his momentary victories have to be routed through Detroit, where he can’t even convince his comely real estate broker girlfriend to trade an open house for a sweaty round of YOU ARE SUCH A BIG DEAL at a suite in the Beverly Hills Hotel. Why bother with anything, really, when there’s nothing to look forward to but a slightly nicer office occupied by a soul-leeching mope?

“Our fortunes are in other people’s hands and we have to take them,” Bonnie tells him, but all he actually hears is the part about how acts of God are how you know when things are really against you. When he responds that he’s going to chew her up and spit her out, he’s actually expecting to choke to death on her underwear. That’s just the way things go for him.

5. Roger Sterling and Jim Cutler (last week: 1 and not ranked)

“I’d hate to think of you as an adversary,” says Jim Cutler as the elevator doors quietly slide shut, trapping him inside with a frustrated Roger Sterling. “Because it would be a shame if you were to return home one day soon to discover that I taken all of your acid and fucked all of your hippies to within an inch of their filthy lives. I know how to party, Roger. Don’t doubt that for one second. And I won’t clean the sheets afterward. You’ll know I was there, I promise. I have a musk.” 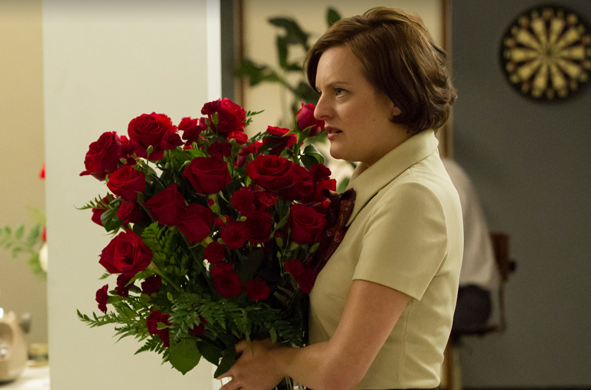 If Peggy’s emotionally shattering collapse at the end of last week’s episode had seemed like it was a little early in the season for a rock-bottom moment, well, here come 12 long-stem roses in a crystal vase, a heart-stabbing Valentine’s Day reminder that her life consists of her job and nothing else. It was even harder to watch her destroy Shirley over a potentially harmless misunderstanding than it was to see Peggy collapse in her apartment, the weight of her loneliness finally crushing her in a quiet moment. Her desperation to believe that Teddy was sending her a display of love from his self-exile in California — and the unexpected opportunity to show the office that maybe there was a happy part of her life they weren’t seeing — was something far sadder than her solitary grief. She was riding the lawn mower of despair, and Shirley was the outstretched foot of an innocent bystander. There was blood everywhere.

You know who wasn’t helping the Peggy situation? These guys.

“Maybe if you invite me you can have until Tuesday.”

“We now all know you don’t have plans for Valentine’s Day.”

You get the feeling that when she got out of that elevator, she immediately scratched that entry out of her day planner. Ginsberg shouldn’t be spying like that.

He could fly in from Detroit at any minute. You don’t know. He could pull up in two brand-new Chevys — maybe you forgot yours, so he brought a spare, the guys down at the showroom are real peaches — walk through that door with a coffee in each hand, a smile from ear to ear, and a story about the wonders of the Motor City. It could happen. Let’s pencil that in for next week. This is getting ridiculous.

“Just cash your checks, you’re gonna die one day.” So reads the framed poster on the wall behind Teddy Chaough’s desk, featuring a kitten falling off a tree branch, its tiny cat face twisted in passive resignation to its fate. From now on he can just point to it whenever Pete Campbell drops by in search of uplift or wisdom. He doesn’t have time for that. They’re both slowly dying out there in Los Angeles together, but only one of them knows it.