Vanderpump Rules this week? Not gonna lie, kind of boring. The Challenge this week? Made me sad. The Bachelor was solid, but it certainly didn’t knock my socks off. But none of this matters because THIS WEEK WE HAD ONE OF THE BEST EPISODES IN REAL WORLD HISTORY. Last week, when Sylvia’s “skeleton” arrived, got yelled at, and then left, I started to think, Maybe the whole skeleton thing is flawed at its core. After this week’s episode, I started to think, Maybe I should glue my eyelids open, handcuff myself to this couch, and just watch this episode forever. Let’s get into it:

The Shocking and Thorough Emasculation of Tony by Elizabeth

“Me and Elizabeth, we may fight, we may bump heads, but I am always going to love her.” —Tony

This episode completely changed the way I look at Tony. Like on-some-Bill-Cosby-shit changed the way I look at Tony. Going into the episode, I thought Tony was the universally likable cast member every girl wanted to sleep with and every guy wanted to have a beer with. He had a Southern charm, an infectious laugh, never got sucked into the “wolf pack” clique that formed in the house, and seemed to understand that Real World cliché hot, dumb blonde Madison was too into him, so he generally steered clear. Well, steered clear until he coitused her.

If you tuck the ol’ disbelief in the back pocket and buy the timeline that the show’s editors present, the next morning Tony’s “skeleton” came a-knockin’ on the door. Elizabeth is the girl Tony broke up with right before he was going on Real World, because, you know, he was going on Real World. She is also, um, well, I don’t know how to say this … [redacted]. Let me show a step-by-step breakdown of her worst behavior on this episode. This is a list of the actual things that happened, recorded on camera, to be televised to a national audience. 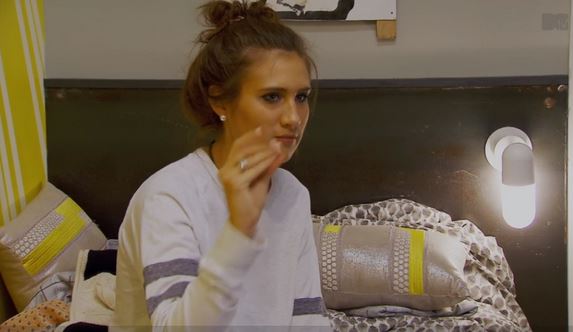 What is Elizabeth looking to get out of this experience? Seriously, what outcome was she looking for? Was she thinking, I’m going to go there, be disrespectful to all of his new friends, and belittle him every chance I get so he’ll realize we are meant to be together and then come home to me? Did she think she would become famous? Did she just want to see Wrigley? 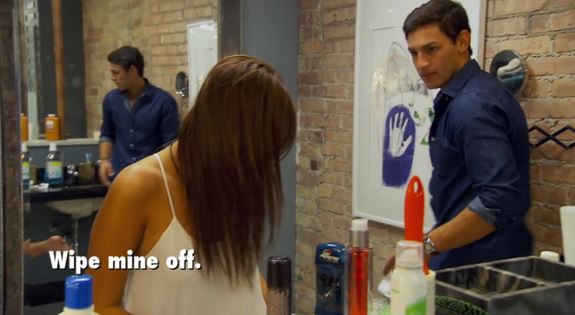 And what did this motherfucker do? HE WIPED HER FEET OFF! He’s just getting sonned at this point. Like he likes it. If he genuinely gets turned on by being a sexual submissive and has some sort of fetish, then cool. But if that isn’t the case, I don’t know why he doesn’t stand up for himself in this relationship. I would totally wipe a woman’s feet after a long day in sandals, but I would never wipe a woman’s feet if she demanded I do so. You simply can’t allow yourself to be treated like that. I should save the speeches for later. The worst is still to come.

Tony: “How am I going to help you find tights? What are you talking about? Open your own bag.”

FINALLY, he says something I would say. The tables are about to …

Elisabeth: “Please help me find tights or I am going to be really upset.”

Tony then goes and helps her find her tights. This may seem like a small issue, but anyone who has been in a relationship knows that small issues are big issues. If you push back on finding her tights and then go and find her tights without some concessions, you’ve lost your way. You know what I’m talking about.

This is when Elizabeth’s defense mechanisms broke down and she started acting human. No one can put up a front for that long. None of this explains why Tony allows her to treat him the way she does, but at least we know she isn’t a cyborg. As much as I disapproved of every single thing she did up to this point, it was here that I realized Elizabeth was really just fronting. She is hurt. She was acting that way because Tony hurt her feelings. That being said: This whole thing isn’t close to being over.

Not One Skeleton, TWO SKELETONS

As if Tony dealing with the roommate he recently coitused and his dominating, emasculating “ex”-girlfriend weren’t enough, the doorbell rings again. In walks the love of his life: a woman named Alyssa whom he had dated for eight years before he even met Elizabeth. Alyssa’s personality can pretty much be summed up with this picture: 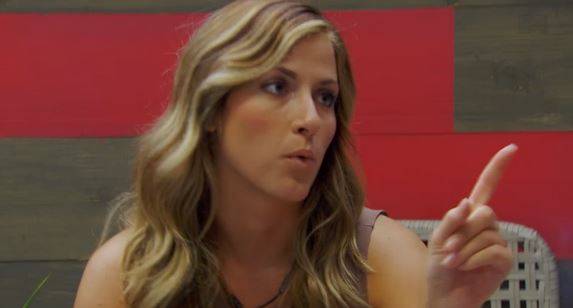 She was kind of fun, though: hating on Elizabeth, befriending the roommates, drinking with Tony. She had a confidence about her that was charming. However, one could see how that confidence could twist into something evil. Especially when Tony described her as “a bad bitch [who] has stalker tendencies.” And when she started to son Tony the way Elizabeth was sonning Tony, it got weird. Alyssa yelled at the top of her lungs, so everyone in the house could hear: “If you aren’t going to stand up for me and you keep falling for that, you’re a pussy! She is playing you!” It was so bad that the other dudes in the house listened with this look on their faces: 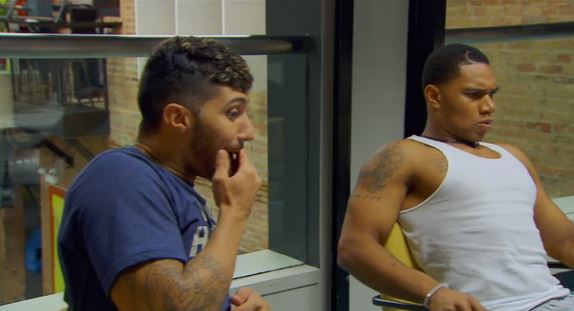 Tony’s response, and the only time he was remotely relatable through all of this, was summed up when he said:

Guess what? We will all find out what he’s going to do, NEXT WEEK ON REAL WORLD.

This Is What Bachelor Dates SHOULD Be

Jimmy Kimmel took the reins of The Bach from Chris Harrison and showed us all just how much fun this show can be when the person at the wheel realizes how stupid the navigation system is. He flourished with dumb one-liners that made me laugh out loud. He subtly pointed out how ridiculous the whole show is while still celebrating it. And he introduced the first date in the history of the franchise that reflects what being in an actual relationship is really like.

Remember this date from last week? 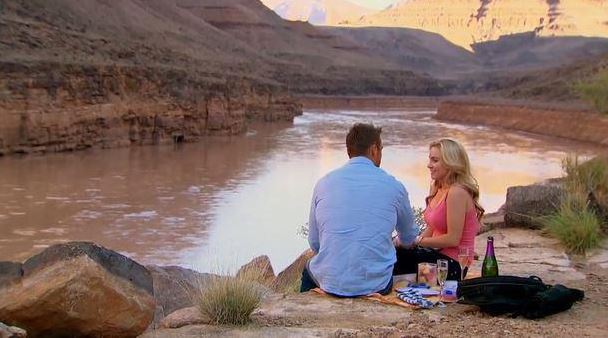 Well, check out the date from this week: 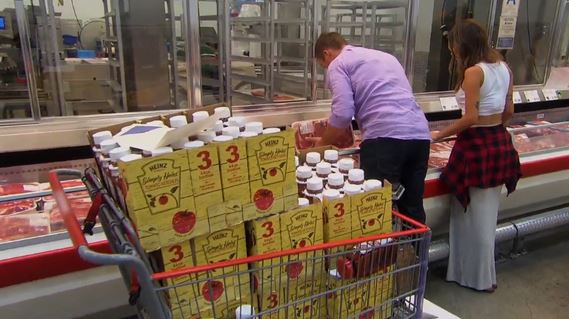 They are in Costco, shopping. Deciding what to make for some company coming over for dinner. That is what real life is like. I didn’t realize this until I moved away from New York. Costco is life. Preparing for people to eat at your house is life. Also, and I would have never guessed this, Costco is the hardest restaurant to get a table at in Los Angeles. Weirdest thing, it takes two hours to get a pizza there because it is so packed. I went from Di Fara to Costco and they both take two hours to get a pie.

Why do they keep blurcling Jillian’s ass? 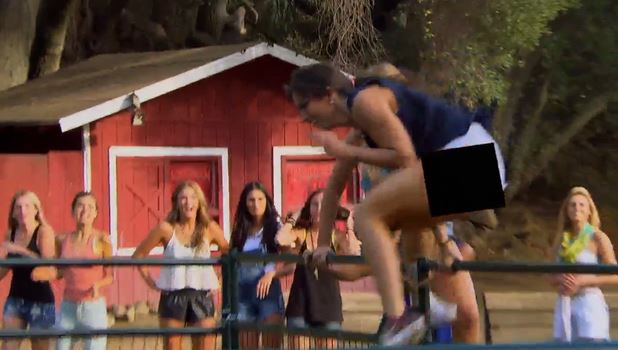 Is it because she keeps showing it? Do they not want her to show off her ass the way she wants to show off her ass? Are they jealous? There’s no chance it’s because it’s hairy (according to Drunk Jordan), but is it because of FCC regulations? How much ass are you allowed to show on network TV? I mean, she’s wearing shorts, right? Do they think it’s funny? Will something happen later in the season that makes this whole situation make sense? Am I the only one seriously concerned about this? No, no I am not. Thank god.

Dear Jenna on The Challenge: You Aren’t a Model

I’m not even Googling it. I don’t have to. I can tell. When I see Gigi Hadid talking about life as a model on The Real Housewives of Beverly Hills, I say to myself, “Damn, that chick is a model.” When I see Jenna on The Challenge talking about life as a model, I say to myself, “Poor, poor girl, using the word ‘model’ like that. She doesn’t even know how foolish she looks right now.”

Vanderpump Rules Has a Stassi Problem

Stassi on this show is Kevin Love on the Cavs: a potentially productive asset who just doesn’t fit into the dynamic of the franchise. The way Bravo uses her — still a part of the show but not friends with anyone on the show — is off. She doesn’t work at SUR, she isn’t involved with any of the drama, but she’s forced to act as if she is. She is basically being held captive by Bravo. I get it: If I were Bravo, I wouldn’t do another season of Vandy without her, but it isn’t doing it right with her. At least Stassi doesn’t think so. Come next season, I think Stassi will no longer be a part of the franchise. Will Love follow his Bravo spirit animal and do the same?

Like all Bachelors (and Bachelorettes for that matter) before him, Chris is making out with everything that moves. But this season the women are starting to notice. HOW DARE THEY? It has started an interesting “Wait a minute, this isn’t what I thought falling in love would be like” movement that is spreading throughout the cast and has led to, gasp, them even mentioning it to Chris. Again, HOW DARE THEY? The following is a list of references to Chris’s “prokisscuity” listed from “That’s kind of funny” to “The mold has been broken, they should just end the show forever”:

5. Chris explaining why he kisses everyone: “When there is a moment with a person that feels right and it makes sense, then I am going to do that.”

4. A girl he kissed asking simple questions: “Remember how we kissed? Why are you kissing everyone else too?”

Chris’s response: “Well, you know, that’s a good question. [Pause.] Well, I don’t know, I guess it is, ah, honestly kissing is something that is part of a relationship when you are getting to know someone.”

3. Chris, again, explaining why he kisses everybody: “I am here to find a wife, and I am trying to make it as real as possible and forget about the fact that there is a bunch of women.”

2. One of the girls Chris kissed on him kissing everybody: “At this point, I feel like he is kind of kissing everybody. I mean it is fairly early and he is kind of burning though ’em. You know, I have never been kissing someone that I know is kissing other people — I don’t know how I feel about it.” Please, girl, you have TOTALLY kissed a guy you knew was kissing other people. Who hasn’t?

1. Grantland favorite Kaitlyn keeping it ALL THE WAY 100: “You can’t take out a car without test-driving it.”

Oh wait, that last one was incorrect. Kaitlyn was talking about Chris eventually fucking everyone, not kissing everyone. Kaitlyn is far and away the Grantland favorite. I can’t wait until she has a sevensome on Bachelor in Paradise.

Listen to The Right Reasons, enjoy your weekend, and R.I.P., Diem.