To anyone familiar with the two acts, Majical Cloudz made perfect sense as an opening act for Lorde’s fall headlining tour, the one she announced not long after rejecting Katy Perry’s invitation to open for her Prismatic tour. The 17-year-old New Zealander and the Montreal duo fronted by borderline-ascetic Devon Welsh have both established their reputations as pop-culture outsiders with incredible mainstream potential. Lorde’s star has risen faster, of course, having been signed to a major label at 13 and having a no. 3–charting debut album three years later; Majical Cloudz, meanwhile, has opted for more organic growth in DIY circles, dropping a cassette, an album, and an EP before being picked up by major indie label Matador for their sophomore LP, Impersonator, which caught tastemakers’ attention last year.

Still, the two acts seem perfect for each other, not because they’re traveling the same path, but because they both represent the inevitable evolution the word “pop” has been undergoing in recent years, from a fairly predictable parade of obvious, classifiable hits to an uncertain terrain on which anybody can reach masses of people on a visceral and personal level without pandering to an idea of what mainstream tastes are or ought to be. That this tour is even happening is proof of that; it’s also indicative of an optimistic faith in modern pop audiences to accept something odd or even a little uncomfortable in the service of a new musical experience.

To anyone not familiar with Majical Cloudz, though, this pairing is not obvious at all. In the face of nearly 6,000 Los Angeles pop fans who have come to the Greek Theatre on Monday to see Lorde, whom they hear all the time on the radio and at the Grammys, the duo, whose shows and reputation up until this point hinged entirely upon trust and a nearly claustrophobic intimacy, has a not-small problem to surmount. It’s impossible to contain the open air, and it’s easy for newcomers miss the point of Welsh’s jarringly earnest stage presence due to unfamiliarity, or distance, or both: Back in the upper-level crowd he admits he can’t even see, Lorde fans laugh dismissively at the duo’s prolonged introduction, one behind me loudly exclaiming, “OK, buddy, we get it.” It’s all very high school talent show, the cool-kid peanut gallery mocking the performer in that perfect way you imagine now-legendary iconoclasts experienced as adolescents. 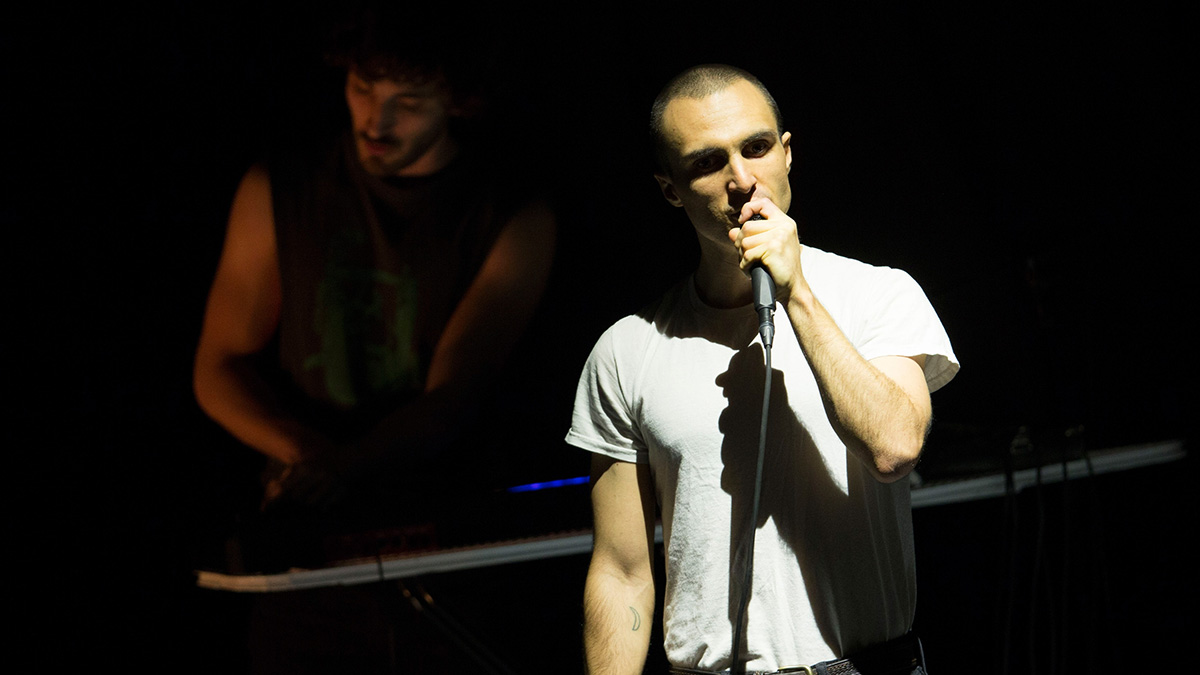 Still, Welsh does his best, which is impressive even from hundreds of feet away. A vast amphitheater is the polar opposite of everything that currently defines Majical Cloudz, but their spartan show is the same as it is in any low-ceilinged Brooklyn DIY venue; instrumentalist Matthew Otto has his sound board, Welsh has his stand-free microphone. The two are tiny compared to the vast blackness above and around them. Welsh shakes the hands of the folks in the front row; he acknowledges and thanks the odd fan shouting from the back, “We love you!”; and he still insists on sitting during “Silver Rings,” one of his most existential, desperate songs. (Woman behind me: “Is he gonna … lay down?” Later, sarcastically: “This is art,” and, “Depress me a little more. Shoot me in the head.”) Still, in this space the performance seems less experiential than challenging: It’s impossible to reach unwilling strangers in the dark recesses of a massive venue, so instead Welsh plays with the crowd’s expectations, taking uncomfortably long pauses between songs, during which random pockets erupt in awkward cheering and more “We love you’s,” assuming that’s what he’s waiting for.

The songs themselves are not difficult for an audience like this; in fact, the sparsely accompanied melodies, in contrast to the way they’re delivered, are perfect for the Greek’s sloping arena. Welsh’s voice is stronger than ever; the near-full moon rises as his wretched, wordless coda of “Silver Rings” sails through the open air and into the trees like a wolf howl. Where an equally underground yet more rebellious act like Matador label-mates Iceage might alienate themselves from an audience like this, parodying themselves to further make a cynical point about the masses, Welsh seems more like a quietly self-possessed schoolteacher (or perhaps a heartfelt troll, if you’re cynical), comfortably resigned to the fact that it will take a while for his wild students to get his brand of defiantly compassionate songwriting. He dedicates “Childhood’s End” to “all the fathers in the audience” — then hammers out the song’s opening lines with a hint of irony: “Someone died / Gunshot, right outside / Your father, he is dead.” It’s not hard to see why some critics (myself certainly included) have likened him to a prototypical, more pop-inclined Antony Hegarty, patiently waiting while audiences catch on, meanwhile evolving night after night.

And then, of course, there’s Lorde, the teen marvel who maybe didn’t have to wait for people to get her, but whose unlikely skyrocketing to the top of the charts was just as uncompromising. Here at the Greek, she’s among her people, one of many crowds the big-haired goth empress has charmed in the past year since the initial chart reign of “Royals.” Regardless of whether they know her from the blog buzz she received early on, or the countless, unexpected Top 40 spins she got soon thereafter, they are hers now. Both artists’ musical palettes are similarly cavernous, but Majical Cloudz’s sound is almost inherently agoraphobic, while Lorde blasts outward. It helps that she is accompanied by the pure exuberance of her staging; a spectacular light show, odd art videos, fog-filled bubbles, and impressive industrial-meets-krump dancing (only appropriate considering her goth-meets-rap aesthetic). Her self-possession is as assured as Welsh’s, and maybe even as forlorn, but she and her audience are Muhammad and the mountain, meeting each other halfway. Our en masse presence is essential to the playing out of her dream sequence.

When she doles out her own long-winded Kanye-esque monologues, the rowdy crowd pays rapt (or, OK, almost rapt) attention. These people paid for this, not Welsh’s weird, rather undeserved kindness, of course. When she sits, they crane their necks to see what she’ll do next. Before starting into “Ribs,” she asks us, “Can we do something corny? Can you put up your lights?” and the entire audience obliges immediately, smartphone flashlights filling every corner of the venue. This sort of attentiveness to a maverick of #authenticitycore, at the very least, foreshadows possibility. Maybe it’s only a matter of time before Majical Cloudz’s earnest compassion can fill an arena, too.