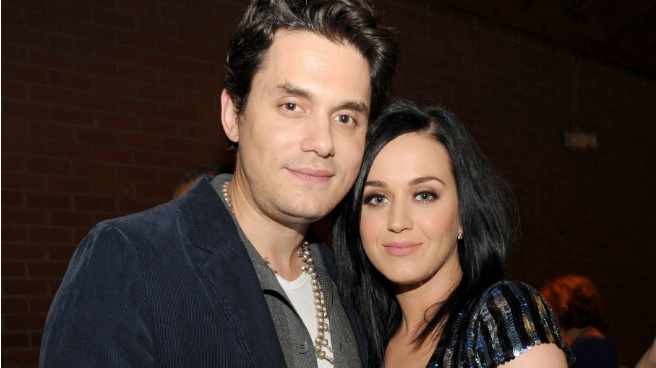 John Mayer & Katy Perry Split (E! News): “A source close to the pair exclusively tells E! News that Perry broke up with Mayer within the last few days.” A reason was not given but most people are assuming he cheated, since they were spotted together as recently as Valentine’s Day and Katy had been sporting a huge diamond ring. They made a music video together for Mayer’s single “Who You Love” and have generally been making a big public show of being very much in love, so who actually knows what the hell went down in private except for those two. They’ve already broken up and gotten back together once before so they’ll probably break up and get back together a few more times. Call me dumb, but I thought they’d make it!

Robin Thicke & Paula Patton Divorce (In Touch): Man, if these two can’t make an open relationship work, what hope is there for everyone else?

Ellen DeGeneres’s $40 Million Mansion Is Haunted (National Enquirer): “SPOOKY!” Uh-oh! “The talk show host has repeatedly been spooked by eerie noises and believes the home she shares with wife Portia de Rossi is haunted by its original owner, who died there in 2009. The house had been remodeled, so Ellen thought it would have no trace of the former owner. But she was wrong. Within a few nights of moving in, Ellen started hearing random noises, including footsteps and doors opening and closing.” I would watch this movie!!! “In the middle of the night, she heard a faint woman’s cry. Ellen is totally freaked out. She hasn’t had a solid night’s sleep since she moved in.”

Miley Ditched by Seven Guys in Four Months (OK!): Orrrrrrrr she’s not looking for a serious boyfriend because she’s on a WORLD TOUR.

Kendall Steals Kim’s Vogue Cover (OK!): “It’s War!” OK, I actually love this made-up narrative because it’s so Valley of the Dolls. I guess everything about the Kardashians is pretty Valley of the Dolls. The trap here is suggesting that Kim is too old and over-the-hill (33) to be a model while fresh-faced barely legal teen Kendall is on the come-up. But of kourse we all know how this will play out, with Kim getting the kover after all! And Kendall probably getting an edgy fashion editorial soon.

Tori Spelling Trapped (Star): “Too broke to leave Dean.” This seems impossible when your dad is Aaron Spelling. “Begs billionaire mom for money.” This seems more possible. “Dean brags: I’ll never stop cheating!” Can you imagine somebody actually bragging that out loud? It’s so goofy to think about.

“This always A list actor/director walked in on his celebrity wife having sex. More than once. She’s not very good at hiding things. He didn’t seem to really care.” (Crazy Days and Nights)

“The female half of this famous celebrity couple is really pushing for the altar. She is telling her friends that a marriage proposal is coming soon. That’s what she thinks. Although he joins in on the lovey-dovey act in public, he is privately telling his friends that there will be no proposal until she keeps one very specific promise she made to him: to stop drinking. We think he’ll be waiting on that one for a while.” (Blind Gossip)

“This almost A list celebrity/singer who was A+ list a few years ago was cheating on his celebrity girlfriend this week. The woman he was cheating with says the singer wanted her to take his microphone and put it where it would not fit in most people.” (Crazy Days and Nights)

“Which singer is willing to allow other men into his marriage bed if it will save his troubled marriage? This star has a reputation of being a ladies man with a large penis. However, in reality, he is terrible in bed and always too sleepy to make love! Now, his wife has had enough and he is willing to do anything to save his marriage. ‘He sings about sex and is super hot, but in reality he is a terrible lover. The marriage is almost SEXLESS!’” (Naughty But Nice Rob)

“Which newly single actor has been celebrating his freedom with wild nights out on Ecstasy?” (New York Post)

“Her drinking is now out of control. She gets drunk every time she drinks — which is several times a week — and cannot control herself. She thinks that getting drunk and obnoxious is what a girl her age is supposed to do, even though she has not been a teenager for a long time. After a night at the club, she will bring the party back to her house. She drinks straight from the bottle until she gets completely wasted. Then she likes to throw things: bottles, vases, picture frames. She thinks it’s funny to break things, and laughs while she does it. Her favorite thing to break? Anything that even vaguely reminds her of her ex-husband.” (Blind Gossip)

“Which top model had her boobs fixed by a plastic surgeon after she was overlooked for a modeling job for high-end lingerie firm La Perla?” (New York Post)