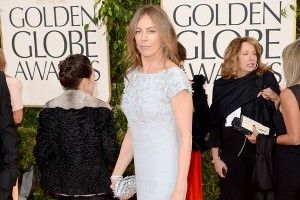 Personally, I’ve never had the press wage a highly visible veracity-campaign that led to an official Senate Intelligence Committee review into the CIA’s factual sourcing of my movie — but I can imagine it’s pretty uncomfortable! So hats off to Kathryn Bigelow for the smoothness with which she’s handled the debate over Zero Dark Thirty’s torture scenes: Whether it’s been on late-night TV or at critics’ awards, she’s managed to calmly reiterate her quite-convincing message that “depiction is not endorsement, and if it was, no artist could ever portray inhumane practices.” In other words: Come on, dudes, you all know some torture went down on the hunt for Bin Laden, and that’s why it’s in ZDT. I’m not saying it was awesome. I’m just saying it happened. (Special Bonus Hats Off to Bigelow for cooly dealing with this whole HUAC situation while also shrugging off her Oscar snub). Now — whether because she felt the conversation just wasn’t going away, or whether she just felt now was the right time to do so — Bigelow has weighed in more expansively, with a piece in the L.A. Times. You can check out the whole thing here, but here’s a sampling of the clear, succinct, and logically sound smackdown that Kathryn Bigelow’s dropping:

The Times asked me to elaborate on recent statements I’ve made in response to these issues. I’m not sure I have anything new to add, but I can try to be concise and clear.

First of all: I support every American’s 1st Amendment right to create works of art and speak their conscience without government interference or harassment. As a lifelong pacifist, I support all protests against the use of torture, and, quite simply, inhumane treatment of any kind.

But I do wonder if some of the sentiments alternately expressed about the film might be more appropriately directed at those who instituted and ordered these U.S. policies, as opposed to a motion picture that brings the story to the screen …

Experts disagree sharply on the facts and particulars of the intelligence hunt, and doubtlessly that debate will continue. As for what I personally believe, which has been the subject of inquiries, accusations and speculation, I think Osama bin Laden was found due to ingenious detective work. Torture was, however, as we all know, employed in the early years of the hunt. That doesn’t mean it was the key to finding Bin Laden. It means it is a part of the story we couldn’t ignore. War, obviously, isn’t pretty, and we were not interested in portraying this military action as free of moral consequences.