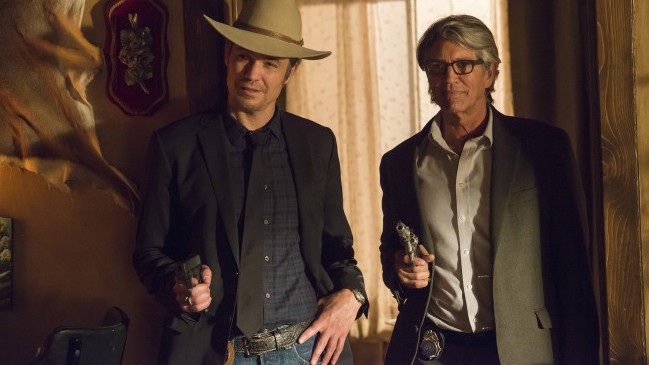 Previously, on Justified: The cousins Crowe started a firefight on a chance that was just a little too slim, and offered a solution that was just a touch too handy; Raylan sulked into vacation; Ava took steps toward a lucrative career in prison-drug-lording and alive-staying.

Tonight: A couple Batman moments, an assassination straight out of The Godfather, a vehicular interpretation of the 21-foot rule, and a whooole bunch of double bourbons.

By the time the opening credits twang up, the supposedly vacationing Deputy Givens has groused about Allison to a working girl in a bar (with episode writer Leonard Chang in a cameo as the barman), learned of the deaths of Johnny and Hot Rod’s associates south of the border, and burnished his dad-life cred by booking a flight over the phone. Wondering just where HR’s been this whole time? So is Raylan, who turns up at the Memphis outpost of the DEA looking to find out, which is where we’re introduced to Agent Miller, played by Eric Roberts in a turn so sublime, we’re going to have a really hard time shutting up about it. Roberts is marinating in this character, with his off-grid metalsmith hair and oversize pet revolver, and that slippery chortling “aaand eat some riiiiibs” plays even better in the episode than it did in the promos. (Compounding the delight of this slice of story is Miller’s acquaintance with Jay and Roscoe, which ropes the Harris brothers in for a tour de force turn as the hour’s Rosencrantz and Guildenstern.)

Hot Rod, as it happens, is imprisoned at his own tow yard, and manages to get a pencil into his jailer’s jugular, but not without getting gut-shot for his troubles. Miller and Givens arrive just in time to watch him bleed out, a tender scene between the DEA agent and the man who turns out to be his longtime informant. Miller proffering his flask and trying to be chipper while Hot Rod dies in front of him is one of the more moving moments this series has seen in a while, capped with a nice shot of the agent screwing the flask’s lid back in place as sirens rise in the background.

We open the hour on Carl, Danny, Dewey, and an armadillo “somewhere in Texas near the Mexican border,” which knocks out our idea of having this crew spend the rest of the season getting closer and closer to America and never quite making it, thanks to a rollicking cast of interloping bad guys, lawmen, wildlife, and possibly food-truck sushi poisoning (“Long in the Tooth” callback!). Wonder of wonders, Boyd’s henchbillies are back in the States, and undertake an exchange of goods (the bricks of heroin, packed in ice with a shipment of whole fish) that goes off without anybody getting shot, as well as a GETTING SHIT DONE montage with a brisk tenor. The imported drugs are being squirreled away in cars on the backs of a pair of tow trucks. We’ll come back to that.

Back in Harlan, Daryl confesses to having staged both the gun battle that killed off his coworkers and the convenient shipping course, and Boyd is NOT HAVING IT. Daryl threatens Boyd with accidentally-on-purpose losing Danny and Dewey and their haul if the Crowes aren’t made permanent partners in the enterprise. With full knowledge of how threatening Boyd usually works out and how nearly bereft of allies and resources he currently finds himself, how are we to feel about the power play here?

The latest in a long line of Boyd-and-Ava prison visitation scenes is a practical one, serving to set Boyd up with Rowena and her request to off the impeccably named Elmont Swain, but it’s a little heartbreaking, too. It’s been awhile, on the timeline of the show and in real life, since we saw these two together. Ava leaves the window in tears. Is it that he’s still holding out hope that she’ll ever get out of there? Is it that she doesn’t think he believes it? Does he? Boyd’s traded this whole series on supreme confidence, but can’t gloss over his defeated exhaustion here. “Your girl’s fixin’ to take care of herself,” Rowena will tell him later, and maybe for Boyd, that’s what hurts the most.

Meanwhile, on the road: Danny and Dewey, somewhat improbably, haven’t screwed Boyd out of their shipment yet; they’re just lost, with Danny objecting, “I thought you knew these roads!” and Dewey firing back, “I know the highways!” And given the events of “Over the Mountain,” these are both frankly silly positions — hey. HEY. LITERAL WRONG ROADS. Y’ALL. THEY’RE ON THE WRONG ROADS.

Guy Walks Into a Whorehouse With a Kitten Poster in It

A Crowe-Crowder summit has convened at Audrey’s, with a blessed, blessed appearance by Wynn Duffy, because if there’s one thing this entire operation is clamoring for, it is some adult damn supervision. This meeting is interrupted twice. The first additions to the discussion are Jay and Roscoe, who are entertaining an offer from Boyd to kill Daryl and take over transportation, which is the best idea Boyd’s had all day, A++++, would do business again. They, in turn, are interrupted by Givens and Miller, turning the parlor of Audrey’s into a clown car of gun-toting individuals who are all having very bad days, and Roscoe goes full Stoppard, with drugs, money, and revenge standing in for love, blood, and rhetoric. There’s an argument that can be made, if you really want to go there, that the brothers’ desire for money and/or drugs, but not revenge, actually puts them at odds with King Lear’s position in the scene Roscoe quotes here, but that would make this scene an hour long in itself. (Would that really be so bad?) Anything to put off the demise of Roscoe.

The last 15 minutes of this hour could’ve easily been spun out into an entire episode, and the last five are particularly jam-packed with information. Daryl explicitly states his strategy to kill off everyone between him and the Kentucky heroin pipeline. Miller and Givens part ways, and just when you think Raylan might have absorbed a teaching moment from his new DEA buddy regarding his future — Miller even kinda looks like him — here he is, back at the office, being an absolute shitbird to Art.

And here’s Miller, spotting the HR towing rig containing Danny and Dewey, displaying considerably more reluctance to shoot Danny than he did with Roscoe, and finding himself without the reflexes (thanks to a flask-induced slowdown?) to get off the road in time to escape Dewey’s screaming getaway in the truck. That last scream from Dewey is so bleakly funny, you forget for a minute that half the shipment’s now in the wind.

AVA: More than any of the other protagonists, and not just because she’s in prison, the former and future Mrs. Crowder appears to be backed into the direst corner at the moment. Killing Judith is a seemingly impossible task, one we couldn’t see a way around on first viewing — unless, maybe, she buddies up to her heroin-fiend blockmate to stage that fight Judith threatened? Is there any other way?

ALLISON: With Raylan losing sleep over their breakup (or at least spending so much time thinking about it), can’t shake the suspicion she’ll be back.

WENDY: The dynamic between mother and son gets sadder by the hour, however dedicated she might be to waiting around for the narcotics windfall to secure a comfortable future for Kendal. Look at his quick half-smile when she throws out the idea of getting him a fake ID for a bartending gig. Time and again, he wants to believe, like the kid he is. It’s easy to forget he’s a kid in the first place, between his tolerance of atrocity so far and actor Jacob Lofland’s easy facility with Leonard language. And the closer this relationship gets to normalcy, the more heartbreaking the inevitable late-season disaster is bound to be.

Inanimate Object of the Week (TIE)

Hard to choose between Dewey’s ruined pool, which Jay passes picking his way across Audrey’s yard, or the zebra bra (ze-bra?) he brushes by on the clothesline.

1. “Maybe you two should keep doing your constabulating and let us know where he’s at.”

5. “That’s funny, because we were just discussing ratifying some shit.”

6. “Miller, would you call this a herd, a gaggle, or a flock of assholes?”

7. “I’ve already torn you so many new assholes, you don’t know which one’s the original.”

8. “It seems to me you shoulda always been wearing it that way.”

9. “Because this one tastes like my ass on Sunday.”

Is Tayla’s full name “Tayla Tequila”? Ever wonder what might happen if Raylan finds out Ava’s safety depends on her trafficking heroin? Whatever happened to the hunt for Officer Half-Pint? While checking to see if there are more than two Dark Knight actors in this week’s episode, can you spot any movie coming out over the next two years that does not include Eric Roberts? Is the Godfather-inspired garroting of Swain a commentary on Boyd’s diminishing roster of capos? Will the Crowes’ raccoon smarts win out, or is Boyd playing a very tired possum? When Daryl tells Wendy he’s gonna “kill three people and take over the entire heroin business,” is he counting on the henchbillies to fall in line? Is this Dewey Crowe’s Shawshank ending? Dewey Crowe, headed for the Pacific?