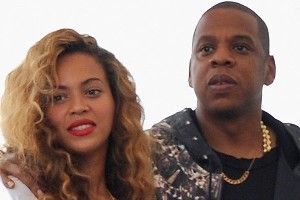 On Saturday night, Jay-Z played the last of eight shows christening Brooklyn’s brand-spanking-new Barclays Center, and Young Arena marked the climax with a move no less awesome for its inevitability: He brought out the mother of his child, superstar R&B and pop vocalist Beyoncé, for a quick little burst of bombast and spectacle. It was (at least according to this crystal-clear YouTube video, provided thanks to a livestream of the gig) awesome:

The first thing you might notice is that Knowles is playing fast and loose with her sporting allegiances here, readily swapping out any tribute to her native Houston Rockets for a Nets fitted cap. (And somewhere Jeremy Lin is all like, But half the reason I signed the offer sheet was because I thought it’d bring me closer to Bey!!!) There’s also that tentative butt slap Jay-Z lays down, which is most certainly the best thing we’re going to see all day. More importantly, though: Mere months after the birth of Blue Ivy (who, just for the record, does not yet have her own Wikipedia page), the all-encompassing Death Star performance experience that is Beyoncé seems to be quite operational. She even brought her A-game when it came to banter.

“I wanna say happy birthday to a special friend of mine — Gwyn, I love you” (Yes, Gwyn[eth]. According to US Weekly, Paltrow celebrated her 40th Friday night in NYC with a star-studded crew including Ethan Hawke, Mike D, and “BFF” BK: “The group ate, drank, and mingled to a low-key, lounge-like piano soundtrack … Paltrow and her pals ate chocolate cake for dessert, a source reveals.”)

Later, Jay and Bey came together for “Young Forever,” possibly the worst track Young Arena has ever recorded. But who cares?! Look at ’em together. Adorable.

Related: The Colossus of New York