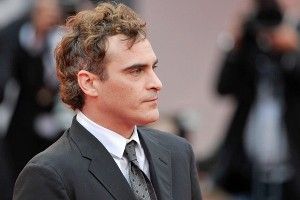 One of the many elements that makes Paul Thomas Anderson’s The Master such an object of fascination is the fact that the movie will be Joaquin Phoenix’s first project since he went woolly. The last time we saw the ever-talented Phoenix onscreen, it was in his fake-documentary I’m Still Here, in which he was bearded and incoherent and druggy and pretending to launch a rap career. Personally, I was always onboard with Phoenix and his buddy/director Casey Affleck trying to mess with us; getting Diddy to vouch that “Joaquin’s for real” will forever be a hilarious thing to do. For the most part, though, the long months of performance art rubbed the populace the wrong way, and the end result of I’m Still Here wasn’t nearly enough to convince the detractors it was all worth it. But those same anti–I’m Still Here–ians must now face an uncomfortable truth: According to the man himself, if Phoenix’s comeback performance — and, by extension, The Master as a whole — is any good, it’s because of that time he was pretending to be a rapper.

The New York Times sat down with Phoenix in Venice as part of The Master’s premiere at the Venice Film Festival, and got the breakdown:

[Phoenix] said that his last film – although greeted in most quarters with befuddlement or hostility – represented an important turning point. “It completely broadened my perspective on acting,” he said … “I wanted to have that same experience that anything is possible” … The lessons of I’m Still Here inspired him to experiment. “Going out on a stage publicly and not knowing how people are going to react to you – once I experienced that, it made me feel much more comfortable about going into a scene” … On The Master he tried out different interpretations of lines and scenes, even going for “things that might seem absurd or stupid or don’t make sense or are obviously, quote-unquote, out of character.” Mr. Anderson said that for much of the shoot, Mr. Phoenix stayed in character. Mr. Phoenix, for his part, dislikes the actorly pretensions of the phrase — “I just hate hearing ‘staying in character,'” he said — but he acknowledged the importance of sustaining tension in this case. “[His character] Freddie was so extreme,” he said. “I couldn’t physically release and let my body relax, then go back into it.”

Staying in character. Just like for all of I’m Still Here.

Early accounts suggest Phoenix’s performance is one of the best of his career — a career that has already nabbed him two Academy Award nominations. If this is the movie, as many predict, that’ll bring Phoenix his first Oscar triumph, let’s hope he really takes the time during his acceptance speech to point out that none of this would have been possible if he had never gotten involved with fake rap.