Homeland is not known for making sense for more than two or three episodes in a row. When everything is working, it can be a gripping thriller, but more often than not, especially over the last two seasons, it runs off the rails, throwing weird, unnecessary shocks, and, in a pinch, a redheaded ghost-terrorist at viewers. The past few seasons have forgotten one of the lessons of the first season — that most spy work is observation. The show used to wring unbelievable tension out of the concentrated surveillance of the Brody family. Now, Homeland has an almost terminal case of ADHD.

This chaos has consequences, not just for the coherence of the plot, but also for the legions of characters who we’re told are supposedly important, but get dropped without much comment. In particular, the show’s shift from the D.C. area to Pakistan means that an army of characters are stuck Stateside, without so much as a long-distance phone call or check-in via hallucination. There’s a veritable graveyard of Homeland characters who have just dropped off the map, even thought they could theoretically still be integral to the plot. Here are a few of those dearly departed characters, along with some educated guesses about what they’ve been up to.

The boy who wasn’t there. Chris Brody’s sister, Dana, was always a more interesting moral foil for her father, and she received the majority of the family’s and show’s attention. There was only room on this show for one interesting child character. Chris’s plight was not unlike Walter Jr.’s on Breaking Bad. That character was pushed aside when it became clear Jesse was the more interesting partner for a father-son relationship with Walt. So Walter Jr. was doomed to a life lived at the breakfast table, and Chris was forced to stumble around the fringes of the show and his parents’ fraying marriage, not knowing that his father was a terrorist.

What he’s probably doing right now: Sternly being told to leave his room, and tweeting about Bradley Beal to his 70 followers.

For all that people complained about Dana’s story lines (remember when she and her terrible boyfriend killed a dude?), she’s one of the better characters Homeland has produced. Played convincingly by Morgan Saylor, Dana was a real, live, interesting teenage girl, and vital to the central plot of the show. Dana Brody is a dearly missed presence on my television. I held out hope that somehow she would be roped into the spy game, Kim Bauer–style, carrying on the Brody legacy of being bullied into doing dangerous things by Carrie. But, sadly, she disappeared from the show.

What she’s probably doing right now: Attending Vassar, on and off, spending time in a collective of DMT users and participating in protests against drones. #Occupy

Remember when Carrie, like, almost drowned her baby? And it seemed like this season was going to dig into her motherhood, and what she was sacrificing by functionally giving it up? Nope, neither do I. With the unfortunate death of James Rebhorn (who was excellent as the Mathison patriarch), Carrie’s sister Maggie became the moral compass of her family, the force weakly trying to pull her back to the States. But when the shit actually hits the fan and the drones start flying, nobody wants to hear anything about Carrie’s family.

What she’s probably doing right now: Waiting for a Skype call that will never come.

Carrie’s go-to guy for illegal surveillance was crucial to the show, back in the day, when he spearheaded her efforts to spy on Brody. But as Homeland became increasingly about the romance between Carrie and Brody, Virgil’s role shrunk. His awkward brother Max is part of Carrie’s team in Islamabad, hanging out with Fara and Quinn while they wait for Carrie to make important decisions. As entertaining as Max can be, it’s really a bummer that Virgil’s gone. While Mandy Patinkin’s Saul is a great grumbly dad figure for Carrie, David Marciano was a perfect weird uncle.

What he’s probably doing right now: Running a back-alley service to prevent the NSA from being able to read your email (for an additional fee, he also removes DRM protection from your iTunes library).

Saul has a wife! And she was mad at Saul for wanting to get back into government at the beginning of the season! You’d think the CIA would tell her that he’d been kidnapped, or something? Or that she’d have noticed when he didn’t come home or call, for however long he’s been gone for? The healing of Saul’s marriage was a surprisingly down-to-earth subplot for Homeland, focusing on the quiet costs of a life spent in intelligence work. Now, the stakes for Saul are insanely high and Mira is nowhere to be seen. Oh well.

What she’s probably doing right now: Hopefully on a plane to Pakistan? Or making some phone calls asking where her husband is? 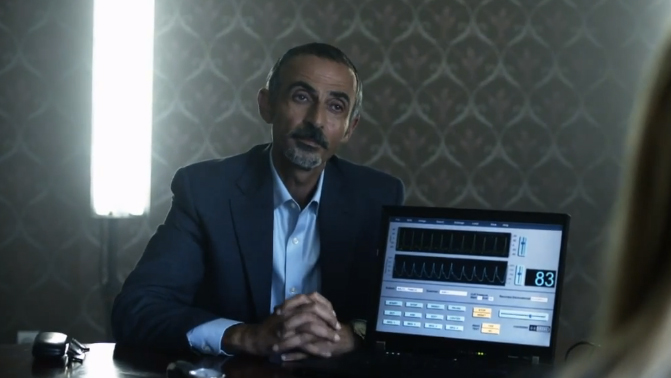 Getting Javadi, who planned the Season 2 CIA bombing, to be the Iranian intelligence chief while spying for America was basically the whole point of Season 3, right? Lockhart gave up Brody to be executed so Javadi would get promoted, and Carrie got placed as the station chief in Istanbul so she could manage him as a source of information. Naturally, ongoing tension between the CIA and its biggest-ever asset would be a crucial part of Season 4. Except that he’s nowhere to be found. (Has anyone even mentioned him?)

What he’s probably doing right now: Sitting on a file with all of the information Carrie needs to save Saul from the Taliban, waiting for someone to just call him and ask nicely.