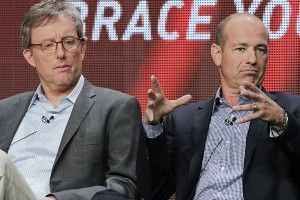 Usually you have to wait until after a critically acclaimed TV show ends its turn to get the next project from its creators. Howard Gordon and Alex Gansa, the power duo behind Homeland — which as you, I, rational men and women everywhere, and the people who vote for Emmys now know is a goddamn fantastic piece of television — have decided to go ahead and just get that over with now.

Variety reports that GoGans (not officially their nickname, at least for now) have landed an early pilot-production order from CBS for a show called Anatomy of Violence, which they will co-write. The series is based on an upcoming nonfiction book The Anatomy of Violence: The Biological Roots of Crime, and “concerns a female FBI agent working with a mysterious psychiatrist with whom she shares a past connection.” If you’re worried that sounds fairly procedural-y, well — that’s understandable. It is CBS, after all, and these guys did used to work on 24. Maybe the reason they decided to double up their workload was because they knew Anatomy wouldn’t be quite as ambitious as Homeland? But that shouldn’t totally temper your expectations. In fact, get psyched: We’re talking about a new project from the creators of arguably the best show on TV right now! We’re talking about GoGans! (Is it catching yet?)