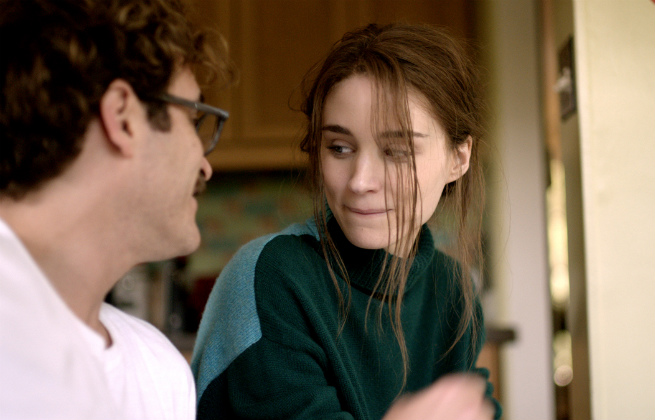 I was tricked by my computer. With a 93 percent “fresh” rating on Rotten Tomatoes and good word of mouth from friends on Facebook and Twitter, I was not planning to dislike Spike Jonze’s Her. What I felt can only be called ambivalence, because I am still thinking about Her several days later, wondering what the difference between me and everyone else is that I felt absolutely nothing the whole time. Feeling nothing might be the point of the movie. It’s about the post-divorce anhedonia of a handsome nerd named Theodore Twombly who has begun to prefer the warmth of screens to that of his fellow human. Her is full of a lot of interesting ideas and has some extremely clever conceptual executions, but that’s mostly what it is — clever. I’m still trying to pinpoint what put me off exactly, and what it says about me that I didn’t love Her. I have nothing against the concept. I like the 1984 movie Electric Dreams, which features a love triangle in which one of the participants is a computer with the voice of Bud Cort who becomes sentient after being sprayed with champagne.

Rooney Mara plays Twombly’s ex-wife, Catherine, who may or may not be based on Sofia Coppola, depending on whether you think the personal-seeming Her is a roman à clef. If you do go with that theory, based on the way Mara’s character dresses in the tailored cool androgyne style favored by Coppola, the movie offers a kind of insight into Coppola that her own movies don’t. For the first time, I understood how Jonze and Coppola had been in love with each other in the ’90s, when they were the coolest-seeming L.A. hipster couple ever. Because they are both such private people, the public never really found out how the breakup shook out. But Her and Coppola’s 2003 film Lost in Translation offer a couple of different Rashomon-style takes on the end of what had been a loving and enviable partnership between two artists. In Lost in Translation, Coppola had Giovanni Ribisi play a Jonze stand-in named John who was a self-absorbed coolhunter and flirt. He leaves his beautiful, glum wife alone in a hotel, preoccupied with work and a blonde Cameron Diaz clone played by Anna Faris.

Her is fascinating to think and talk about, especially as a companion to Lost in Translation. These are two films by two people whose art is about how they are unable to express themselves, albeit in the form of two cinematic subtweets spaced more than a decade apart. Joaquin Phoenix plays Twombly like a sad Muppet, but there’s something so baseline creepy about Phoenix that you’re never quite sure if Twombly is meant to come across as a sociopath or if that’s just the way Phoenix’s face looks. I kind of wish Jonze had played the main character himself, because I would have found him a lot more likable, and his voice is inherently funny. In high-waisted pants, a mustache, and glasses, Twombly looks like a youngish Walter White.

There was a time when Theodore could experience pleasure, but now his life is like a French New Wave movie about bourgeois discontent. In Lost in Translation, Scarlett Johansson’s sullen rich-girl protagonist was granted a manic pixie dream Bill Murray to have adventures with. In Her, Twombly is given a ScarJo voicebot. Theodore has only been divorced for a year, and presumably this has been the worst year of his life, taking him to an emotional rock bottom where he would rather date a computer than a human being. But we are meant to see that it’s only because he is so fucked up from this particular relationship, not because he is so damaged to begin with that he can’t maintain equal relationships with women at all. The problem is that now his relationship with Catherine is an unattainable gold standard that he is worried he’ll never reach again, and which failed anyway. Twombly enjoys being friends with women platonically, including a former college classmate played by Amy Adams in a frizzy wig much like Cameron Diaz’s from Being John Malkovich. Jonze’s ex-girlfriend Karen O contributes a song to the soundtrack that she has co-written with Jonze.

Her gives Jonze the chance to defend himself against the way he was portrayed by Coppola in Lost in Translation. Theodore’s not self-absorbed, he’s introverted! He’s not a flirt, he just believes in friendships between men and women! Given his chance to paint Coppola nastily, he instead puts the ex-wife character on a little bit of a pedestal. She’s just a neurotic while he’s essentially happy-go-lucky, but he respects her for that. He’s kind of a silent partner in relationships, but it’s not because he’s trying to disengage. He just expresses himself better in ways other than speech. He loves her, but he also loves twombling around with programs for hours on end. He wishes he had tried harder to make the relationship work, but he’s also so passive that he has let opportunities for self-improvement float past him while he scrolled.

The casting of Mara as a Coppola doppelgänger is brilliant. Mara has a similar kind of sophisticated insouciance and transfixing offbeat beauty. Although she has only been in a handful of movies and did the requisite stint as a day player on Law & Order: SVU, Mara has shot up into the ranks of her generation’s best actresses. She has a ’70s feel to her, whether it’s because of her goth-for-Hollywood looks or a general spooky Sissy Spacek quality. Mara as Coppola is genius because, like Coppola, Mara shares an expensive bloodline, and because Mara actually might have made a good Mary Corleone. David Fincher made Rooney into a star by “discovering” her after she’d already starred as the new Nancy in the reboot of A Nightmare on Elm Street. He cast her in the crucial first scene of The Social Network because she reminded him of Katharine Ross in The Graduate. Pretty, but what she’s really playing is high intelligence.

While Mara isn’t in Her much, her appearances are key. As in The Social Network, she is the voice of reason that critiques the childish male protagonist in a way that really gets to him because he knows she is basically right. She tells Theodore that he doesn’t know how to be in a real relationship because he doesn’t know how to collaborate. His introversion is also a kind of narcissism. His relationship with Samantha, the OS assigned to him, suggests that what he really wants is somebody less than an equal, a genie who lives in a bottle and only comes out for you, and the movie stomps on the babyishness of that fantasy. But through Catherine, we find out that Theodore has not always been the closed-off, depressed dude he is today. He used to be vibrant, able to live in the moment, at least according to flashbacks. Despite her poise and elegance, Catherine is somehow salt of the earth. Her issues originate from her perfectionist family of high achievers. Even with all her privilege, it’s easier to sympathize with Coppola when you think about her opening up to Jonze about how humiliating it was to bomb when she replaced Winona Ryder in The Godfather III.

Much of Her’s ick factor stems from how thoroughly believable it seems that dating apps and dating sims will merge, particularly if computers develop sentience. The movie ultimately champions genuine human connection over computer simulation, but like Samantha it strings you along for a while first. The OS girlfriend experience never approaches anything resembling a real relationship because Twombly isn’t ready for a real relationship; he just wants a caregiver mother type to tuck him in at night, make him feel safe and reassured, and not demand too much of him. When faced with a beautiful blind date, played by Olivia Wilde, who demands that he engage and make conversation (and possibly intercourse), he ends up shying away back into his digital cave. The movie is criticizing Twombly, but I was never sure how much we were supposed to identify with him. Introverts are not boring, but watching someone act out what it’s like to be very introverted can be kind of alienating for a movie audience.

The words “feel” and “feelings” are used by the characters in Her approximately as often as “fuck” and “fucking” are heard during The Wolf of Wall Street. Likewise, when Samantha fakes an intimate orgasm during phone sex with Theodore, consummating their relationship as best they can, it can’t be hot because it’s too goddamn sad. It’s about a relationship between a guy and a digital sex worker. How can he have fooled himself into thinking it’s real while knowing that he paid for the app? Her made me think a lot, but it never made me feel anything. For a movie about the importance of feelings, it’s still super left-brained. It’s not really a romance anyway. It’s a tragicomedy about the nuclear aftermath of a breakup, and a very dark comedy at that. Mara and Phoenix have believable chemistry as a pair, generating cold fission.

Since working with Fincher, Mara has worked with Steven Soderbergh, Jonze, and Terrence Malick. She’s obviously smart enough to work with some of the most talented people in film, and lucky enough to have gotten into a position to do so. But she’s also talented enough to back it up, and has proven that her performance as Lisbeth Salander wasn’t a fluke or a case of Fincher molding her into his perfect goth Galatea. In Soderbergh’s 2013 thriller Side Effects, Mara took over the main role, in which Soderbergh had originally cast Blake Lively. Mara’s performance is the linchpin of the movie, and uses all the colors in her palette of cool neutrals; she is creepy, magnetizing, complex, and mysterious. As her character Emily Taylor, Mara creates a portrayal that immediately calls to mind Anthony Perkins as Norman Bates. It elevates the whole movie, and what could have been a decent trashy erotic thriller becomes something eerier and more elemental, on the level of a Hitchcock movie.

She is similarly classically good in Ain’t Them Bodies Saints, which patterned itself after 1970s neo-Westerns like Malick’s Badlands and Robert Altman’s McCabe & Mrs. Miller. She’ll work with Malick himself in his upcoming project about aspiring musicians in Austin, but you never know who’ll make it to the final cut of a Malick movie. She’ll appear next in Stephen Daldry’s Trash and a Todd Haynes adaptation of Patricia Highsmith’s lesbian romance The Price of Salt, opposite Cate Blanchett. Blanchett’s career would be a great template for Mara to follow: high-profile projects and a range of roles. Mara may not have Blanchett’s chameleonic quality, but she shares her ethereality and eye for good scripts. If she continues to take a similar tack, Mara might also start getting nominated on the regs. Maybe someday Coppola might call her about making a movie in which she can clap back at Jonze in her own pretty movie with a good soundtrack.