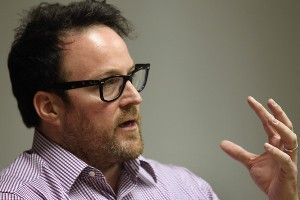 Laughs is an hourlong drama from a couple of reputable names: Oren Moverman, who’s dealt with police and military themes in his critically acclaimed movies Rampart and The Messenger, and Anthony Swofford, the former Marine who turned his experiences into the book Jarhead. According to Deadline, the protagonist of the show is “Billie Crown, an Army medic who returns from serving a tour in Afghanistan only to find that her husband is divorcing her and taking custody of their daughter. The medic hides her PTSD from family and colleagues so she can be reinstated as a Sacramento police officer, and so she can reconnect with her daughter.” Oh, and the Laughs Unlimited part? That’s a gallows-humor reference to a comedy club where Crown and her cop buddies hang out.

Between the pedigree and the premise, this thing sounds highly promising. But to make the show work, just the right actress — one who can both portray the toughness of a cop and ex-soldier and the tenderness of a loving mother; one who can be relied on to deliver in all high-pressure situations — is needed. I’m sure we’re all thinking the same thing here? HBO, get a Fanning on the phone ASAP.