There wasn’t an official theme for hometown dates this week on The Bachelorette, but unofficially it must have been The Godfather. Is it possible that the four guys were challenged to say “the family” as many times as possible? As far as we know, no Bachelorette contestant is affiliated with an organized crime network, but the way they discussed bringing Des home was as if there were some dangerous fate awaiting anyone who crossed the respective thresholds. Everyone made it out alive, though Des’s spinal alignment may be permanently altered, and we’re now down to the final three guys.

Playing Hard to Get: Brooks

This is how Brooks’s hometown date in Salt Lake City began. You may recall from last week that “running” and “skipping” are two critical junctures on the road to love. And at this point, it became clear that the producers are messing with us. Are they even here for the right reasons? Since we already know that Des loves Brooks, the only thing left to find out is if Brooks will ever love her back. It’s a twist on the typical Bachelorette narrative, because now we’re waiting on Brooks, not Des, to figure out how he feels. He has all the power. Their date began with Des presenting Brooks with an origami rose that, when unfolded, enumerated all of their good times together. If this gimmick feels familiar, it’s because Zak W. presented Desiree with a similar list of remembrances back in Barcelona, though his was illustrated. She’s stealing moves from the guys! The Bachelorette shouldn’t have to do that.

Brooks’s family was the least entertaining and the least wacky of the four. They were generally supportive. They provided the requisite deep thoughts about love. They were courteous and cordial toward Des. The fact that they were so boring suggests that the Bachelorette narrative was flipped by necessity. If Des doesn’t try to hide that she has decided on Brooks, the producers are forced into making us suspicious of Brooks’s advantage. (There is a small amount of hope for Chris, too. She says she was a little unsure of her love for Brooks after meeting Chris’s family.) Once again in her sit-down with Chris Harrison, she says she expects Brooks to propose at the end. The certainty of Brooks winning is too perfect. We viewers have to wonder what kind of heartbreak awaits us on this journey.

Chris, option no. 2, is the anti-Brooks. He has already told Des he loves her. He shows up with handpicked flowers. He cheers her on as she blows the petals off said flowers. He’s there; he’s ready to propose. If Des’s arts and crafts are any indication of her feelings, though, she’s not quite at the same place. While Brooks got an origami rose that was vaguely reminiscent of Zak’s move, Desiree gives Chris a spiral sketchbook of their history, which is exactly the same as what Zak gave her. Zak should be sad because she repurposed his move, but we all should be sad because Des misspelled “rendezvous.” 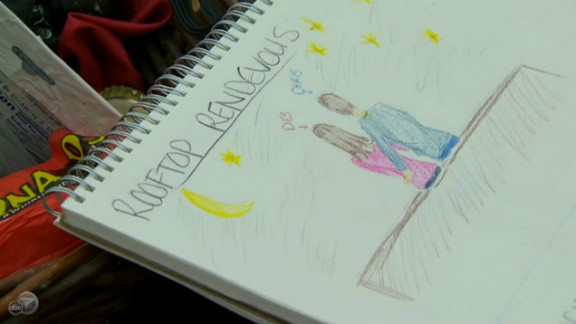 After a little baseball, they go to meet his parents. Chris’s dad is a chiropractor, so when Chris mentions that Des tweaked her back on one of their dates, the dad brings her down to his basement lair of chiropractic for an “adjustment.” He does some kind of “realignment.” You can hardly blame Des for being uncomfortable with this, but her main objection is that it’s taking away from her time to talk about her potential future husband. Shouldn’t she be more concerned with what kind of damage could be inflicted on her spine? The “adjustments” don’t end there. Chris comes down to chat with dad, and he also gets some kind of treatment. Chris says, “My dad has given me the nose adjustment for the head so many times,” as if this is a normal thing that families do, but that description sounds more like some kind of new-age treatment that has either no effect or a malignant effect. It also sounds like cult-speak. That’s a red flag, Des!

Chris’s zany father makes his family only slightly less boring than Brooks’s. For about one minute we were led to believe that Chris’s mom might not like Des and that it could be a deal-breaker. But quickly the mom is on Des’s side, and Chris tells us, “There’s no possible way that these feelings are being expressed with anyone else. It just feels too right.” Poor Chris. This won’t end well for him.

On the First Flight Back From the Caribbean: Drew

How did Drew make it so far? I don’t understand.

The date began with Drew taking Des to meet his mentally handicapped sister, Melissa. Clearly, Drew would be advancing to the next week because you can’t immediately dump someone who opens up this part of his life to you. Next, they go to his mom’s house, with the caveat that this is the first time his dad has ever been inside his mom’s house. Drew should have gone on the show sooner if that’s what it would take to get his mom and dad in the same room. I can only presume that the dad immediately felt comfortable there, because he leads a toast at the dinner table. Isn’t it rude to make a toast in someone else’s home, particularly if you are locked in a long-standing feud?

Drew shouldn’t even go to the location. He’s just going to be sent home. He was barely in the Des–Chris Harrison recap conversation, and he further jinxed himself when he declared, “Next time I see my family, I will be an engaged man.” If that’s true, Des will not be his bride.

Zak has nothing to be upset about. His rise to top four was breathtaking. He made some bizarre choices on his hometown date that may have accelerated his elimination. First he introduced Des to the snow cone truck that he apparently owns and operates, and this was his highest point. The truck is completely on-brand for Zak. His problems began when he deviated. He reprised his song from the pageant, this time performing with his siblings. Inexplicably, he didn’t sing. If it’s your date and your song, sing! Your hometown date is not the time to let others steal your shine. Ultimately, it was over for Zak when he presented Des with a pre-engagement engagement ring. Promise rings and any other preliminary rings are not a good idea. Ever. Good luck to you, Zak. We look forward to your glorious return on Bachelor Pad in 2014.