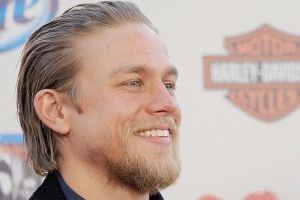 Like the marvelous Cloverfield before it, Guillermo Del Toro’s monster movie Pacific Rim (out next summer) is now rolling out a viral ad campaign that slowly and carefully reveals its beast. The flick, which Del Toro switched gears to after leaving The Hobbit, boasts a particularly tantalizing roster: Saving the world this time will be Sons of Anarchy‘s Charlie Hunnam, Stringer Bell, Babel‘s Rinko Kikuchi, and — whaaaaat? — It’s Always Sunny in Philadelphia‘s Charlie Day. And, as far as streamlined, frills-free plotting is concerned, Pacific Rim‘s head seems to be screwed on straight. As ComingSoon explains, after the Kaiju rise from the sea and start wrecking everything, “a special type of weapon [is] devised: massive robots, called Jaegers, which are controlled simultaneously by two pilots whose minds are locked in a neural bridge. But even the Jaegers are proving nearly defenseless in the face of the relentless Kaiju. On the verge of defeat, the forces defending mankind have no choice but to turn to two unlikely heroes — a washed up former pilot (Hunnam) and an untested trainee (Kikuchi) — who are teamed to drive a legendary but seemingly obsolete Jaeger from the past.”

Now, via the Pan Pacific Defense Corps website, we get choppy news footage of a Kaiju attack in San Francisco, which gives us glimpses of the dastardly sea destroyer. And even if this thing wasn’t (presumably accidentally, but who really knows) highly reminiscent of the “New York city is under attack … by swarms of killer bees” bit from the “Triumph” video, I’d still say it was worth your time.