Happy Challengetines Day! Season 25 of MTV’s The Challenge is finally here, and I couldn’t be happier.

Do you ever think about what goes into making a season of The Challenge? There’s a person who prints the names on the Under Armour gear; a person who builds the flaming The Challenge sign; a person who scouts every location months in advance; a person who puts tape over all the labels on the plastic vodka bottles; and at least a dozen security guards lurking in the shadows in case CT decides to go cannibal. We at GRTFL Headquarters just want to express our sincere appreciation for every single person involved: Thank you name printer, flaming-sign builder, location scouter, plastic vodka bottle debrander, and dudes-who-stop-CT-from-eating-people-ers. Without you we wouldn’t have The Challenge, our weekly respite from the stresses of the workplace, the pressures of living in a digital age, and the humiliations of realizing we’re too dumb to watch Game of Thrones.

The debut episode of The Challenge: Free Agents wasn’t particularly memorable or unique, but that’s what made it so perfect. It delivered exactly what we’ve come to know and love about this spectacular television program: Bananas toasting, Jasmine strutting, CT silverbacking, Frank alcopsychoholicing, and T.J. despising quitting. And while there are never truly new faces on The Challenge unless it’s a Fresh Meat season, it was nice to see some old friends back in the mix: Emilee the Hot Freckled Hooters Girl from Boston showed up; Isaac the Super-Likable Dude Who Swam Naked in the Aquarium popped up with a Mohawk; and Hurricane Nia, the One Who Doesn’t Need a Long Name Because She Is Named Hurricane Nia, came in calm (but, you know, before the storm).

As we always do when ushering in a new season of a GRTFL pillar, we made up some dumb rules so you can form your own fantasy teams at home:

• Making T.J. verbally express his disappointment in your behavior: 35 points

• Leaving the show because of injury: -50 points

• Announcing you are “in control of the game” (or something close to it): 5 points

• Slandering someone regarding sexual performance: 25 points

• Causing a vehicle with a siren to arrive: 20 points

• Misspelling a one- or two-syllable word during the spelling challenge: 25 points

• Being the target of PED accusations: 25 points

• Being the target of a Laurel rage insult attack: 15 points

• Being the target of a CT rage cannibalism attack: 75 points

The scores will be tallied on the fancy table thingy at the bottom of the column. Those will be the official scores, so pay no attention to the scores I put in the subheads: I made those up for no reason. In fact, let’s start making them up right now.

Jasmine: “I am, for the first time on The Challenge, single, and I am so trying to hook up. I want to be the whore of The Challenge, absolutely. I want dick and balls every day, all day.”

The first thing the contestants said about the house? “We have a basketball court!” Of course, the first thing Zach did was casually dunk with two hands off one foot because he’s Zach and you’re not: 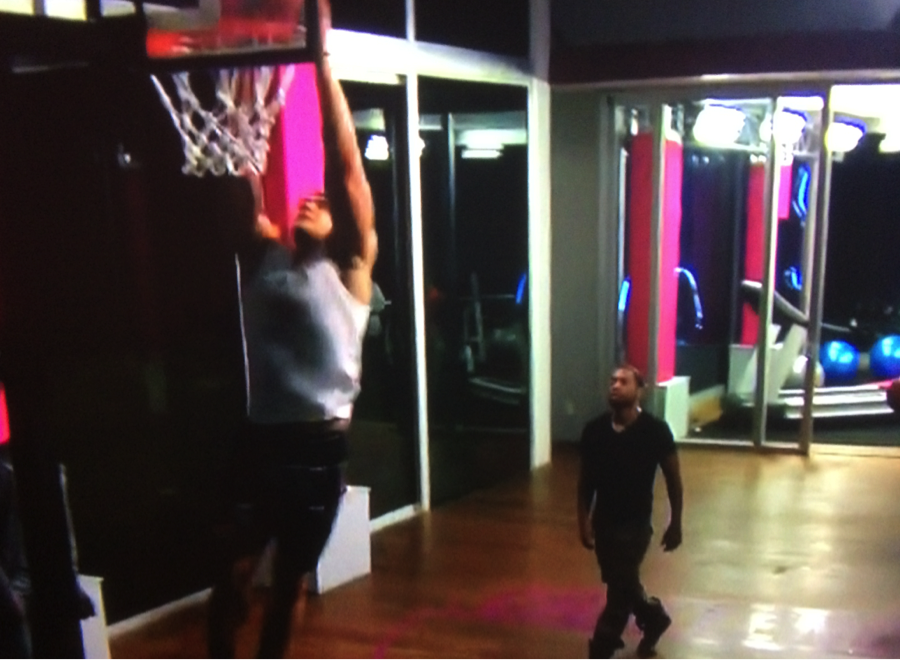 Then, all of a sudden, CT and Theresa started playing a game of strip basketball. Now, you might think the people on this show are dumb or whatever, but they came up with coed strip basketball and you didn’t, so who’s dumb now? Word around the league is that Daryl Morey took a hard look at the tape, liked Theresa’s advanced metrics, and is considering signing her to a contract to back up Patrick Beverley in the postseason. Turns out, Theresa can play. Here she is straight-up sonning CT on a drive to the basket: 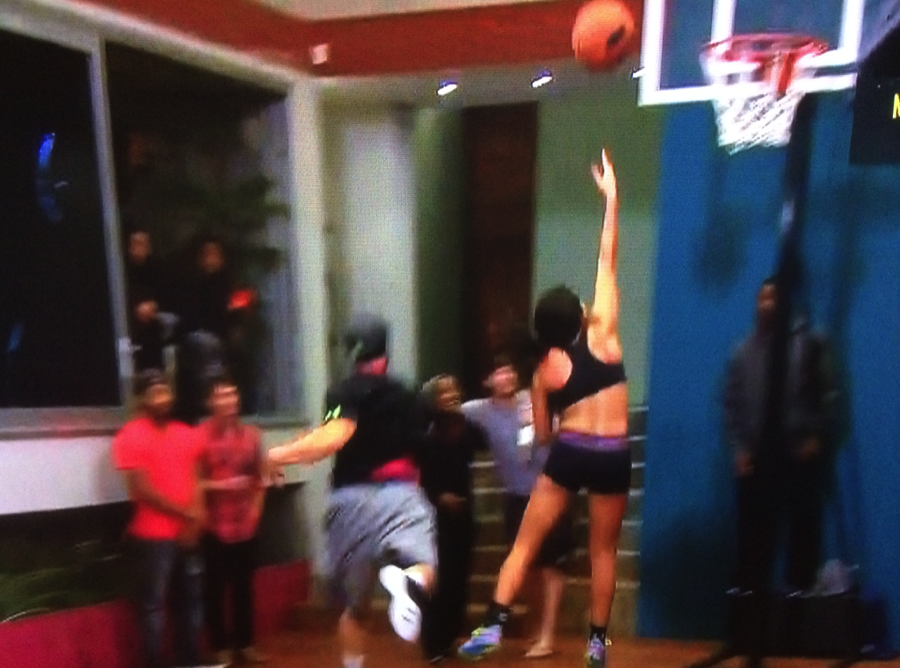 Note the form on the release, the space she created, and the way CT is so off-balance that he looks like he’s running from gunfire. I’ve said it before and I’ll say it again: There’s nothing more attractive than a chick who can play ball. Every dude’s fantasy is to go to the park with his girl, run the court for like five games, leave on a win, shower, and then see her all dolled up in a dress for dinner. Basically every dude’s fantasy is Skylar Diggins. Sure, Theresa lost by one point when CT pulled up from 30 feet, but CT never loses at anything. The only reason she scored 10 on him was because he wanted to take off his clothes.

I’m really excited about basketball becoming a part of The Challenge. It keeps people in shape, leads to a lot of fights, and is SO MUCH better than watching the contestants jog in circles around the deck like they did last season. That was the worst.

LaToya died this episode. We all saw it happen. She went up 42 flights of stairs, bumped her head on a doorframe, and drank some water, and then her eyes rolled back in her head and she died. It happened on national television. Weirdest thing. Actually, second weirdest thing, because the weirdest thing was that SHE CAME BACK FROM THE DEAD AS ZOMBIE LATOYA AND REENETERED THE HOUSE. I don’t even know how to score that.

When Zombie LaToya came back, the rest of the house didn’t know how to treat her. I mean, it was awkward; she’d died and gone off in an ambulance, and then she was back in the living room. What would you say to an animated corpse who’d grabbed a seat on the couch up in your common area?

It was so awkward that the housemates voted her into the elimination challenge in the hopes that she would lose and leave the show, but they didn’t get what they wanted. Zombie LaToya kicked Jemmye’s ass in a full contact challenge while wearing a helmet and shoulder pads. Now, I know that in the NFL you can’t compete if you’ve recently suffered a concussion, and I’m sure the rules for The Challenge aren’t any different, but clearly the producers never put anything on paper saying you can’t compete if you’re a reincarnated body animated by your lifeless soul. Poor Jemmye lost on a technicality.

This photo is the GRTFL Questionable Moment of the Week: 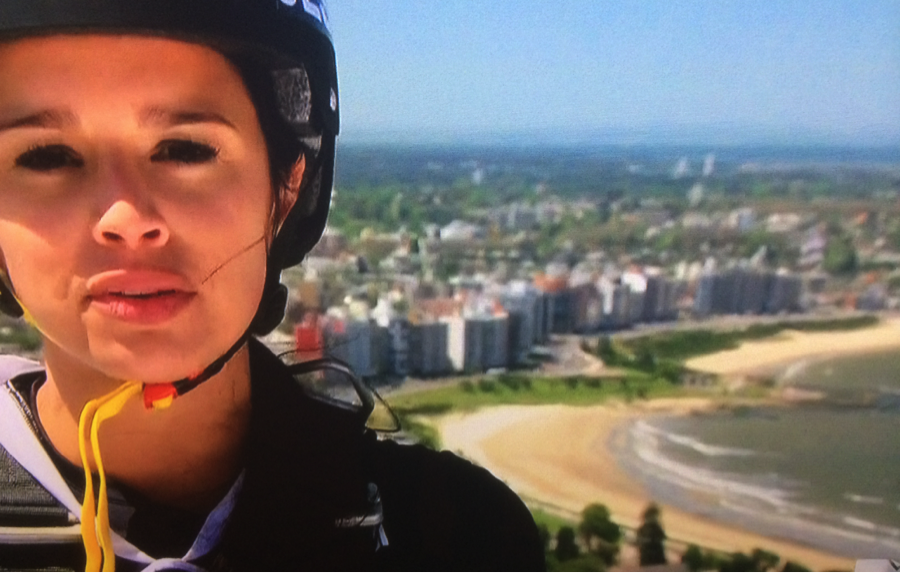 WHY IS NO ONE ON THIS BEACH?!?!?!?! LOOK HOW NICE IT IS! Seriously, it isn’t that cold, there’s a blue sky, white sand, a huge beach, and NOT A SINGLE PERSON. Note all of the surrounding residences; why don’t those people kick it on that beach? Why isn’t there a single sunbather? Is the water polluted? Are there landsharks everywhere down there? Is the sand super hot? Was there a catastrophe? Is the twist this year that the contestants are actually in a Truman Show bubble? Was MTV worried about having people seven miles away sign releases? How is it possible that with thousands of people in those towers, not one person is out for a stroll on the beach? Also, while we’re at it, why is Jessica’s chin strap two different colors? Also, also, why is Jessica even on this show?

Pop quiz, Chet. What does T.J. Lavin hate the most? No, Chet, not taking off his hat and exposing his head; he’s changed. What does T.J. Lavin REALLY hate the most? Yes, Chet, quitters. So when the Teej says to you, “All right, Chet, you can get some stiches now and forfeit, or you can just play with a Band-Aid and make it happen and get some stitches after,” YOU GET THE STITCHES AFTER. T.J. was in a medically induced coma after a nasty fall on a BMX jump, and you’re going to look at him and say you can’t compete because of a cut on your chin? You’re lucky this is the new, hatless, button-up-wearing T.J. Lavin, because the old T.J. Lavin would have let you hear about yourself. You’re also lucky he didn’t see that eyeroll shade you threw his way after getting out of his sight. Even the new T.J. Lavin wouldn’t have stood for that shit.

GRTFL Super Scorer Caitlin was on Survivor duty this week.

Survivor has gotten soft in its twilight years. Back in the old days, contestants would subsist on a diet of four grains of rice a day. Now, they get reward challenge trips to Outback Steakhouse for Bloomin’ Onions, 32 oz. sirloins, and unapologetic product placement. As Jacoby has pointed out numerous times, Naked and Afraid makes Survivor look like an extended stay at the Beverly Wilshire.

Anyway, after finishing his corporate-sponsored feast, Spencer finally made use of his napkin, which he’d ignored throughout the entire meal while stuffing his face with the aforementioned steaks and onions. And tucked inside that napkin he discovered a clue to the Hidden Immunity Idol. When the winners returned to camp, Spencer naturally went off to find the Idol. However, Woo, a student of the game, recognized what was going on and trailed Spencer using his patented “Ninja Stealth Mode.” Woo easily found Spencer, who tried to pretend he was out for a leisurely stroll while stripped down to his bathing suit, because that’s how most people dress when they’re out for a walk in a wild animal–infested jungle. “Ninja Stealth Mode” Woo didn’t buy it for a second. He saw Spencer’s clothes folded on the ground, grabbed Spencer’s pants, spotted the clue to the Idol, and hightailed it back to camp, at which point a melee Idol hunt ensued between the two alliances.

In the end, Spencer still managed to find the Idol, but if he hadn’t, it would have been one of the greatest things I’ve ever seen on Survivor. If I were a contestant, I would search people’s bags, follow them every time they took three steps away from camp, and do pretty much anything short of a full body cavity search to determine who had the Idol. Woo just became one of my favorite Survivor contestants of all time by stealing a pair of rancid khakis.

I predict that in 18 months, Woo will either be one of the greatest weapons in the U.S. military, or the Rock’s sidekick in Fast and Furious 8.

Why did you put the stones on the Tribal Council walkway so far apart?!? 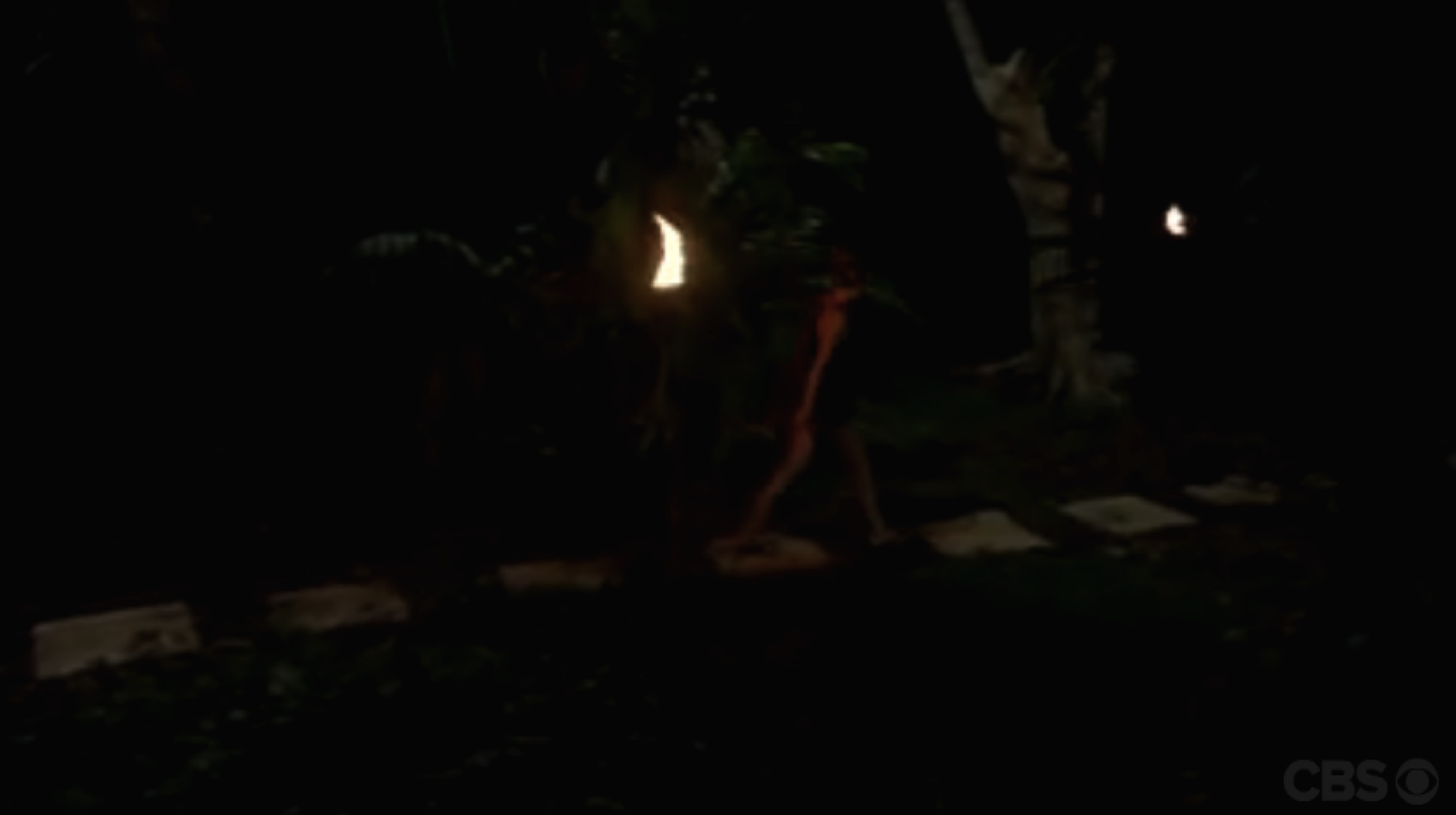 No, seriously, did you design this path for a T. rex? Even Shawn Bradley wouldn’t be able to stay off the dirt.

There’s nothing worse than when your stride doesn’t coincide with the designated path. You spend the entire time trying to determine if you should take short, awkward steps, or if you should cyborg your way through by lunging down the path.

Me again. The five greatest words in the English language, “This season on The Challenge,” provided us with so many goods to look forward to in the coming weeks that I’m closing this week’s column with this GRTFL Top Five: The Top Five Most Promising Moments From the “This Season On” Bit, listed from “Oh, they do that every season” to “Is that going to be pay-per-view, or just a regular episode?”

5. People falling off shit: They fall off bikes, they fall off cliffs, and they sure as hell fall off the wagon.

4. Nany being Nany: In one bit, she’s being held back by at least four … dozen people, but is still viciously attempting to break though to her assault target. Actually, it could be a coitus target. We’ll have to call that one when we see it.

3. “I don’t know what is going on in this house. Maybe everyone drank love potion or something.”

2. Jordan vs. Bananas: At one point, Jordan flips over every single wooden card thing to get the skull and crossbones because he knows Bananas is waiting. I kind of love Jordan.

1. I THINK I SEE SOMETHING THAT LOOKS LIKE A SPELLING BEE: 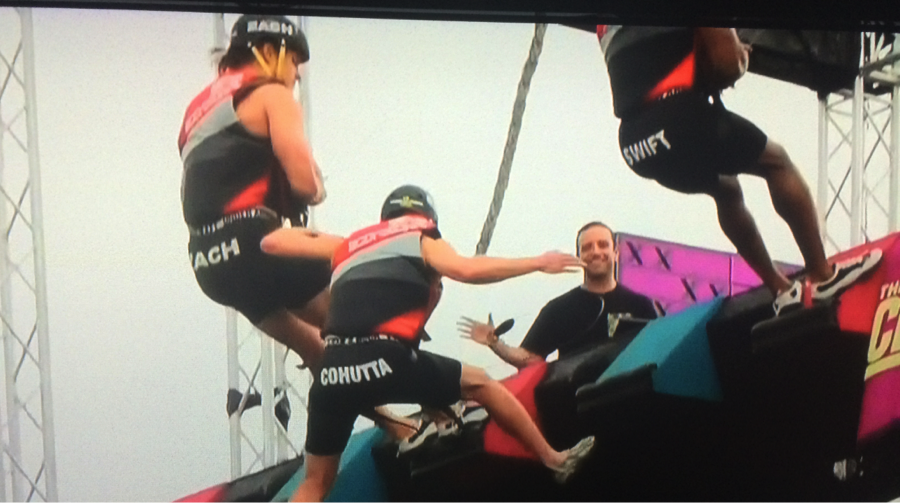 The smile on T.J.’s face puts a smile on my face. Enjoy the weekend. We’ll be back next week with more from America’s fifth major sport, THE CHALLENGE!