This week’s lowbrow TV highlights included the return of The Real Housewives of Beverly Hills, the announced return of The Osbournes, and numerous instances of questionable fashion choices from the “SURvers” on Vanderpump Rules. But before we get to all of that, I have an important question:

Did Everyone Straight-Up Stop Watching Survivor?

The ratings are fine (9.8 million people watched last week’s episode), but I recently conducted a complicated and super-scientific investigation (read: I asked five people), and it’s clear that Survivor is losing traction among a key demographic: the people I have conversations with.

My podcast partner, Juliet Litman, can list every cast member, location, and scene in Survivor history, yet she hasn’t seen a second of this season. I asked around the office, and everyone responded with “I have the whole season on my DVR, but I haven’t gotten to it yet” or “I’m a couple of episodes behind” or “Leave me the fuck alone, I’m trying to work.”

I wonder whether this reality TV titan has lost its strength and needs a shot-in-the-arm format switch à la Real World. I wouldn’t be the least bit surprised if they announced that next season will be Celebrity Survivor or Urban Survivor or Zombie Survivor. My instincts say things are heading in that direction. I seem to be one of the few people still watching this thing, and even I spend the majority of the 45 minutes lurking on the IG accounts of The Challenge cast members. Speaking of, let’s take a look at the next Challenge draft pool …

MTV seems to have pulled the trailer, but just seeing the hot-tub hookups, hair pulling, chair smashing, and booty dancing is enough to get me excited for the new season. It premieres on December 16, which sounds far away, but will be here before we know it. It’s basically 2015 already. With Christmas and New Year’s both falling on Thursdays this year, no one’s getting anything else accomplished professionally until 2015. Seriously, no one is doing any work for the next six weeks; I shouldn’t even be writing this column.

The Fashion of Vanderpump Rules

I’m sure that my passion for discussing Vanderpump Rules instead of, say, politics or charity does not reflect well on me, but I can’t fight the feeling: I love this show. Often when I talk or write about it, I’m celebrating the delusion and douche-ocity of the cast, but I’ve failed you all by not focusing my hater-lasers on what’s really important: the fashion.

This week’s GRTFL Top Five is the Top Five Most Vanderpump Fashion Choices From This Week’s Episode, listed from “That isn’t so bad” to “I hope California hurries up and floats off into the Pacific already.” 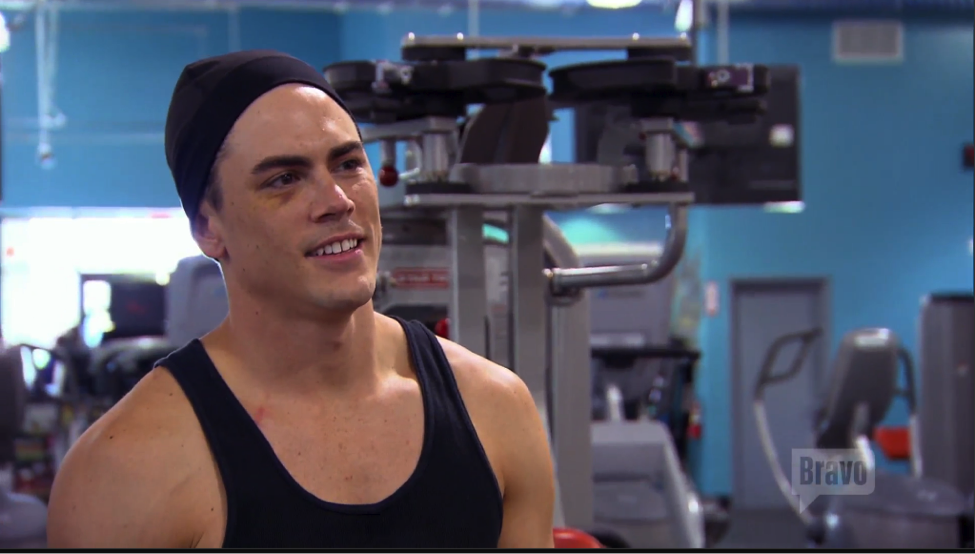 What do you do when every single day, you wear a saggy winter beanie on your head even though it hasn’t been trendy for three years and you live in Los Angeles and you’re about to go to the gym? You can’t wear a saggy winter beanie to the gym; that would be crazy. No, you wear an Under Armour–style saggy performance beanie. Bonus points for the black eye courtesy of James the English model/DJ/busboy. 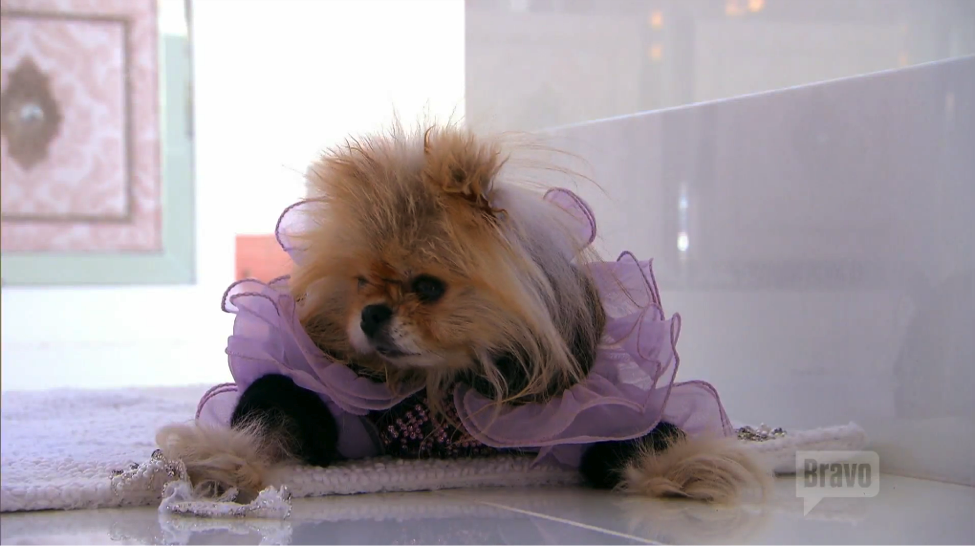 This is an actual quote from the show. No bullshit:

Lisa: “What is Giggy going to wear? What about his white suit with diamonds on it?”

Her dog has a white suit with diamonds on it. Her dog.

3. Too much too much 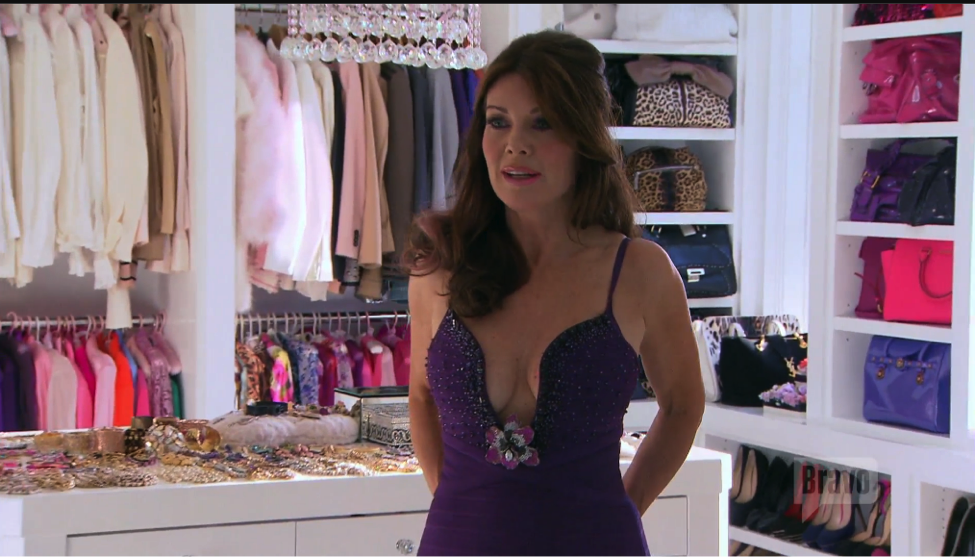 There’s a lot going on here. First off, she looks great. Lisa has a Sophia Loren–ness to her that really works. She’s certainly had some work done, but it doesn’t punch you in the face the way the other Real Housewives’ faces do.

Also, LOOK AT HER FUCKING CLOSET. What is that? It looks like the closet of a woman who has a white diamond suit for her dog. Also, her dog isn’t her only pet — WHAT’S UP SWAN KNOCKING AT THE DOOR TRYING TO GET BACK IN: 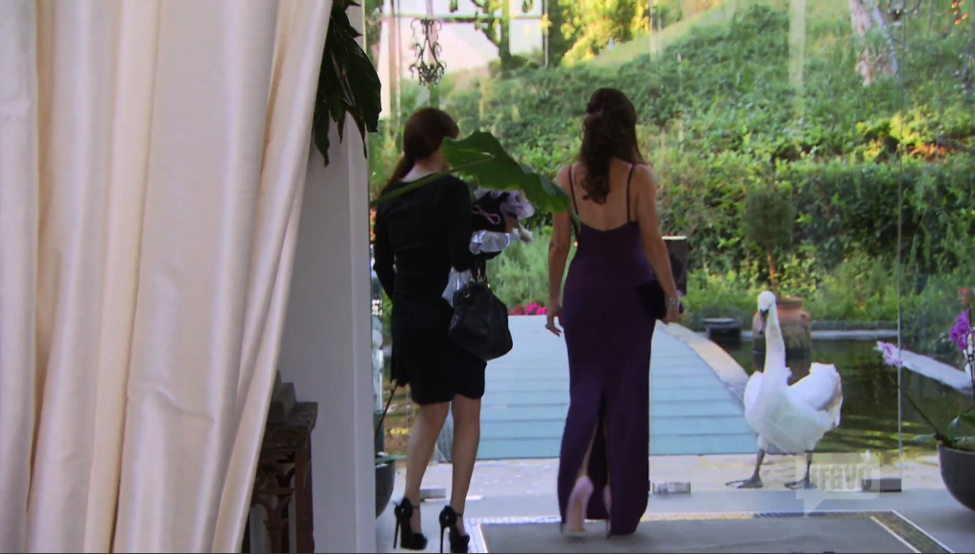 BONUS, BECAUSE STASSI: Style by Stassi 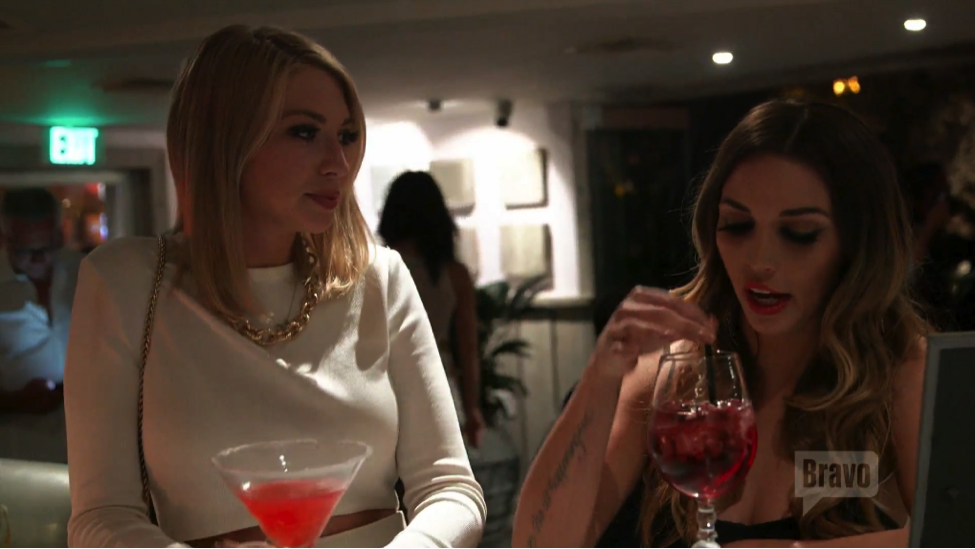 Stassi (left) is perfect. Stassi also has a blog type of thing called Style by Stassi where she gives fashion advice. She doled some out this week on the show, as well:

Kristina (in her SURver uniform): “Look at you and look at me. Why am I in this outfit?”

Stassi: “But you are really skinny, so you can wear whatever you want.”

Stassi is the opposite of an apple. 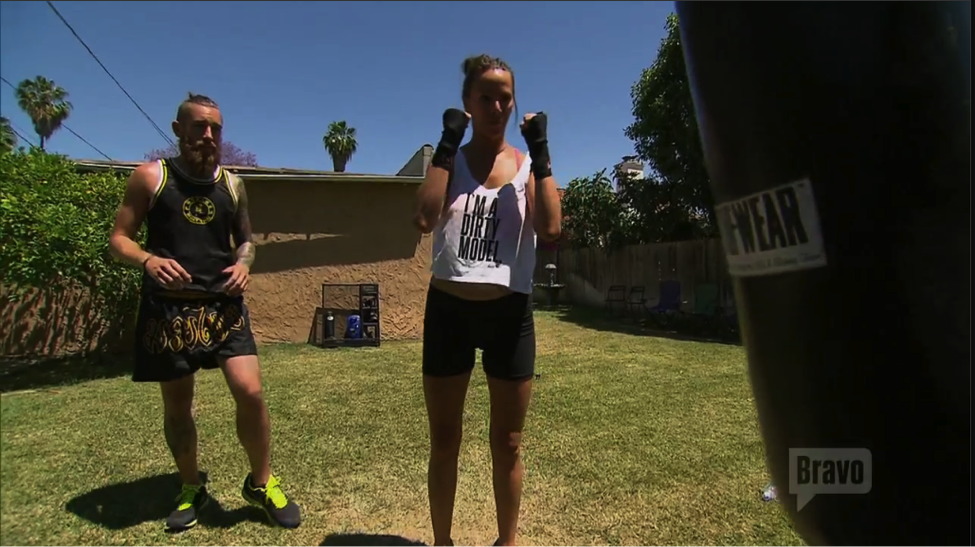 I totally understand her T-shirt selection. What else do you wear when you’re a waitress, other than an “I’m a Dirty Model” shirt? Somehow, the person with the pony tail, huge beard, neon sneakers, and Muay Thai boxing shorts isn’t the most ridiculous person in this picture.

By the way, before this workout, she did a shot of Jack Daniel’s. Because alcohol. 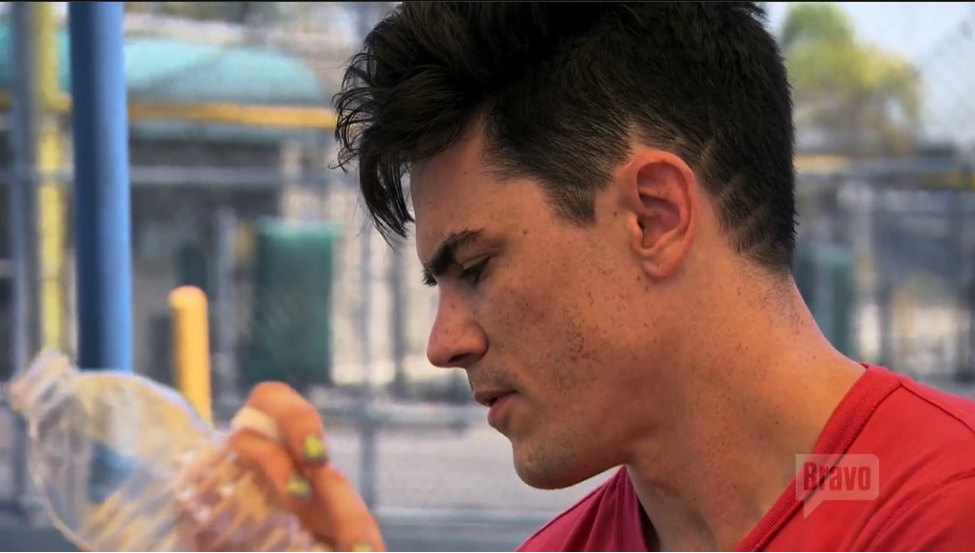 “Sir, when you cut my hair I would like you to put, like, a half dozen lines behind my left ear. Don’t even make them the same length or anything. This is going to make me so edgy.”

The Real Housewives of Beverly Hills returned this week, and I fully planned on writing a ton about it for this column, but as I watched it, a weird thing happened: It made me sad. The people on this show are just as materialistic, bitchy, dumb, and delusional as the people on Vanderpump Rules, but RHoBH has an undertone of depression and evil that I can’t shake when I watch it. When Tom gets punched in the face by James, or Jax breaks up with one of his girlfriends, the drama is “real” in the sense that it’s really happening, but it’s not “real” in the sense that there are repercussions beyond the show. No lives are truly altered at SUR, but that’s not the case on RHoBH.

This week, Kyle Richards threw her “White Party,” which she decided has surpassed the Oscars as the most star-studded annual event in Los Angeles. It’s not; it’s just another Bravo-produced excuse for the cast members to get together and argue with each other. But the current stars weren’t the only ones who arrived; so did the ghosts of Real Housewives of Beverly Hills past: 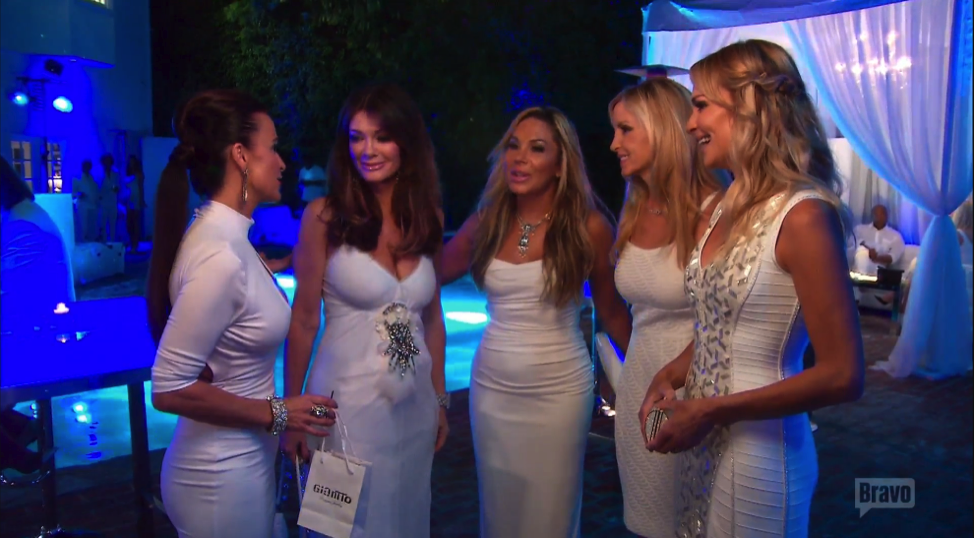 All of these people have children, families, and loved ones who were negatively affected by these events. I cannot say with a clear conscience that these occurrences are directly linked to their being on the show, but that certainly didn’t seem to help. You wonder why, after seeing what has happened to previous cast members, anyone would sign on to do this program. Enter Lisa Rinna.

When I saw the promos for the season, I asked my wife why Lisa Rinna was famous, and she immediately responded, “Because she has big fake lips.” I responded, “No, but, like, wasn’t she on a show or something? Isn’t she famous for something?” And my wife confirmed, “Nope, she’s just famous for having big lips.”

When they introduce Lisa on the show, she shares her acting background by saying that she was in Days of our Lives, Chicago, and Melrose Place, and was also on Broadway. So basically, the only reason anyone under 30 knows her is because she has big lips. Her lips are such a thing that the producers even made this her line in the opener: “You’ve heard a lot about me, but it’s only true if it comes from my lips.” That’s a dirty trick on their part, and I can’t believe she agreed to read it.

A SPIRITUALITY CLASS FOR CHILDREN!

Enjoy your Thanksgiving, listen to the Right Reasons podcast, and, as always, enjoy the shit out of your weekend.