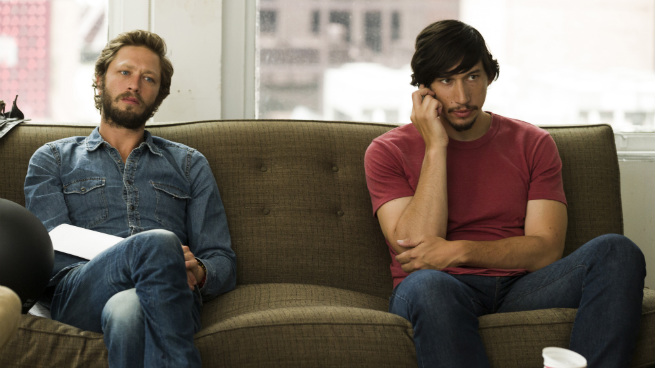 Rembert Browne is a 26-year-old Grantland staff writer living in New York City. Emily Yoshida is a 28-year-old Grantland editor living in Los Angeles. With their combined millennial thought-leader Gen Y/Project X coastal powers, they’re going to watch the third season of the HBO series Girls and e-mail each other about it.

Emily Yoshida: I want to get this off my chest right up front because it was really bugging me in the last half of last night’s episode: That hotel suite didn’t have any windows! It was super designed and claustrophobic and Kubrickian. Like, if I were trapped in there and some former bit player from One Tree Hill whipped out his guitar and started singing a Dylan/Branch folk ditty, I’d probably start stripping off the wallpaper looking for a soft spot to tunnel through.

That said, seems like a pretty cool advertorial writing gig that requires you to stay overnight in a suite at the Gramercy Park Hotel for journalism, and interview Patti LuPone at a French-ass restaurant. I also envy the monster lady cojones it would take to start talking about my life to an interview subject, and then to have the subject be fascinated and offer their insight into whatever my predicament is. Seems like Hannah really is living the dream. She and Adam are now a power couple.

But I get where you’re coming from. With that said, maybe you should — I dunno — finally pitch that Chateau Marmont story you’ve been dreaming of writing. I think it’s finally time. I know it seems like a lot is just conveniently falling into Hannah’s lap right now, but maybe it’s not luck. MAYBE IT’S HANNAH.

OK, probably not, but for a moment can you find some joy in her career advancement? Or is it so far-fetched that you refuse to acknowledge it as reality?

I will say, I’m surprised you came at her out the gate about the hotel assignment. I was sure it was going to be the first paycheck — making it rain in the office, buying a new dress — that would rub you the wrong way. But no, you went with the windowless hotel. Very odd, Yoshida.

And before you ask, yes, I do remember what I did when I got my first paycheck. I bought myself some nice groceries, and then essentially liquidated the rest of it immediately and gave it to the three people I’d been borrowing money from for the two months prior. So, not the exact same as Hannah’s move, but not that different, either. Hannah’s double-back, where she walked by the dress before coming back and buying it, was essentially the same as when I walked into Gristedes, immediately walked out, and confidently marched into Whole Foods.

What’d you spend yours on? PATTI LUPONE TICKETS?

I remember that first fancy grocery haul, though, which was maybe the fifth or sixth paycheck. I can’t even look at veggie chips anymore without feeling a little queasy; I was so excited about spending $6 on a package every other day and eating them all in one sitting on the floor of my shoe-box apartment. Oh, and prewashed-and-bagged baby spinach seemed like the ULTIMATE luxury. Hannah and I have our differences, but I can’t hate on first-paycheck bliss — it’s one of the few times nobody can blame you for spending stupid money on emotionally resonant objects/snack items.

What about your first interview/in-the-field journalistic moment? Does anyone get through that without immediately retreating to the nearest restroom and doing the Adam-paper-towel-muffle trick, except for anguished wails of self-loathing instead of triumphant screams?

Browne: I don’t know if it was the first, but the earliest I remember, especially due to the vulnerable nature of the situation, was interviewing Mystikal pretty soon after he’d been released from jail. It was one of those “I might throw up” moments, because the person I was with led me down to this windowless smoky green room, and instead of having me follow her in, she opened the door for me to walk in first. So it was 30 dudes having a four-second record-skip moment as some weirdo walked in with a notepad. But, within moments, I was fine, because I saw Bow Wow in the room, which is the ultimate sign that you have nothing to worry about anymore.

Back to Girls for a moment — I just want to say a few things about Adam. He’s wonderful. The investment I have in him versus any other character isn’t even remotely close. I want that character to figure out his life so much. I loved his bathroom screams of excitement. I loved his motorcycle ride with his new friend/castmate. I loved his unwillingness to entertain anything Elijah threw his way. And I loved his reading of lines in the bathtub. His character is written well and acted even better.

Also, SOOJIN IS BACK. I love Soojin. That’s all. Was there an episode of Bob’s Burgers last night?

Yoshida: That Soojin scene was pretty great, mostly for the Marnie-prolonged hug at the end in a wide shot. Also, 16 Handles. The last time I was in New York, I went pretty wild for 16 Handles. A serious rival to Yogurtland, and that’s saying something. I like how it feels like you’re inside a 14-year-old’s Zune when you dine in there. Also, the name: 16 Handles.

But yeah, great week for the Adams Sackler and Driver. That character is so warmly written and so particularly acted that he can’t help but feel like a real weird dude you know. They’ve really dialed back his sexual idiosyncrasies this season, too, which may help with his palatability. He has become very cute this season, which is actually welcome amidst all the other unpleasantries going on. LuPone was right, though — at least in real life, Adam would be laying waste to the dressing rooms of Broadway.

Were you surprised to see everyone hanging out again in the same room like nothing had happened? After a fight of last week’s magnitude, I feel like everyone would be taking extended breaks from each other. Maybe that’s the tragedy: Shosh knows her girlfriends treat her like garbage (they haven’t stopped treating her like garbage, P.S.), but she’s so used to it that even after confronting them, she’s still down to hang. Shosh’s life is terrible.

Browne: I completely forgot about the fight. Can’t even lie.

I feel as if the episodes are getting better. It’s nice to have plots for a change, instead the trap the show was falling into of multiple episodes in a row about nothing. Even if you’ve got beef with Hannah, she’s at least existing within an arc. We’re even seeing characters again, with Jenna Lyons and Jessica Williams returning. I just like that, six months after this season’s over, I’ll be able to talk about specific things that were very “Season 3.” If you asked me about the previous two seasons, however, it’d be something along the lines of “Well, you know, Brooklyn, amirite?”

To the first two seasons’ credit, however, that is a lot like my first three years in New York, but substitute “Brooklyn” for “3 a.m. pizza, amirite?”

Yoshida: You forgot about the fight!? IT WAS IN THE “PREVIOUSLY ON GIRLS” BIT. I didn’t even CARE about the fight, but I remembered the fight! And that is why I’ve got to disagree about the presence of an “arc” here. To me, it feels like stuff is just happening and disappearing into a windowless, hyperdesigned void. Well, you know, windowless voids, amirite? Watch, I will bet you a $20 Whole Foods gift certificate that next week we won’t hear a single thing about Adam’s flourishing Broadway career.

Browne: You’re so wrong with that. I cannot wait to get that gift certificate. It’s pretty clear Adam’s story is almost all the show has right now, so that has to continue to be a major factor. And don’t forget, Marnie gave her e-mail address to Adam’s costar by writing it on his arm. So that’d definitely going to be a thing.

I know, at this point, you’re hate-watching, but I think you love Girls. Yes, I understand, with about 634 wrong turns, you are Hannah Horvath, which is why you’ll always despise her more than I do, but you also love her. You have real feelings for her. You want her to get to her Yoshida point. She’s so far from that now, but one day maybe? Maybe Hannah becomes Yoshida. Maybe she stops being utterly loathsome and becomes an editor at Grantland. I think you want that for her. Do you? I know you do. You don’t even have to answer.

(And yes, I just wrote Grantland into the show. For the third time.)