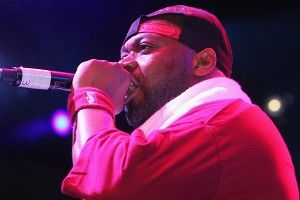 On Thursday, Ghostface Killah stopped by MTV’s RapFix Live to plug Wu-Block, the new collaborative effort from him and D-Block’s Sheek Louch, and happened to get on the topic of his recent, odd little legal skirmish. While taking fan questions over Twitter (how 2012 of you, RapFix Live!), Ghost was asked, “There are rumors that Marvel is trying to sue you over Ironman. How wack is that?”

This particular questioner didn’t quite have his facts straight, as the lawsuit isn’t over Iron Man, Ghostface’s solo debut (and also, as you might be aware, the name of a famed Marvel character), and isn’t a rumor. Last year, composer Jack Urbont filed the case, alleging that Ghostface illegally sampled “Iron Man’s Theme” — which Urbont wrote for the ’60s TV show The Marvel Super Heroes — on Supreme Clientele, his classic sophomore album. As far as we know Marvel’s not involved in the lawsuit. In fact, they seem to have a pretty good relationship with Ghost: He even had a cameo in the first Iron Man movie that, tragically, didn’t end up in the final product. (Blunting the pain of getting cut: “I got paid … ” he laughed. “I got 30Gs.”)

But responding to the question, Ghost says “That’s super wack [because] that goes back to Supreme Clientele — RZA put the skits on there and now years later, I don’t know what’s going on with Marvel, but they just tryna come at the kid, asking for 20 million … I got my lawyer in there, tryna say, ‘Yo chill out,’ tryna squash it all.” As for who, exactly, it is with Marvel that he thinks is suing him: “I think it’s an old man. I think they woke this dude up or something. He ain’t Stan Lee or anything but I guess he’s somebody because he ain’t stopping. It’s like, [why] you coming to me? Go to SONY man, don’t come at me. But that’s what it is. This, this is the game, man. Everybody out for they bread, whatever they could see, they tryna get it.”

Just woke this dude up! Now I’m picturing Jack Urbont arising from a coma, flipping through the decade of popular music that he missed, and spitting out his Honey Nut Cheerios as he hears “Tony Starks makes you feel / he’s a cool exec with a heart of steel” on the intro to Supreme Clientele. Ah, Ghostface: Even when you’re misunderstanding your own legal issues, you can’t help but sketch out wondrously rich imagery with great economy of language.