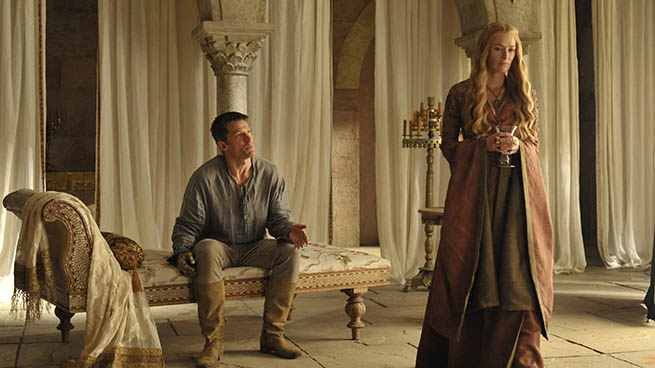 For years, a legend has traveled the Seven Kingdoms, a legend that says a dour-faced bastard of the North, a storm-born Mother of Dragons, and three powerful Lannisters (one of them donning strange future-clothes) shall sit upon the cover of Vanity Fair as photographed by Annie Leibovitz.

That day has come. And there’s an article (a “cover story”) that came with the prophecy, inside which the expiration date for HBO’s Game of Thrones is determined to be seven or eight seasons. “Last year we went out to Santa Fe for a week to sit down with [A Song of Ice and Fire author George R.R. Martin] and just talk through where things are going, because we don’t know if we are going to catch up and where exactly that would be,” says David Benioff, the show’s cocreator. “If you know the ending, then you can lay the groundwork for it. And so we want to know how everything ends. We want to be able to set things up. So we just sat down with him and literally went through every character.” Cocreator D.B. Weiss adds: “It doesn’t just keep on going because it can. I think the desire to milk more out of it is what would eventually kill it, if we gave in to that.”

Martin says he offered “broad strokes of what I intend to write, but the details aren’t there yet. I’m hopeful that I can not let them catch up with me.” The 65-year-old Martin began writing his series in 1991; in the 23 years hence, he’s published five books totaling close to 4,300 hardcover pages. By this June’s season finale, Benioff and Weiss will have adapted three of the novels (spread across four 10-hour seasons) in the span of three years. Makes sense that Martin finds the overlap factor “alarming.” And it gives Martin’s aggro sect of fans another reason to urge him to write the last two books as fast as he can.

With that in mind, let’s look ahead over these next few seasons. We should plan on eight, because no matter how big a game Weiss talks about not milking it, making money is a thing people and networks both enjoy. Also: The books are heavily compressed to work onscreen, and they could stand to be stretched without weighing anything down. So eight seasons is doable (if the kids don’t age too much, and the show should be able to handle this anyway), and worth hoping for when it’s so damned good. Thus, a half-factual, half-speculative breakdown:

A few things more things to consider: Not only do I think HBO (and maybe everyone else involved) will angle for the higher number of possible seasons, I also think it’s possible that splitting final seasons across two years (à la Mad Men and Breaking Bad) could be an even more accepted (and terrible) practice a few years from now. So let’s assume Season 8 gets halved between 2018 and 2019. That timeline makes Maisie Williams — a particular concern of Martin’s, per the VF article — something like 21 years old when the show finishes. She started the series around age 14. It’s unlikely the books will have spanned seven years, or even close to that, but the show can probably manage to fudge it one way or another. We’ll say there’s no problem here, even if the show ends in 2019.

Now, on to Martin. Even if he outlined the show for Benioff and Weiss so they can map things out accordingly, and — sorry to be grim, but c’mon, this is Westeros — even if Martin lives to complete his saga, what years will those novels hit shelves? Martin busted out the first three books with only two-year wait times in between. Then five years passed before the next book, and six years before the one after that, which came in 2011. Let’s avoid morbidity and not assume he keeps taking longer for each book, which would put A Dream of Spring on shelves no earlier than 2026, just in time for Martin’s 78th birthday. But if Martin is really writing the final two novels “a little faster” and manages to publish them both within four or five years — he’s done it before, in the ’90s! — then HBO’s Game of Thrones would conclude tidily and simultaneously along with ASOIAF. Otherwise: Hold on to your butts, ’cause we’ll be in totally uncharted, what-if-they-finished-the-world-popular–Harry Potter–movies-before-the-world-popular–Harry Potter–books territory.

(Or, if we’re going real brash, Benioff and Weiss could drastically alter the plot and have things skid to a glorious ending that aligns more closely with the fifth book. That could be tremendous.)