In the small hours of February 9 — 1:30 a.m. ET to be exact — something very strange occurred. As the world slept or caught up on their DVRs or watched replays of The Walking Dead, FXX aired a pilot — titled Winter Dragon — for an apparent series based on the beloved collection of 14 fantasy novels known together as The Wheel of Time. It starred the inimitable Billy Zane. There was no pre-debut buzz, there were no preshow stories by television writers, no fanfare, no engagement with the vast mass of fans of the WoT series, nothing of any kind that would possibly draw viewers to the fledgling show save for a cable guide blurb: “Victorious in a 10 year war against an army of Darkness, a weary Lews Therin returns home to his family to discover an unexpected guest.” 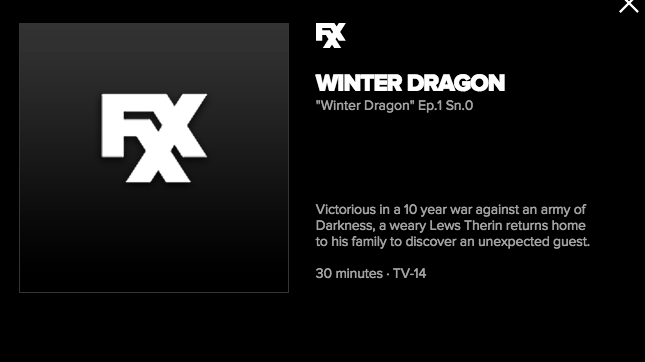 Actually, it was more like a several-thousand-year war. But this is the least of the gripes one could proffer about the pilot.

The cable listing was noticed by fans of the book series, who quickly relayed the news on Reddit and some Wheel of Time forums before tuning in to find out just what in the hell was going on. Was this a good-faith effort to finally get a Wheel of Time television series on the air? And if so, why was it airing with no promotion and in the middle of the night like a burglar casing a score?

Good question! Short answer: Actually, there is no short answer. Please, read on.

The Eye of the World, the first novel in the WoT series, initially published in 1990, was written by epic-fantasy author Robert Jordan. The Eye of the World introduces readers to Lews Therin and the events of his death (which in turn created the mountain known as Dragonmount), the Andorian village of Emond’s Field, the protagonists therein, and the basic mythic lore involving magic, telepathy, the eternal evil known as “The Dark One” or “Shai’tan,” and the great seven-spoked wheel of time that governs the ages — and those who can access the male/female power that flows from it.

The series expanded and there followed 10 novels at a relatively regular pace over the next 15 years. By Book 11 — Knife of Dreams, published in 2005 — the end of this epic tale seemed no closer to being realized than it was in any of the previous books. Then, in the spring of 2006, Jordan wrote an open letter in the sci-fi/fantasy magazine Locus announcing he had been diagnosed with amyloidosis, a rare blood disease with no known cure. Despite the obvious gravity of the subject — he wrote that his diagnosis came with a “median life expectancy” of about four years — Jordan remained upbeat and inspiring:

In any case, I intend to live considerably longer than that. Everybody knows or has heard of someone who was told they had five years to live, only that was twenty years ago and here the guy is, still around and kicking. I mean to beat him. I sat down and figured out how long it would take me to write all of the books I currently have in mind, without adding anything new and without trying to rush anything. The figure I came up with was thirty years. Now, I’m fifty-seven, so anyone my age hoping for another thirty years is asking for a fair bit, but I don’t care. That is my minimum goal. I am going to finish those books, all of them, and that is that.

Alas, it was not to be, and Jordan died in September 2007. Harriet McDougal, his widow, selected fantasy writer and Wheel of Time fan Brandon Sanderson to finish the story, giving him access to her late husband’s story notes. Sanderson wrote the final three books,1 which culminated, to much acclaim from the series’ fans, in 2013’s A Memory of Light.

OK. So, you’re probably thinking: Hmm, a multi-novel fantasy epic with countless characters, a complicated magic-based lore, and an expanding story line that had no clear ending when the author tragically died … so, it’s like A Song of Ice and Fire? Stop. Right. There. It’s an understandable mistake, but do not say that out loud, lest you be hacked to death by the ardent fans of either series. The best corollary I can think of, or at least the most digestible, is to say that The Wheel of Time is as different from A Song of Ice and Fire as Star Wars is from Star Trek, and its fans are just as passionate.

That said, Game of Thrones is a gangbusting television phenomenon, and its runaway success shows that high fantasy literature can find an audience on television. It just makes sense that, in the wake of GoT’s massive popularity, someone would look to make a show based on The Wheel of Time. Both series are landmarks in modern fantasy, both are best sellers, and both have dedicated fan communities who are more than eager to jump across the media divide, provided the showrunners display the requisite respect for the source material.

Which brings us to a winding road leading to a stealth pilot aired on a Monday night at 1:30 a.m. in the barren basic cable hinterlands.

The media rights to WoT are held by Red Eagle Entertainment, which purchased them from Jordan in the 2000s. Since then, REE has largely failed in its mission to get the property adapted in film, television, comics, or video-game form, much to the consternation of the series’ many fans. Jordan himself railed against REE’s mishandling of his works barely a month before his death:

I hear that word was floating about ComicsCon [sic] in San Diego that I am displeased with Red Eagle. Too true. Too very true. In a few more months that last contract they have with anyone on God’s green earth that so much as mentions my name will come to an end and we can see what happens after that. You see, among other things they forgot an old dictum of LBJ back when he was just a Congressman from Texas, when he famously, or infamously, said “Don’t spit in the soup, boys. We all have to eat.”

In 2008, Red Eagle Entertainment sold the television rights for WoT to Universal for a seven-figure sum. The structure of the deal allowed Universal to make a show based on Jordan’s books, with the stipulation that if a show had not materialized by a certain date, the rights would revert back to the Jordan estate. That certain date is February 11, 2015, also known as “this Wednesday.”

Clearly, the stealth pilot was made with the intention of preventing the return of the media rights. The pilot features title-card graphics that look like cut scenes from an original PlayStation game. Much of the action — which mainly consists of Lews Therin saying “Ilyena” 20 times — takes place in a single room.2 The production values, in other words, scream “RUSH JOB.”

Though to be fair, the plot does somewhat accurately represent events of the prologue of the first book of the series.

The Twitter feed of the director, James Seda, who tragically died days ago from injuries sustained in a car accident,3 confirms that the project was rolled forward with uncommon haste. Based on Seda’s tweets, it appears that the entire project, from preproduction (location scouting, casting, costumes, script) to principal photography (which, according to Seda’s feed, included 22 scripted pages filmed IN A SINGLE DAY) to postproduction (sound, special effects) was completed in something like two weeks (!!!!!), from January 15 to February 4, for an airdate five days later. This is like doing a term paper in 45 minutes.

Reading the tweets casts an eerie pall over the whole affair. Seda was clearly thrilled to be working on his first real production. Just awful.

In an interview with io9’s Charlie Jane Anders, Red Eagle Entertainment CEO Rick Selvage essentially confirmed without confirming that the stealth pilot was about retaining the rights, saying, “it was more of an [issue of] getting it on the air.” It’s unclear what involvement Universal — ostensibly the television rights holder — had in the pilot.

The following is a statement from Harriet McDougal Rigney, Robert Jordan’s wife and editor, regarding the FXX show The Wheel of Time: Winter Dragon that aired last night:

“This morning brought startling news. A “pilot” for a Wheel of Time series, the “pilot” being called Winter Dragon, had appeared at 1:30 in the morning, East Coast time, on FXX TV, a channel somewhere in the 700s (founded to concentrate on comedy, according to the Washington Post).

It was made without my knowledge or cooperation. I never saw the script. No one associated with Bandersnatch Group, the successor-in-interest to James O. Rigney, was aware of this.

Bandersnatch has an existing contract with Universal Pictures that grants television rights to them until this Wednesday, February 11 – at which point these rights revert to Bandersnatch.

I see no mention of Universal in the “pilot.” Nor, I repeat, was Bandersnatch, or Robert Jordan’s estate, informed of this in any way.

I am dumbfounded by this occurrence, and am taking steps to prevent its reoccurrence.”

So, what happens now? Who knows. But, the tale of The Wheel of Time’s media rights is now at least as twisting and epic as the story itself.