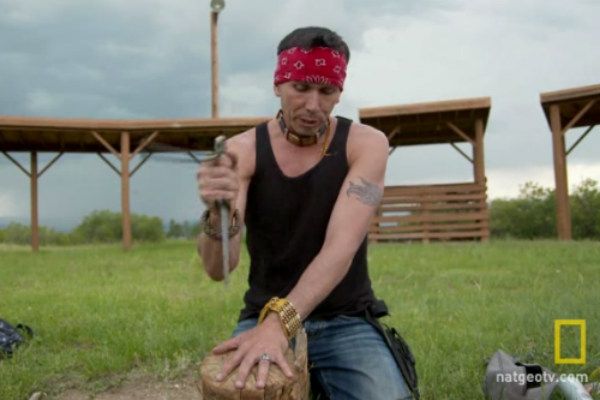 Who Is This Now? Snake Blocker.
Why Are We Watching Him? He’s showing off his survival skills and trying to teach some to his new wife, Melissa.
How Did He Get Here? He believes that the U.S. is facing imminent economic collapse, and that, thereafter, he and Melissa will have to live off the land.
What’s the Grossest Thing We See? First, Snake tries to reassure Melissa that they won’t starve in the mountains even if he can’t find game to hunt, and proves it by eating live ants and a wasp larva. Later, he does find a rabbit, which he shoots, with an arrow, through the head. Then he picks up the rabbit and carries it around with the arrow, which he leaves stuck in the rabbit’s head.
What Have We Learned? Melissa may have made a huge mistake.

Who Is This Now? Michael and Shantelle.
Why Are We Watching Them? They’re telling the story of battling bees in a house they rented.
How Did They Get Here? They think that bees are getting inside the house via a large hole in the exterior wall. But they’re wrong: There are, in fact, massive honeybee colonies inside the walls of the house.
What’s the Grossest Thing We See? When a specialist exterminator quotes $350 to sedate the bees and get them out of the house, Shantelle and Michael’s landlord decides to deal with the problem himself, and shows up with a can of pesticide. The poison triggers the bees’ danger pheromone, and they go crazy, basically blotting out the sun with their swarms. (Did I mention that Shantelle has a deadly bee-sting allergy? She does.) This seems to address the problem, until a week later the couple sees what seems to be spilled rice all over the kitchen floor … but is actually hive beetle larvae that survived the pesticide attack. And the couple’s adorable toddler almost eats one.
What Have We Learned? If you’re going to rent a home, try to find a landlord who isn’t an idiot.

Who Is This Now? Merlene.
Why Are We Watching Her? After neighbors complained about the disordered state of her property as a result of her hoarding, she’s been forced to clean up to avoid a ruling by the local health inspector.
How Did She Get Here? After divorcing her cheating husband, Merlene became depressed, and self-medicated by shopping and collecting things. Cut to: a kitchen waist-deep with garbage.
What’s the Grossest Thing We See? I can grudgingly tolerate appalling California-isms like the wall of vitamins and supplements that are left sorted and organized after Merlene’s house gets cleaned up, and Merlene’s description of her early relationship with David, her ex: “The vibrations between us was [sic] palpable.” What I cannot tolerate is that the show’s producers make professional organizer/fairy godmother Dorothy Breininger hang out with Merlene while she sifts through a public recycling bin and cook dinner in her fire trap of a kitchen. They are putting Dorothy’s life at risk to stage this phony-baloney scene!
What Have We Learned? If anything happens to Dorothy, I will march on A&E.

Who Is This Now? Ashley.
Why Are We Watching Her? She’s a teen in trouble, and her mother, Maureen, is at the end of her rope.
How Did She Get Here? She uses and sells meth; she’s also addicted to heroin, and has, by her own estimation, ODed 20 times since first trying meth in middle school. The causes of her addiction are attributed to (a) her having been abandoned by her father in early childhood, and (b) an early professional singing career, which she gave up at age 14, leading to boredom and aimlessness, and thence to drugs.
What’s the Grossest Thing We See? In a “Scared Straight” confrontation, recovering addict Tiffany shows Ashley some mementos of her time as a drug user: her disgusting old fingernails, which, at one of her lowest points, peeled off one by one.
What Have We Learned? OK, OK, I’ll never do drugs!

Tara Ariano (@taraariano) would rather die in an apocalypse than be married to a bow hunter.