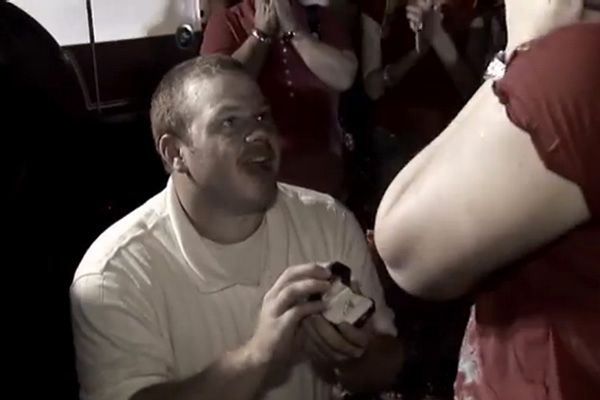 Who Is This Now? Tammy.
Why Are We Watching Her? Mere hours before she (along with every other woman age 18 and over) is to leave her town of Yemassee, South Carolina for a week, she’s just heard that her son Justin is about to propose marriage to his girlfriend, Amy.
How Did She Get Here? She coddled the hell out of Justin, and now she can’t handle the idea of another woman replacing her in his life.
What’s the Grossest Thing We See? “My relationship with Justin is beyond a mother and a son,” says Tammy. “I do everything for him except I don’t wash him. If he wanted me to, that might be another story.” When Justin does propose (and Amy accepts), Tammy says, “I feel like my whole world has been taken from me.”
What Have We Learned? For Tammy to spend a week away from Justin is a good start. A few months might be even better.
http://c.brightcove.com/services/viewer/federated_f9?isVid=1&isUI=1

Who Is This Now? Ari.
Why Are We Watching Her? She’s getting ready for a house party with the help of her daughter’s nanny, Amber.
How Did She Get Here? She got enormous breast implants, dyed her hair platinum blonde, and married a wealthy older man, so now she can pay for someone to come help her raise her child even though she doesn’t have a job.
What’s the Grossest Thing We See? After criticizing the outfit that nanny Amanda’s brought to wear at the cocktail party later, Ari offers to lend Amanda a dress, and as she’s zipping it up for Amanda to try, she comments, “Oh, you’ve got a fuzzy back. It’s cute.” Later, at the (lavish) party, she sits on her new husband’s lap and simpers, “Santa, I want one Bentley … and a yacht. And that’s not asking a lot.” This after she cried poverty to Amber in last week’s episode and convinced her to take a pay cut.
What Have We Learned? Amber’s decision to leave Ari’s employ is almost certainly the right call.

Who Is This Now? Brendan.
Why Are We Watching Him? He’s sought the aid of matchmaker Lori Zaslow to find him a girlfriend.
How Did He Get Here? He’s a comic, he’s 27, and he’s broke — none of which are attributes of the typical male client of a matchmaking service — so I’m assuming he’s friends with someone at Bravo who thought it might be good for the show to branch out from its usual roster of cocky thirtysomething “entrepreneurs.”
What’s the Grossest Thing We See? When Lori takes him out to girl-watch at a park to get a sense of his physical type, Brendan dismisses one woman (whose face we fully see, by the way) by saying, “She’s cute, but she’s really gettin’ after that sandwich.”
What Have We Learned? Financial success is not a prerequisite for a dude to be overconfident about his dating prospects.

Who Is This Now? Kathy.
Why Are We Watching Her? She’s a hoarder whose son, C.J., moved out when he was 12 because of the state of her home. Five years later, she believes that if she can clean up the home, he might move back in with her.
How Did She Get Here? She attributes her hoarding to the fact that she tends to “overbuy.” (Once psychologist Julie Pike shows up, we also hear more about Kathy’s abusive childhood and the resentment about it that she still bears against her mother/next-door neighbor Lois.)
What’s the Grossest Thing We See? Let’s pour out a 40 of murky, mysterious liquid for Caleb, the hauler who’s assigned to clean out Kathy’s fridge without the benefit of gloves or a mask. Whatever he finds within is so revolting that it makes his eyes burn and his hands tremble, as he and everyone else in the kitchen retches.
What Have We Learned? Store clerks, like bartenders, should be allowed to kick patrons out when it looks like they’ve had enough.

Tara Ariano is apparently lucky to have found love despite her willingness to eat sandwiches in public.