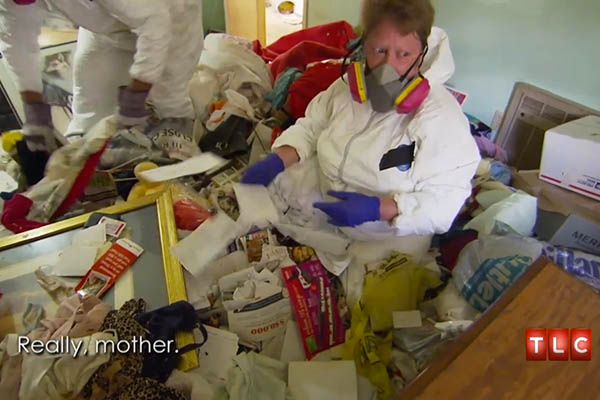 Who Is This Now? Siblings Jimmy, Cheryl, and Aimee.

Why Are We Watching Them? They have come together after their mother Cynthia’s death to clean out the hoarded house she shared with Jimmy.

How Did They Get Here? During Cheryl and Aimee’s childhood, Cynthia was an abusive alcoholic. By the time Jimmy came onto the scene, many years later, Cynthia had stopped drinking — but “[s]he kind of traded off her addictions,” according to Jimmy, becoming a compulsive shopper and a hoarder.

What’s the Grossest Thing We See? Evidence of severe rat infestation? Dust like Spanish moss on the slats of a closet door? Crusty brown gunk on surfaces that should be clean white, like the toilet and the inside of the freezer? Check, check, double check — nothing we haven’t seen before. The most appalling thing in the episode, though, is the arrival of Moriah Rhame, a medium. Cynthia had told all three kids many times during her life that she owned the house outright, and that she wanted it to go to Jimmy after she died. But in the chaos of the hoard, no one knows where Cynthia may have put the paperwork to prove it. So the siblings (really mostly Aimee and Cheryl, it seems) believe that Moriah will be able to communicate with Cynthia, and act as an intermediary so that Cynthia can tell them where to find this alleged paperwork. And oh my god, the cold-reading con job Moriah pulls on these poor, grieving people. Like, I don’t think you need to have psychic powers to come to a hoarded house and declare that you feel “the pain of the children.” Anyway, after directing Cheryl to look in a particular room, pointing to several different boxes full of old bills and the like, finally Moriah — I mean CHERYL — admits that the paperwork actually isn’t in the house after all.

What Have We Learned? Two direct quotes from participants in the episode tell us everything we need to know.

Why Are We Watching Her? She’s telling us about her unusual habit: eating deodorant.

How Did She Get Here? She never really explains what possessed her to try eating deodorant in the first place. A dare? I’m going to guess it was a dare.

What’s the Grossest Thing We See? It’s no fun watching Nicole use the cap of a deodorant stick to scoop off chunks of deodorant and dump it down her throat. But it’s even worse when she tells us that she actually prefers aerosol deodorant — “The residue doesn’t get stuck on my teeth” — and we see her spray some into her mouth, because there is something badly wrong with her tongue. Why is it covered in brownish-yellow bumps?!

What Have We Learned? Because the active ingredient in most deodorants is aluminum, consuming it orally can cause neurological problems; Nicole, at age 19, has already experienced memory loss. (It’s apparently not great to spray or smear it onto your skin every day, but it’s that or smell awful, so what are you gonna do.) But more importantly, if you eat it, you will evidently make your tongue look like the floor of a movie theater.

Who Is This Now? The Wells Family.

Why Are We Watching Them? They’ve gotten in touch with child-care expert Deborah Tillman to help sort out some of the problems in their household.

How Did They Get Here? They have seven children. “Wait, you already covered this episode last week!” I know why you would think that, but this is a DIFFERENT family with seven DIFFERENT awful children. It’s almost like seven children is more than two normal working parents can reasonably handle!

What’s the Grossest Thing We See? Wells matriarch Keena spends a lot of time getting scolded by Deborah for ducking out on activities to check in on work, getting on conference calls and, in one instance when she’s too late to join the call, just hanging out in her bedroom alone to take a break from trying to heal the problems with her family. But while Keena is checked out in general, Keena’s relationship with her oldest child, 17-year-old daughter Carleisha, is the toughest to watch. Carleisha spends most of her time holed up in her bedroom to avoid the nonstop ear-splitting shrieks of her siblings. Deborah asks Keena and Carleisha to participate in an exercise during which Carleisha has to answer the question of when she last felt loved by her mother. “Last year, I guess, when I was sick?” says Carleisha. Later, after Deborah has left the family to fend for themselves for a while, we see footage of Carleisha asking Keena to get involved in her life by attending her sporting events. “I have to be at the games?” whines Keena. “You know I don’t like sitting outside.”

What Have We Learned? Keena might not actually want to be a parent?

Tara Ariano feels the pain of her readers.