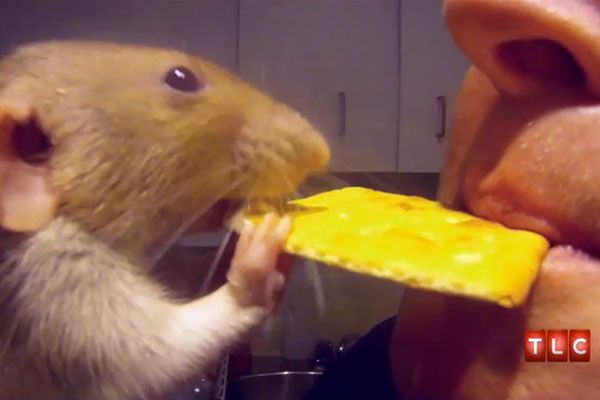 Who Is This Now? Chantal.

Why Are We Watching Her? She’s telling us about her obsession: her 19 pet rats.

How Did She Get Here? “When you find your purpose in life, you know it,” says Chantal, “and that was what happened to me, when I saw that first rat.” OK.

What’s the Grossest Thing We See? Blossom, a hairless rat, has a huge tumor on her chest, which Chantal gets treated with surgery. (She’s spent more than $10,000 on medical care for her rats over the years.) And though we don’t see the surgery, when Chantal handles her afterward we see a large, open wound (I won’t say it’s definitely a rat bite, but that’s certainly what it looks like) on Chantal’s finger. Chantal, have rats if you want — you’re not hurting anyone (except Blossom, who dies in the parking lot at the vet clinic immediately following her surgery). But if you get a wound on your hand and you’re going to handle your rats, please cover that wound.

What Have We Learned? Fear of death by bubonic plague is more of an issue for some people than others.

Who Is This Now? Anna.

Why Are We Watching Her? She’s getting ready to tell her in-laws some big news.

How Did She Get Here? She married Josh Duggar, the eldest of Michelle and Jim Bob Duggar’s 19 children, and thus became a reality-TV star.

What’s the Grossest Thing We See? Anna invites all the Duggars over for what she tells them is a theme dinner, and serves a selection of miniature foods — cherry tomatoes, sliders, pigs in a blanket, baby carrots, etc. The menu is meant to hint at Josh and Anna’s news: They’re expecting again! All of that is fine, so I’m not sure why Anna decided that the capper for the dinner should be mini Baby Ruths rolled up into real diapers. GET IT?!

What Have We Learned? The Duggars are so frequently late that they call it “Duggar Time.” So there are still people who think being inconsiderate is excusable if they give it a “cute” name.

Why Are We Watching Her? She’s run afoul of one of her father’s employees.

How Did She Get Here? Taylor’s father, Ken, is a church pastor, so Lifetime has featured her in a show with the premise that the children of clergymen and -women face unique challenges (by which I mean “are extra bad”).

What’s the Grossest Thing We See? To be fair to PD producers, Taylor is the wildest of the three featured Daughters, sneaking out to parties, lying about her friends and her social life, and the like. But when Taylor actually does something respectable and altruistic by helping out at a clothing drive at her father’s church, and dares to goof around dancing with some of her friends, Ken’s secretary Edna has to anoint herself Taylor’s substitute parent and scold her in front of the whole room. Later, Edna tattles on Taylor to Ken — which is logical since, as Ken approvingly says, Edna is “like a spy.”

What Have We Learned? Dana Carvey’s nosy, judgmental Church Lady apparently wasn’t as much of a caricature as I thought. Mind your own business, Edna!

Who Is This Now? Joanne.

Why Are We Watching Her? She’s under a lot of legal pressure to clean out her home.

How Did She Get Here? According to Joanne, she’s not a hoarder; collecting “treasures” from Dumpsters is just a hobby, like golfing or (a better analogy) drinking is for some other people. But she’s been incarcerated four times (for a total of around 30 days) for hoarding-related code violations, and now, having hoarded up her home again, she’s in violation of her probation and urgently needs to clean the house.

What’s the Grossest Thing We See? Among the “treasures” Joanne has created are a gallon of (presumably) expired milk that she leaves unrefrigerated in the middle of her living room floor and from which we see her drink; a black, burst-open can discovered in the kitchen by one of the haulers; and a can of cream gravy that therapist Dr. Christina Noble notes expired in March 2006. Would Joanne feel comfortable throwing it out? At first, Joanne says yes; then she says she would open it and give it a quick taste to make sure it’s OK before committing to consuming the whole can. (Fortunately, she does not get the chance to do this, as Dr. Noble takes the can out of her hands and disposes of it.)

What Have We Learned? Some of that canned food the Doomsday Preppers subjects are collecting isn’t actually going to be OK to eat after the apocalypse.

Why Are We Watching Her? She’s telling us about her terrible tattoo.

How Did She Get Here? She got a tattoo as a tribute to her boyfriend, but possibly didn’t think it through.

What’s the Grossest Thing We See? Well, it’s the tattoo: Since her boyfriend’s nickname (for reasons that are never explained) is “Frankenuts,” Emily’s tattoo is of the artist’s best approximation of Frankenstein’s monster’s scrotum — green, sewn together in the middle, and with a couple of bolts seemingly securing the image onto her butt.

What Have We Learned? Love can really be disgusting.

Watch the full episode here (the “Frankenuts” bit starts at around 10:29).

Tara Ariano may judge teenagers, but she’s no narc.