Vampires may be immortal, but they still have a life cycle of sorts. The last few years have seen a glut of vampire movies in the wake of Twilight’s huge success, but ever since the silent 1922 classic Nosferatu, there have always been plenty of films about the living undead. The most recent addition to the genre is Vampire Academy, a mishmash of teen film and TV trends from the last decade. It’s a fantasy about going to a fancy rich-people school, just like Gossip Girl. But the eponymous academy, St. Vladimir’s, is not just any ritzy private institution — it’s a supernatural boarding school, just like Hogwarts in the Harry Potter books and films. There are no wizards, only vampires, and the vampires are embroiled in an internal civil war, just like in Twilight. The civil war is complicated enough that much of the movie’s dialogue is just poorly disguised exposition about the differences and distinctions among vamp tribes. There are the Dhampirs, half-human, half-vamp hybrids similar to Harry Potter’s half-bloods; the evil, super-strong Strigoi; and the Moroi, who are extremely beautiful and pale, with alchemical magical powers — the royals of the vampire world. They look and behave an awful lot like the Cullens, Twilight’s central family of Pacific Northwest–based mystical hotties. While Twilight took place in the gloomy rain-soaked town of Forks, Washington, St. Vladimir’s is in a gloomy, rain-soaked Montana forest, although much of the student body is inexplicably British.

Vampire Academy is indisputably bad, but it’s hard to place the blame on the brother team of director Mark and screenwriter Daniel Waters. Mark Waters is best known for directing Mean Girls and Freaky Friday, the former a masterpiece and the latter a very pleasant movie to watch a million times on cable. Daniel Waters is most famous for writing the cult-classic hat trick Heathers, Batman Returns, and Demolition Man, although he was also responsible for notorious flop Hudson Hawk. The Waters brothers have the kind of IMDb pedigree that should theoretically make them no-brainers for a dark comedy about teenage vampires trapped in a permanent high school setting. The problems stem mostly from the source material, a series of young adult books by Richelle Mead. Mead is a bestselling author in the micro-genre known as urban fantasy, which blends magic elements with a contemporary semi-naturalistic setting. Vampire Academy has to spend so much time setting up this world and its conflicts that it barely has any time to develop the characters, who are so two-dimensional, it’s not clear if you really even could.

The plot concerns a Dhampir named Rose Hathaway (Zoey Deutch) who has been chosen to protect her best friend, Moroi princess Lissa Dragomir (Lucy Fry). Deutch is the daughter of actor Lea Thompson (Back to the Future) and director Howard Deutch (Some Kind of Wonderful). She has a peppy charisma redolent of her mom, and she’s a decent (if not wildly charismatic) presence onscreen. Fry is regal and gorgeous, as the role of Lissa calls her to be, but she gets the less fun activity of playing a damsel in constant distress. The movie is littered with failed attempts at pop culture zingers that feel wildly out of touch, not just for teen girls but for any character whatsoever, human or not. At its best, Vampire Academy reminded me of Buffy the Vampire Slayer, a high-concept horror-teen comedy that really found its footing only on TV. Vampire Academy feels like it belongs on TV, specifically the CW.

Anyone hoping Vampire Academy will be a goth take on Mean Girls with the teeth (and/or fangs) of Heathers will be disappointed. It’s easy to see how this movie got made: Put a bunch of things that are popular in a blender together, and it’s bound to be popular, too! But the next Twilight wasn’t about vampires, it’s about a dystopian battle to the death called The Hunger Games, and whatever replaces The Hunger Games in popularity will be about something entirely different. The Hollywood development process encourages clueless cash grabs like Vampire Academy, and they tend to be incredibly dated and feel passé by the time they actually roll out. I’m convinced Mark and Daniel Waters could have made a much better vampire high-school movie than this, if they hadn’t been forced to stick to the structure of the Vampire Academy books. Say what you will about Twilight, it tapped very deeply into the sexuality of a lot of teenage girls. In Vampire Academy, the heroine is stuck lusting after a much older Russian gym instructor named Dimitri (Danila Kozlovsky), who in a particularly unaware touch, sports a robust ponytail.

But let’s not condemn all things vampire-related. Amy Heckerling’s Vamps, which came and went in 2012 without much fanfare, is actually a hidden gem. It’s another vampire-themed sis-mance, starring Heckerling’s Clueless muse Alicia Silverstone and B in Apartment 23’s Krysten Ritter as Goody and Stacy, two New York party girls who slake their bloodlust by drinking rats and mitigate each other’s boredom with living for centuries on end. Goody and Stacy were both turned into vampires sometime in their twenties, which means they live a fantasy life of being in college forever, never looking any older, and being free to go clubbing and chase boys every night. They are supportive and caring of each other, never competitive, and run rampant through the streets of New York together like a bloodsucking take on Frances Ha. 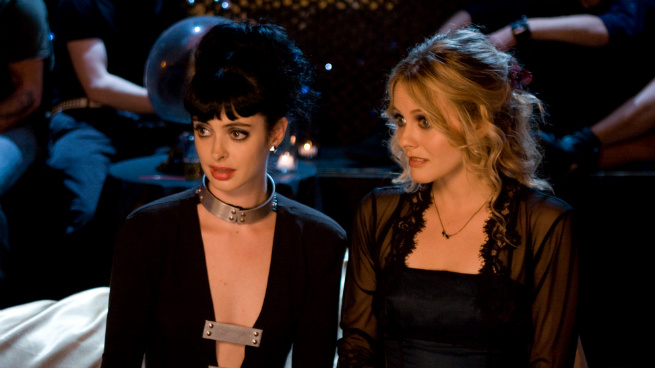 Despite the breezy tone of Vamps, the subject matter allows Heckerling to take on some very heavy issues. What does it mean to get older in a culture that primarily values women for their youth and beauty? When do you give up on staying abreast of current pop culture and accept that you probably can’t keep up forever? Are there any advantages of becoming an older woman that outweigh the privileges automatically awarded to you as a cute young girl? Vamps never hammers too hard on these ideas. It has a much lighter touch on the subject of women and aging as seen through the supernatural than, say, American Horror Story: Coven. Heckerling doesn’t judge her characters for being shallow, nor does she equate a certain kind of superficiality with stupidity. She allows her characters to learn, grow, and become spiritually aware without losing their interest in fashion.

At 37, Silverstone is in an age range where actresses are supposed to slink quietly into playing wives and mothers without complaint, while watching their male peers receive their meatiest roles yet. Vamps plays off this with one of the most romantic May-December relationships I’ve seen in a film recently, between Goody and Danny (Richard Lewis), who was her great love in the ’60s. While Danny moved on with his life and found new love, Goody, unable to age and change along with him, chose to leave without an explanation. She retreated back into her extended postadolescence, which takes the shape of a crash-pad apartment with coffin beds, the walls lined with posters and hipster memorabilia from every decade. Goody’s memories of past eras stack on top of each other, but to her they are all as immediate as when they occurred. She looks out at the New York landscape and can describe each iteration of a building, how it transformed from farmland to metropolis. Goody learns she can love each iteration of a person similarly. Wrinkles, weight gain, and no longer being young and cool don’t matter as much as her young-looking self had assumed they would. Decades later, she still sees Danny as the same handsome, charismatic guy he was when they were in love. He is still handsome and charismatic, just older and burnished by accumulated experience. Everything else is of secondary importance when you’ve fallen for someone’s soul.

Vamps is a valentine to comedic actresses, female friendship, and allowing women to age on their own terms. Wallace Shawn and Sigourney Weaver turn in great supporting performances, Ritter and Silverstone generate incredible chemistry, and the explanations of the movie’s self-contained vampire mythology are mercifully brief. It’s bittersweet to think about what Silverstone’s career could have been like had Hollywood not declared her D.O.A. after Excess Baggage and Batman & Robin. She is as funny, winning, and pretty as she was as Cher Horowitz in Clueless. She doesn’t seem all that bummed to have traded in the screen-goddess treadmill of doom for life as a vegan hippie. It’s exactly what we’d hope might have happened to Cher after high school: She’d matriculate at some liberal arts college, and end up trading in material possessions for a more satisfying, less superficial life.

Vampire Academy and Vamps both explore the fallacy of nostalgia, while demonstrating the impossibility of remaining current for all eternity. If you’re only as successful as your last big hit, what happens when the trends change? You can’t cling to one era of music, or one style of dialogue, but you’re destined to be most fond of whatever was popular when you were discovering your own taste, and it’s inevitable that you’ll find yourself unable to relate to the kids. Even if you feel like you still relate, the kids might see you not as a peer but as an uncool old grown-up, desperately trying to cling to memories of being young. Maybe you’ll actually be happier when you finally do let go.