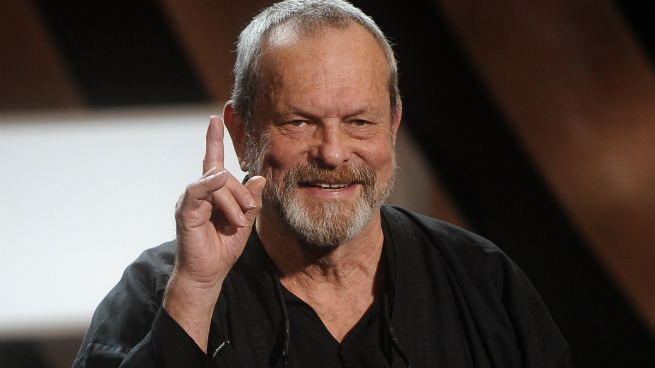 If you’re Terry Gilliam, your 15-year pursuit of trying to make Don Quixote into a film has got to feel like starring in your own metafiction. Gilliam is known for his bad luck — the money-guzzling The Adventures of Baron Munchausen, a studio feud with Universal during production on Brazil, the “dilemma” caused by Heath Ledger’s death a third of the way through filming The Imaginarium of Doctor Parnassus — but none of his projects have come close to suffering the doom and gloom of what has befallen previous attempts at The Man Who Killed Don Quixote. In 2000, modern annoyances (noisy aircrafts), mortal issues (star Jean Rochefort’s herniated disk), biblical-style disasters (a flash flood), and Hollywood problems (a $15 million insurance claim) thwarted production — Gilliam’s third try, by the way — but resulted in a documentary, Lost in La Mancha, that likens Gilliam’s quest to that of Miguel de Cervantes’s delusional hero. But hey, when you’re stuck in a narrative like the one Gilliam has found himself in — dreaming the impossible dream — maybe you have no choice but to keep going, and so he is. Gilliam is taking a seventh crack at his project, and announced he will begin production this fall in the Canary Islands.

Quixote is Gilliam-bait, despite him pitching it before he’d read the book. In an interview with Salman Rushdie more than a decade ago, Gilliam called Cervantes’s text “extraordinary” and “wondrous,” and certainly it is, especially if you encountered it outside of a compulsory school reading list. Alonso Quixano, alias Don Quixote, becomes so enmeshed in chivalric fiction that he sucks everyone around him into his imaginary logic, one that rejects and challenges reality in a very Gilliamesque manner. The Man Who Killed Don Quixote was billed as a reimagining of the text à la A Connecticut Yankee in King Arthur’s Court, as a time-traveling adventure featuring a modern advertising exec whom Quixote mistakes for his sidekick, Sancho Panza. Whether that magical-realism punch will remain in the forthcoming incarnation remains to be seen, but if you’re a fan of Gilliam’s, you know it probably does. A “doodle” posted to Gilliam’s Facebook page last month pictures Quixote’s windmill giant captioned with “Will we get the old bastard back on his horse this year? Human sacrifices welcomed. Stay tuned.” The first rule of working on a cursed project is to never say “human sacrifices welcomed,” but let’s just knock on wood and forget about that for now.

Past would-be cast members have included Rochefort and Robert Duvall as Quixote and Johnny Depp and Ewan McGregor as pseudo Panza (in the 2000 and 2010 efforts, respectively), and also Miranda Richardson and Depp’s ex Vanessa Paradis; there’s no word on who would join Gilliam’s latest version, and as The Hollywood Reporter points out, Duvall (who last month claimed he was still attached to the project) is, at 81, not necessarily the kind of person you want to stick in a saddle if you’ve had a history of unfortunate events on set. Gilliam has recruited producer Adrián Guerra to his team, and his youth (Guerra is 29) means he has yet to encounter the stuff of which cynics are made: floods, Hollywood, the fragile spines of mature actors.

[SPOILER ALERT — BUT REALLY, WASN’T DON QUIXOTE FOISTED UPON YOU AT SOME POINT IN YOUR LIFE? THIS SPOILER WOULD BE ALL YOUR FAULT ANYWAY.] Quixana, on his deathbed, realizes Quixote was a regrettable farce which he lived in a kind of dream state. He sours on chivalry entirely, and dies, in Part 2 of the book, knowing the misadventures he embarked on in Part 1 were read by a large audience. The world wouldn’t bend to accommodate Quixote’s vision of it, and, so far, neither has the world been particularly hospitable to allowing Gilliam to just make the damn movie. “I actually just want to make it and get rid of it,” he said last November, “[and get] it out of my life.” Unfinished business can be haunting, and giving up can make the whole endeavor seem like a farce. Letting the issue drop would make for an unsettling, unsatisfying ending, and 15 years is a lot of personal plot investment for Gilliam (and anyone following the film’s plodding trajectory). It can’t be abandoned after all this time; it would be better if it exploded than if it were shelved and forgotten.

The script has been edited and altered over the years to be more considerate of budgeting constraints (as Gilliam told Empire, “Maybe [this draft is] better, it’s certainly slightly smaller to fit into the new clothing we wear […] which are cheap clothes these days”). If financing falls through, Gilliam could always consider doing a Quixstarter campaign. Quixote has made him into a sort of Captain Ahab fishing for his magnum opus, and it may be that there’s nothing that can protect him against another challenge that might destroy the whole thing — but like all storytellers, he has to find out. It’s deus ex La Mancha–na.