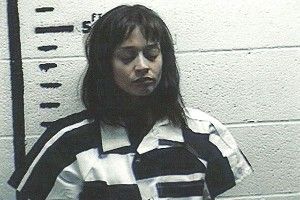 For years I have had a recurring anxiety dream where I am going through a security checkpoint and realize too late that I’m carrying weed. Yesterday Fiona Apple made my anxiety dream an anxiety reality when she got nabbed on drug possession charges while passing through West Texas, forcing her to postpone shows in Houston and Austin. A mugshot surfaced shortly thereafter on TMZ, showing Apple with her eyes closed in a deep “this world is bullshit” trance. The miserable-looking mugshot was quickly papered all over the Internet, Fiona’s dark brown mid-length cut with bangs recalling Jane Fonda, another celebrity with her own arrest photo.

Apple was released after posting a $10,000 bail. Snoop Dogg, Willie Nelson, and Armie “Winklevoss Twins” Hammer have all been busted at the same border patrol checkpoint in Sierra Blanca, which is conveniently located off major cross-country thoroughfare Interstate 10. Police say that drug-sniffing dogs sussed out the ganja, which was concealed fairly obviously in Fiona’s backpack. The four grams of marijuana were worth a ticket, but the presence of a similar amount of hash bumped it up to a felony. During promotion for The Idler Wheel… Fiona gave a series of intimate interviews where she openly discussed self-medicating her OCD and social anxiety with marijuana, often self-medicating right in front of the interviewers.

The reaction around the Web yesterday centered on whether the oversize striped blouse she is seen wearing in her mugshot was a jail uniform or just another one of Fiona’s unpredictably random fashion choices (one commenter: “Is that FILA?”), the inanity of the drug war with regard to the relative harmlessness of weed and hash versus more serious controlled substances peddled by the likes of Walter White, and how this will affect those Texas tour dates. A commonly expressed desire involved swaddling the frail-looking Apple in fluffy blankets and spoon-feeding her hash-infused gravy.

Of course, Fiona has made it clear over the years that she requires neither excessive sympathy nor coddling from her fans, all good intentions and gravy boats aside. She has always seemed chronically self-possessed. I imagine that she will be fine, if a bit more careful about where and what she’s holding from here on out. The Texas gigs will likely be rescheduled right away. The good news is that if she ever feels like seriously switching things up in the future musically, she’s just laid the groundwork to reinvent herself as an outlaw country star.