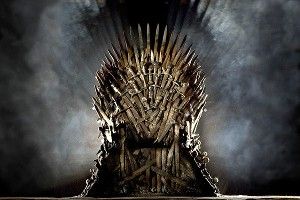 There was a time when a slavishly authentic Galactic Empire Storm Trooper costume was such a highly prized, inaccessible pop culture collectible that its purchase became a punchline/marker of wealth for sitcom characters like Barney Stinson (Neil Patrick Harris on How I Met Your Mother) and Monica’s boyfriend Pete (guest star Jon Favreau on Friends). But now that any jerk who ever had a thousand dollars to rub together can buy one off Amazon (though, be warned, it’s not Prime-eligible), the price of ultra-fandom has gone up. A lot.

Dave Itzkoff of the New York Times ArtsBeat blog reports that HBO can now sell you a replica of the titular furniture from Game of Thrones! (Finally, a seat fit to replace my horn chair! I mean, I still like it, but I feel like it might be responsible for the slightly cow-y smell in my study.) Before you shell out for it, though, here are a few things to consider.

• It’s probably not appropriate for households with children or pets or anyone who’s kind of clumsy: Even though it’s not made of steel, it still features lots of pointy bits.

• It weighs around 350 pounds, so think really hard about where you want to put it, because you probably won’t feel like moving it around much.

The original throne was the centerpiece of the show’s ad campaign last season, so for HBO to make this piece of memorabilia available to fans makes sense and is a good start as far as Game of Thrones collectibles go, but I’m going to wait until the network starts selling dragons.