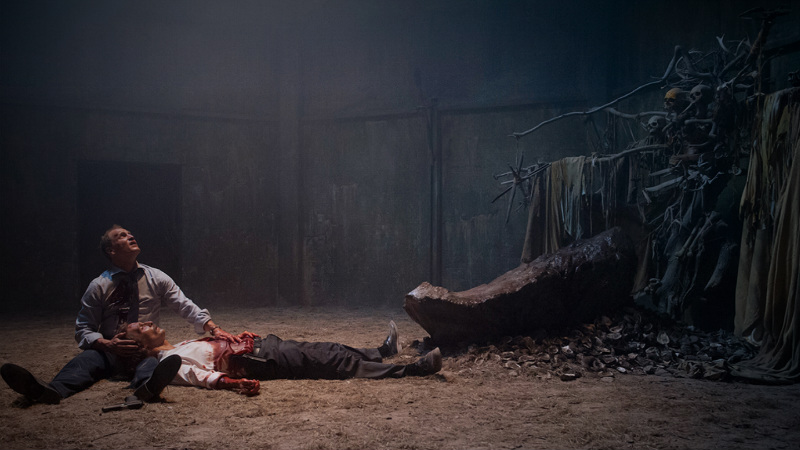 There’s too much of a focus on endings in narrative fiction. People expect movies to climax in the third act with a big set piece, for books to wrap everything up in the last chapter and make some grand statement, for a TV show’s finale to be the best episode of all. True Detective laid a trance on viewers that was broken when the final episode’s credits rolled. With no more mystery to unravel, no more clues to parse or insane Internet theories left to populate the space between Sunday nights, viewers had to make peace with the idea that the long, strange trip was over. (At least for now, until there’s a director’s cut Blu-ray with deleted scenes from this season, or better yet, an official casting announcement about the next.)

The season finale answered all of TD’s looming questions, but some fans, having already opened so many mental doors into labyrinthine passages, were loath to see most of them get shut behind them. Fan speculation about who the show’s big bad would be led down some semi-plausible avenues (Marty’s father-in-law is the Yellow King!) and some sillier ones (the Yellow King is Maggie!). A lot of fan theories centered on the idea that Marty’s daughter Audrey would be directly implicated in the Carcosa cult’s misdeeds, even after the seventh episode revealed that she had grown up just fine. I was a little horrified by how many online comments were versions of “What a rip-off that Marty’s daughter didn’t get abused by the cult!”

Some of the red herrings that fan theorists seized on weren’t even intentional, according to TD’s director, Cary Fukunaga, but that was one of the show’s many pleasures. Because of its content and themes, it easily lent itself to Room 237–style wild speculation, fueled by its many “clues.” It’s easy enough to make up your own True Detective theory. Just combine the fact that Maggie wore a shirt with white six-pointed stars in Episode 7 with Rust exclaiming “L’chaim, fat ass!” at the sheriff in the last and you’ve got a perfectly good bunk theory about True Detective’s secret relationship to Jewish mysticism. I thought the theories were fun, and I also never put too much stock in them, because a work of art that can’t surprise me is no good. In the end I was totally surprised and satisfied by how True Detective wrapped up. But as much as I looked forward to the finale, I was already dreading getting cut off from the fizzy anticipation I felt each week while waiting for a new episode. A great mystery is about creating lots of possibilities and then slowly whittling them down to one. By Episode 4 of TD, it felt like everyone had started watching the show and they were excitedly communicating about it through social media. The midpoint was the show’s climax, in that it was the moment when the most possibilities hung in the air, when every new discussion about it seemed electric. To be a fan of the show was to submit to its hypnotic spell and find that you were surrounded by others.

A small but very vocal group of angry Audrey truthers aside, the finale delivered on all levels, unwinding the long tail of the Dora Lange murder and taking us to Carcosa while demonstrating what a lot of the show’s fans have known all along: It’s really about Marty Hart and Rust Cohle. Some viewers immediately started speculating that Rust and Marty died in the cave and the subsequent action was a dream, particularly Rust’s epiphany. But True D is not and has never been a fantasy show, despite its weird fiction embellishments. It takes place in reality, no matter how many freaky space holes open up at key points. True Detective is a show about how real-life trauma has a ripple effect, where damaged people damage other people. No tentacle monsters are needed to frighten the viewer, just a good hard look at how a broken system protects the abuse of power by the very powerful and crushes everyone else underfoot, an issue examined through fiction on virtually all of the prestigious cable dramas in some way. Even accent-affecting, flowers-making, hatchet-wielding Errol Childress is a poor pawn in the game of sex sacrifice chess. This doesn’t mean that Errol isn’t accountable for his actions, but there’s always a larger structure at work. If you were raised in an incestuous bayou pagan sex cult, who knows what kind of person you’d turn out to be?

True D took on some of the biggest false dichotomies — light and dark, man and woman, science and mysticism — and split them open to show their true, layered nature. With its circular structure and multi-tiered narrative, it filled in more character detail and world-building than a lot of shows manage to have in several seasons. Does the social media echo chamber affect how we watch shows? Instant access to platforms for viewing and commenting is fairly new, but it’s transformed the way people consume shows. I was an X-Files nerd and spent a lot of time reading Angelfire sites that archived all the data related to the show’s mythology and conspiracies. It was a slightly more primitive version of today’s obsessive frame-by-frame parsing. If True Detective didn’t peak at the very end, it was because it peaked every week. Each new episode enabled a new perspective on the ones that came before it. I found myself watching each episode several times, often going back to watch previous episodes and finding that each episode shed new light on all the prior ones.

The idea that there is a hidden layer of meaning underneath the obvious layer of meaning is seductive, particularly for True Detective, in which Rust’s hallucinations seem to give him a deeper read of the natural universe. There’s nothing wrong with a little LOSTing, as long as you don’t expect all (or any) of your theories to come true. True D sustained its creepy tone of excitement and dread over eight weeks — eight weeks in which we got to reread H.P. Lovecraft stories, learn about The Yellow King, and investigate the folk traditions of coastal Louisiana. The show’s Louisiana location was just as responsible for its success as the writing, directing, and acting. I wondered why Carcosa seemed so distinctly eerie, and found out it’s because they shot it at the ruins of the 19th-century Confederate base Fort Macomb. The past is embedded in the present, as if they were occurring simultaneously, and there’s nothing like a dilapidated Civil War–era site to remind us that America is so not different from any other fallen civilization whose relics and scars have been dusted over by the mist of time. You could not create a spookier Southern faux-Minoan labyrinth than one that actually exists.

True Detective felt less like a traditional TV show or a movie and more like a musical form repeating its themes in concentric circles and patterns, specifically a fugue. It established the major themes in the first episode, and then played them in different keys. Always the same song, but it sounded different every time. The macro problems, like the state not keeping track of hundreds of missing children, related intimately to the more micro problems, like how Marty ignored his own daughters. As a treatise on modern masculinity, it was far from holding the pitch-black cynical view it originally seemed to endorse. In the end, True Detective pointed toward redemption. For all its talk about the endless cycles of evil in the ether, it ultimately offered up the possibility that the circle can be broken. All it takes is self-awareness, the desire to change, and maybe a little bit of Carcosian comet pixie dust. Maybe we were just in a psychotropic fugue state induced by the show, but that seems like a pretty beautiful, well-rounded ending to me. L’chaim indeed, True Detective.