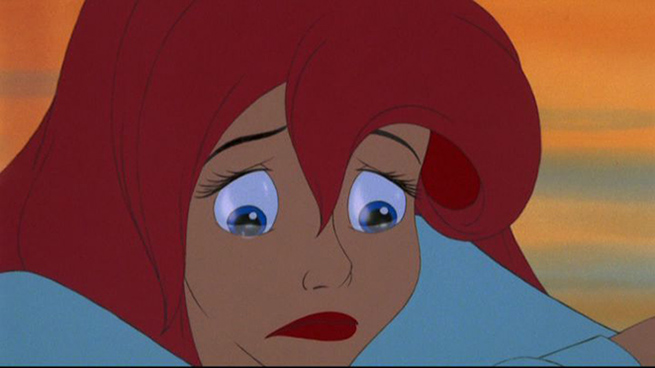 Today Deadline reported that Sofia Coppola, critically acclaimed filmmaker responsible for such introspective adult dramas as Lost in Translation and Somewhere, has signed on to direct an adaptation of Hans Christian Andersen’s beloved fairy tale The Little Mermaid. Though the script is set to be penned by Edward Scissorhands scribe Caroline Thompson, Grantland has obtained an exclusive excerpt from an early draft by Coppola herself. Keep in mind, this in no way reflects the final shooting script, but offers interesting insight into what Coppola’s vision of the classic fable might look like.

The Little Mermaid surfaces amid the gently lapping moonlit waves. In the distance, a SHIP. LM stares at it wistfully. Music swells. She swims closer.

LM looks up at the deck of the ship above her. Above her, a PRINCE, in luxe casual basics, surrounded by his CREW, an assorted group of scruffy-hip seafaring types.

CU on LM staring at Prince. A connection.

The Prince looks back at her. They catch eyes — something about the sea and how weird it is out here.

LM sits next to the Prince, who is unconscious after the shipwreck. She gazes at the sunrise over the ocean, bored. While she waits for him to come to, she picks up a SEASHELL and holds it to her ear.

We hear the voice of her SISTER inside.

… Hope you’re having a fabulous time on the surface, how amazing is dry land!? Oh my god, you will not believe what happened at the luncheon yesterday at the Coral Gardens. Audrina showed up in a new sea chariot, can you believe it? She and that new husband of hers have been on that kelp diet and she’s looking so radiant … I think it would be really good for you to try once you get back home, maybe it would put you in the right state of mind to finally settle down and have some merbabies! Wouldn’t we all love that! Anyway, love ya, sis, can’t wait to see all the Instaclams from your trip!

LM puts down the seashell and sighs. Nobody understands her.

The Prince starts to come to. LM hears him cough and turns to look at him.

That’s the last time I take a charter.

I think so. Are you?

She indicates her fish tail. The Prince nods.

What’s it like being human? Is it easier than being a mermaid?

It’s different. In the beginning, it’s hard … but it gets easier, the more you know who you are.

I still feel like I don’t know who I am.

You’ve got lots of time.

But it’s like … I spent my whole life under the sea. And now I’m here on land and … it’s different. I feel like I don’t really know what I want to do with my life. Like when I saved you from that shipwreck … I liked doing that but … it kind of felt like a dumb teenage phase, you know?

You’ll figure it out. How long are you on land?

I gotta go back today.

He sits up and brushes the sand off his shirt.

You should stay longer if you can.

I can’t. My family’s kind of crazy. They worry …

Long pause. The Prince smiles at LM. She smiles back, melancholy. There’s so much she wants to say.

Well, see you later, I guess.

LM dives back into the ocean. The Prince watches her go. Music swells.