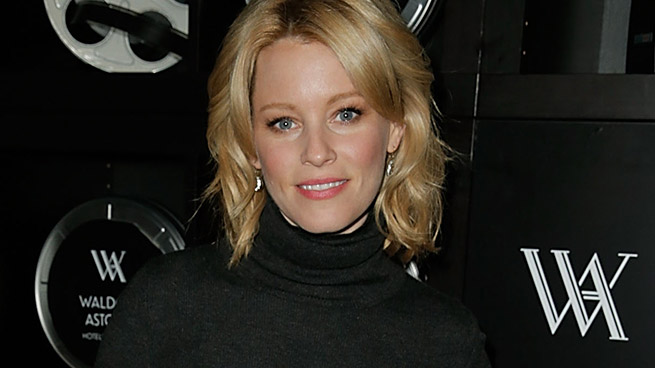 Exciting! Elizabeth Banks is about to boss it up and direct her first film with Pitch Perfect 2. The 2012 college a cappella musical — which was a surprise hit, raking in $113 million worldwide — was only Banks’s second production credit at the time. “Elizabeth originated the idea for Pitch Perfect and was instrumental in making the first film such a huge success,” Universal chair Donna Langley tells The Hollywood Reporter. “She brings an enormous amount of energy and experience to everything she works on and we’re thrilled that she is making her feature directorial debut on Pitch Perfect 2.” Know who else is thrilled? Comedy fans who’ve watched the new male vanguard try out the director’s chair  — your Francos, Rogens, Braffs, Batemans — while patiently waiting for some of our favorite comedic actresses to get behind the lens.

If you haven’t been watching NBC’s The Michael J. Fox Show, here’s a decent spot check.

Chris Pratt is definitely doing Jurassic World!! (Which is the name of Jurassic Park 4, not a place you get to sift through triceratops poop.) “For me, Jurassic Park was really kind of my Star Wars,” Pratt says. “And so it’s a big deal for me to be any part of that, let alone this part I’m going to be playing. I’m thrilled about it.”

A Long Way Down, a novel by Nick Hornby (High Fidelity, About a Boy, Fever Pitch), gives us four suicidal strangers who bump into each other on New Year’s Eve on a rooftop they’ve each chosen to jump from. Hopefully the movie’s good, because an Aaron Paul–Toni Collette–Pierce Brosnan–Imogen Poots foursome is a terrible thing to waste.
[protected-iframe id=”c601a3ec9ae919b5bd9b0733fad24940-60203239-57808363″ info=”http://c.brightcove.com/services/viewer/federated_f9?isVid=1&isUI=1″ width=”540″ height=”304″]

However, that trailer is too long, according to the National Association of Theater Owners. The group has made new (voluntary) guidelines asking for trailers to be kept to two minutes or less.

Breaking Bad writer/producer Moira Walley-Beckett just had her dark ballet drama, Flesh and Bone, picked up by Starz. Team BrBa! (Bonuses: Perpetual Quentin Tarantino producer Lawrence Bender will executive-produce alongside Walley-Beckett, AND they both used to be dancers!)

Every letter in the alphabet as interpreted through Beyoncé dance moves and poses. [via]

With each new Maleficent trailer, for some reason I start imagining what kinds of weird things we’re going to see Angelina Jolie eat in this role. Not because I can remember her doing that in any other role, or because I have intel on what exactly evil queens eat. It’s just a feeling. (PS Lana Del Rey scores the trailer.)

Margaret Cho will costar in Tina Fey’s non–Ellie Kemper pilot, the one happening at Fox. Cho will play the president of a women’s college opening its doors to menfolk for the first time.

Important and relatively easy-to-follow flowchart: Are You Eminem?

Phil Collins is writing with Adele, telling Rolling Stone he hadn’t really known her music beforehand. “I wasn’t actually too aware … I live in a cave, but she’s achieved an incredible amount. I really love her voice. I love some of this stuff she’s done, too.” Yeah, buried the lede there: Phil Collins … lives … in a cave.

And here are 91 books that used the Girl Who [Something Something] title construction in the five years since The Girl With the Dragon Tattoo became a big Barnes & Noble sensation.